The EU and Innovation: When Business Meets Politics

Innovation, entrepreneurship, growth and competitiveness go hand in hand. This short paper looks at two areas where the EU plays a role to help drive innovation: regulation and financing. 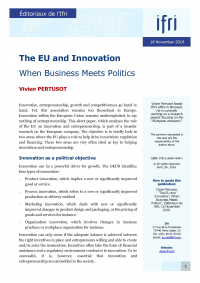 Innovation can only occur if the adequate balance is achieved between the right incentives in place and entrepreneurs willing and able to create and/or seize the momentum. Incentives often take the form of financial assistance and a regulatory environment conducive to innovation. To be successful, it is, however, essential that innovation and entrepreneurship are embedded in the society.

The European Union can play a significant role to foster innovation through the internal market. Its objective is to build a “highly competitive social market economy, aiming at full employment and social progress, and a high level of protection and improvement of the quality of the environment” (article 3.3 of the Treaty of the EU). Innovation is key to achieving this goal and to leading to greater productivity and competitiveness.

This imperative is ever more pressing as the EU faces two momentous challenges. First, the economic crisis has been impairing the already tarnished EU image. As long as unemployment remains high and growth sluggish in many Member States, citizens are unlikely to have a more positive view of the EU. Successful innovation with its positive consequences may not entirely reverse the trend of unpopularity towards the EU, but it would surely help. Second, European countries face greater global competition from usual places, such as the United States, but increasingly from Asia as well. This is a long-term trend, which is critical to factor in.

These two challenges question the role of the European Union. Since 2008, it has launched many policies to address deficiencies within the Eurozone, to decrease youth unemployment, or to provide funding to investment projects, with the creation of the European Fund for Strategic Investments (EFSI). Other policies are expected to bolster growth, and intrinsically innovation, such as the launching of a Capital Markets Union.

Innovation is therefore a primary political objective for the Union. It can both help restore a more positive view in the eyes of the citizens and eliminate the risks of seeing the EU turning into a no-innovation’s land.

The EU and Innovation: When Business Meets Politics
Download
0.54 Mo
Keywords
Innovation European Union
Print this article
Back to top

The Missing Guest: Energy Efficiency in the Multilateral...

Strategic Calculation: High-Performance Computing and...
END_OF_DOCUMENT_TOKEN_TO_BE_REPLACED
What to expect from the COP26 Climate Conference? Shifts in global attitudes and...

In spite of President Biden’s Leaders Summit in April, there has been little improvement in...

Since 1983, the QUAD gathers every year, the SWP, RAND Corporation, Chatham House and...

Supercomputers and quantum computers: What roles in the technological power of Europe?...
Alice PANNIER