China and Africa: the Honeymoon is Over Africa in Questions, No. 22, July 2015

For the new geopolitical reality called “Chinafrica”, the future may not be destined to be as radiant as the official win-win rhetoric would have us believe. Although the beginning of the century was notable for the exponential development of Sino-African trade (which grew from $10 billion in 2000 to $210 billion in 2013), a series of emerging problems seem to be signalling that the Sino-African honeymoon is over and that we are back with the harsh realities of the globalised economy. 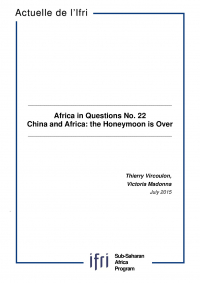 In 2008 two Chinese were killed in Equatorial Guinea by Guinean workers protesting against their working conditions. This incident occurred because the Chinese workers refused to stop work and take part in the protest. In 2012, the manager of a Chinese coal mine in southern Zambia was killed by two Zambian miners. More recently, in 2014, two people were killed and nine others wounded in Madagascar during clashes between the Chinese managers of a sugar factory and their Madagascan employees. This type of incidents is more and more frequent in Africa, and these violent clashes at work invariably revolve around the African employees’ salaries and working conditions. Chinese employers’ work practices have been highlighted by several NGOs - including Human Rights Watch in 2011[1]– and according to the Ethics Institute of South Africa, one of the chief causes of discontent among Africans[2] is the Chinese companies’ disregard for employment law. On top of this, Chinese goods are being imported on a massive scale at rock-bottom prices and what is more, the Chinese workforce has arrived (currently more than a million Chinese are thought to be living in Africa[3]). This translates into very strong competition from Chinese goods on the domestic African market, exemplified by the presence of Chinese shopkeepers even in rural areas of the smallest countries in the continent (Lesotho, Swaziland, etc.). Apart from working practices which border on exploitation, Chinese penetration of the African retail sector (a sector where it is very rare to find foreigners in Africa) is feeding anti-Chinese feeling among the population. In 2009, in the eastern suburbs of Algiers, clashes between Chinese and Algerian shopkeepers resulted in several shops being trashed.

Grievances are finally being heard

In several African countries the anti-Chinese feeling has forced the government to react, and in Zambia it even contributed to Michael Sata’s election as President, since his condemnation of the working conditions for Zambian miners in the Chinese mines became one of the main themes of his campaign. A wave of legislation regulating foreign workers is being developed in Africa in response to the influx of Chinese migrant workers. In the Democratic Republic of Congo a law was adopted in 2005 banning foreigners from working in retail. In Malawi, since 31 July 2012, foreign shopkeepers have been obliged to leave rural areas and must now conduct their business in one of the country’s four largest cities, with a minimum capital of 250,000 $. In Tanzania, Parliament has just adopted a law limiting work by non-nationals in the country. After restricting the employment opportunities for the Chinese workforce, several African governments have also cracked down on Chinese companies which fail to comply with national employment legislation. In Ghana, more than a hundred Chinese miners were arrested in 2013 and expelled for illegal mining. That same year it was non-compliance with safety measures which led the Zambian government to close a Chinese coal mine. And very recently, in Kenya, the owner of a Chinese restaurant who banned Africans from entering his restaurant after 5 P.M. was arrested.

The critical volte-face by certain African governments also extends to mining and oil contracts, which are now being minutely examined. In Gabon in 2013, the State decided to withdraw Addax’s oil production rights, accusing the company of tax fraud and of breaching environmental standards. In 2014 Gabon also took back the 75% of Belinga Mining Company (Comibel) held by the Chinese companies China Machinery Engineering Corporation and Pangang Group, who were due to implement a 1.6 billion mining project. Whereas in 2007, the two companies had promised to build a 560-kilometre railway between Boué, the deposit and a deep-water port from which the ore would be sent out to Cape Santa Clara, the project never materialised. In Chad,[4] the Djermaya refinery built by the Chinese in 2011 at the request of the Tchad authorities rapidly became the subject of tension with the government. In January 2012, barely six months after its inauguration, Chad’s Oil Minister announced that the refinery had closed due to persistent differences with the Chinese partner regarding the products’ sale prices on the domestic market and breaches of environmental legislation. The authorities even stated that the refinery’s Chinese manager was persona non grata in the country[5]. Lastly in 2007, the government of Angola, China’s main oil supplier, cancelled a contract with the Chinese company Sinopec for the construction of a refinery in the port of Lobito – a 3 billion dollar project –, sending its partner a strong message about its determination to renegotiate more balanced contracts.

These measures, some of which are drastic, are proof of the growing mistrust on the part of certain African governments in relation to China. They demonstrate these governments’ heightened awareness of the imbalance in Sino-African economic relations and the sometimes negative impact this represents. Moreover, Lamido Sanusi, a former director of the Nigerian national bank, has stated: “So China takes our primary goods and sells us manufactured ones. This was also the essence of colonialism”[6]. This trade relationship accentuates the African economies’ dependence and specialisation as far as natural resources are concerned, and hampers their efforts at industrialisation. Unable to rival the Chinese in terms of competitiveness, the African countries have seen their domestic market invaded by Chinese products, to the detriment of local production where that exists. Hardly surprising that out of the 15 countries surveyed by the Ethics Institute of South Africa, a negative view of the Chinese presence was most common among the people of South Africa, Zambia and Nigeria; and that Jacob Zuma, South Africa’s President, has appealed for more balanced Chinese/African relations.

The honeymoon between Africa and China is well and truly over. The magic of the early days is in the process of giving way to a more mature, more pragmatic relationship. A number of African governments have realised that it was only up to them to take initiatives to redress the balance in their economic partnership with China. The Chinese authorities, for their part, are also aware of the criticism and of the rise in hostile feeling among the population. After Michael Sata’s election, the Zambians and the Chinese managed to reach an understanding on new, more balanced economic agreements. And in March 2015 China announced that it had chosen Kenya as the centre for its new industrial hub and would be promoting a new cooperation model there. China is committed to financing an industrial park which is to be created in Mombasa, and an industrial zone along the Standard Gauge Railway Corridor, to enable Kenya to improve her trade balance with China and to give her exports preferential access to the Chinese market. The future will show whether China can make a positive contribution to Africa’s industrial development.

China and Africa: the Honeymoon is Over
Download
0.31 Mo
Keywords
Economic development Investment Africa China
ISBN / ISSN:
978-2-36567-422-5
Print this article
Back to top

Building Bridges over the Blue Pacific. Beyond Marine...
END_OF_DOCUMENT_TOKEN_TO_BE_REPLACED
Asia after the War in Ukraine: Re-imagining multilateralism and the risk of...