Benjamin Haddad, research fellow at Hudson Institute in Washington D.C., reviews Wess Mitchell’s nomination for Assistant Secretary of State for European and Eurasian affairs. According to Haddad, as U.S. President Donald Trump struggles to appoint leaders to his administration, Wess Mitchell, who awaits the U.S. Senate’s confirmation, could be a wise choice. 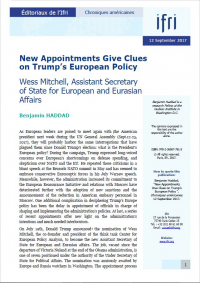 As European leaders are poised to meet again with the American president next week during the UN General Assembly (Sept.12-25, 2017), they will probably harbor the same interrogations that have plagued them since Donald Trump’s election: what is the President’s European policy? During the campaign, Trump expressed long-voiced concerns over European’s shortcomings on defense spending, and skepticism over NATO and the EU. He repeated these criticisms in a blunt speech at the Brussels NATO summit in May and has seemed to embrace conservative Eurosceptic forces in his July Warsaw speech. Meanwhile, however, the administration increased its commitment to the European Reassurance Initiative and relations with Moscow have deteriorated further with the adoption of new sanctions and the announcement of the reduction in American embassy personnel in Moscow. One additional complication in deciphering Trump’s Europe policy has been the delay in appointment of officials in charge of shaping and implementing the administration’s policies. At last, a series of recent appointments offer new light on the administration’s intentions and much needed interlocutors.

On July 19th, Donald Trump announced the nomination of Wess Mitchell, the co-founder and president of the think tank Center for European Policy Analysis, to become the new Assistant Secretary of State for European and Eurasian affairs. The job, vacant since the departure of Victoria Nuland at the end of the Obama administration, is one of seven positioned under the authority of the Under Secretary of State for Political Affairs. The nomination was anxiously awaited by Europe and Russia watchers in Washington. The appointment process has been notoriously slow; burdened with internal strife and the White House’s desire to avoid appointing any of the “Never Trumpers". While it is understandable the President would want to prioritize loyal followers, keeping a blacklist of experienced experts will deprive the administration of key Republican expertise on foreign policy issues.

Conversely, should foreign policy experts accept to serve in the Trump administration?  There are differing responses to this question. Some argue that in a chaotic administration dominated by an erratic president, it is a waste of time or worse: an ethical flaw. Others contend that if competent internationalists refuse key positions, others who espouse a more Trumpian worldview will gladly take them; worse, the president will be left to his own device in times of crisis. Deciding to join the administration, however, begs the question of how one can best serve his country under this president’s authority? One option is to attempt to circumvent the president through the bureaucracy, box him in, at the risk of disdaining democratic legitimacy. Another way is to try to change his mind; an option Defense Secretary James Mattis defended recently, citing torture and NATO: “This is not a man who is immune to being persuaded if he thinks you've got an argument."

This may be why committed and respected transatlanticists have become major appointees on European issues. Fiona Hill, a former senior fellow at Brookings Institution and author of an acclaimed Putin biography, is the Senior Director for European and Russian Affairs at the National Security Council while Kurt Volcker, executive director of the McCain Institute and former ambassador to NATO, was recently tapped as Special Representative to Ukraine.

On certain key issues, however, this seems to be an audacious venture. Trump has espoused a number of his foreign policy views for decades, carrying them during the campaign and, to a lesser extent, since the start of his presidency: working with strongmen like Vladimir Putin, questioning the cost and utility of American alliances or rejecting free trade deals. An efficient approach could be to follow some Trumpian rhetoric while keeping to the main pillars that have made American foreign policy successful: alliances, free trade, and containment of revisionist powers. Could internationalism be made compatible with “America First”? Such a strategy would frame mainstream arguments differently: focusing on power rather than norms, U.S. credibility rather than international commitments, and confronting enemies rather than defending allies.

In this context, it is worth looking at The Unquiet Frontier, published before the presidential election by Wess Mitchell and his colleague Jakub Grygiel (Princeton, 2016). A sophisticated critique of Obama’s foreign policy and roadmap for the upcoming administration, The Unquiet Frontier is a defense of America’s alliances, especially with vulnerable frontlines countries, as the cornerstone of U.S. foreign policy. The book defines the main purpose of American grand strategy as “to prevent the emergence of a power, or combination of powers on the Eurasian landmass that could invade or economically dominate the United States. Of all the possible strategies (containment, retreat, etc.), the authors argue that the three clusters of alliances in Europe, the Middle-East and Asia provide the greatest asset for American power projection, which constitutes the main glue for the American-led world order. As the authors put it: “whatever other advantages some rising powers may seem to have in the way of economic growth, ideological fervor, or revisionist determination, they have few allies.”

The originality of Unquiet Frontier is to focus on the importance of smaller frontier allies like the Baltics or Poland in Europe. Those states are situated in the “rimlands”, the zones at the interactions between US allies and revisionist regimes.  These zones will have a “disproportionate impact on the shape of the 21st century” (…); “if the rimlands are populated by states that are stable and free, then revisionist powers will face an uphill climb to directly challenge the U.S.” In this respect, “France and Australia are valuable allies, but, unlike Estonia or Taiwan, they do not exist on or near territories that rivals covet as prerequisite to global competition with the United States.” As rising powers are uncertain of the margin they have to challenge the status quo, they will look to “low-cost revision – marginal gains that offer the highest possible geopolitical payoff at the lowest possible strategic price.” One such strategy is called probing, when revisionist states challenge the U.S. through low intensity methods at the outer-limits of its power position while avoiding direct confrontation. It is in confrontations such as the Russo-Georgian war, Ukraine, or the Senkaku Island disputes that allies like adversaries will test the reliability of U.S. power.

These alliances have been threatened by converging trends in the last few years: the rise of revisionist states claiming spheres of influence “that overlap with the regions where America’s alliance obligations are highest and its strategic reach most constrained”; but also domestic evolutions like rising budgetary constraints and the temptation to pursue Grand Bargain deals with large power rivals. This last point meant to criticize the Obama administration could easily today read as an indictment of some of Donald Trump’s intuitions. According to the authors, the deprioritization of alliances among U.S. policy-makers can be explained by the combined effects of an over-confidence in an insular geography, technology that render threats manageable remotely (missile defense, drones, etc.) and an increasing ideological rejection of American international commitments. However, if alliance management is frustrating, time-consuming and expensive, the alternatives, although tempting in the short term, would threaten U.S. interests and necessitate more costly interventions in the long run. One such alternative, at the heart of Obama’s Reset and Trump’s campaign rhetoric (“why can’t we get along with Russia?), is seeking a Grand Bargain with a rival great power at the expense of frontline allies. Such policy is often ineffective, will embolden revisionist countries and erode American credibility. As a response to U.S. de-emphasis on alliances, some allies have increased their defense spending and military autonomy. While generally welcome, this development could also lead to destabilizing ventures such as countries developing nuclear deterrence capacities or a temptation to accommodate and bandwagon rising powers.

The value of American alliances, on the contrary, should only increase in the years ahead: “As the margins of relative power narrow, the weight of even smaller allies will matter more than it did in the immediate post-Cold War era. A tighter global military balance in which the United States spends less and its rivals more will increase the “force multiplier” value that America derives from even small allies – many at the frontier are increasing the funding and sophistication of their militaries.” Interestingly though, Mitchell and Grygiel’s argument is not a plea for today’s much-discussed concept of liberal order or for multilateral norms but instead for what they dub “the Rimland imperative”: “America’s strategic goal should not be to defend some abstract global architecture or global principle but to defend specific states against specific threats.” To do so, America must strengthen and empower regional allies by bolstering the two pillars of extended deterrence which have been the most eroded: political will and military effectiveness. To remove the perception that the United States may lack the political will to make good on its security commitments, U.S. policymakers must invest in building relations with allies. This means empowering the states that are already involved in resisting rival powers like Poland or Japan. Such states represent “hubs” through which the United States can buttress weaker allies or nudge more reluctant ones (like Bulgaria or Hungary) to position themselves more clearly against the revisionist power. Some of the book’s prescriptions can be seen as controversial: encouraging sub-regional groupings sometimes at the expense of NATO, or de-emphasizing issues like democratic governance to focus on pragmatic security cooperation against Russia. Furthermore, Washington should encourage border countries to drive up the cost of aggression by investing in territorial defense, in both border and insurgency defense. While U.S. military guarantee is the only credible deterrence against full-on aggression, it is weak “without strong local defenses which can be provided only by a standing basis by the frontier ally. Without local defensive capabilities, extended deterrence is fragile, in particular in the case of a limited offensive war; without an extended deterrent, local defense by small states facing more powerful neighbors is sacrificial.”

Not yet confirmed at the time of writing, Mitchell will have to work within the constraints of a State Department bureaucracy probably diminished by budget cuts and an administration dominated by military figures: Defense Secretary Mattis, National Security Adviser McMaster and White House Chief of Staff Kelly. Nevertheless, his book, with a focus on empowering regional allies who defend themselves, countering threats rather than building multilateral norms, and confronting strategic adversaries rather than lecturing partners on democratic governance, can provide a framework to reconcile a policy of internationalism and commitment to alliances with some of the president’s nationalist rhetoric.