For anyone who still harbored doubts, Washington made crystal clear from the announcement of the new trilateral alliance with Australia and the UK (AUKUS) that countering China is its number one priority, and that it will do whatever it takes to succeed. Much has been said about the consequences of AUKUS on the French-US relations, but the strategic implications for the Indo-Pacific nations (including France), and for China especially, are also critical to consider. 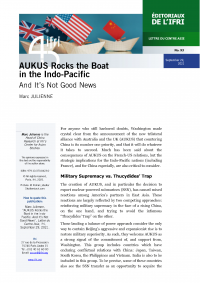 The creation of AUKUS, and in particular the decision to export nuclear-powered submarines (SSN), has caused mixed reactions among America’s partners in East Asia. These reactions are largely reflected by two competing approaches: reinforcing military supremacy in the face of a rising China, on the one hand, and trying to avoid the infamous “Thucydides’ Trap” on the other.

Those lauding a balance of power approach consider the only way to contain Beijing’s aggressive and expansionist rise is to restore military superiority. As such, they welcome AUKUS as a strong signal of the commitment of, and support from, Washington. This group includes countries which have enduring conflictual relations with China: Japan, Taiwan, South Korea, the Philippines and Vietnam. India is also to be included in this group. To be precise, some of these countries also see the SSN transfer as an opportunity to acquire the technology for themselves. India, which is a nuclear power and has already been working with Russia in this area, is most likely to be interested. In South Korea, voices could already be heard advocating for the launch of a national SSN program, a long-standing aspiration for Seoul, with or without foreign assistance.[1]

On the other hand, those following the “Thucydides’ Trap” approach fear that AUKUS may trigger an (nuclear) arms race and that the move dangerously exacerbates tensions in East Asia. Among them: Indonesia, Malaysia and Singapore. Thailand as well as China’s close partners, Laos and Cambodia, are likely to be included, although they have not expressed a clear position yet. Further afield, though directly impacted by Australia’s move, is New Zealand.

Indonesia declared it was “deeply concerned over the continuing arms race and power projection in the region”, and called “on Australia to maintain its commitment towards regional peace, stability and security”.[2] The two countries held a 2+2 meeting between their foreign and defense ministers in Jakarta on September 9, during which they “expressed their concern over the continued militarization of disputed features and encouraged all parties to exercise self-restraint in the conduct of activities and avoid actions that may raise tensions.”[3] Just as they didn’t signal their coming alliance with Washington and London to their French counterparts on August 30, Australian ministers seemingly gave no indication to their Indonesian partners.

Malaysian Prime Minister Ismail Sabri Yaakob also “expressed concern over the AUKUS cooperation, which will catalyze the nuclear arms race in the Indo-Pacific region”, and he anticipated that “it will provoke other powers to act more aggressively in the region, especially in the South China Sea.”[4] Malaysia’s defense minister, Hishammuddin Hussein, announced that he will go to Beijing to hold consultations with his Chinese counterparts.[5]

Singapore’s stance is less clear. During a phone call with his Australian counterpart, Scott Morrison, Prime Minister Lee Hsien Loong did not welcome the alliance. He stated that he “hoped that AUKUS would contribute constructively to the peace and stability of the region and complement the regional architecture.”[6]

Finally, New Zealand, a member of the Five Eyes, was not invited to take part in the alliance. One likely explanation is that Wellington is a strict anti-nuclear power and opposes any transfer of nuclear technology for military use. As such, the New Zealand authorities immediately announced that the future Australian SSNs will not be allowed in its waters. Moreover, Wellington is very much attached to its principle of independence and does not want to get drawn into the US confrontation with China.[7]

From this overview, we can underline that France is not the only country in the Indo-Pacific which doesn’t want to follow the US blindly and unconditionally on its risky path against China. The French and European vision of the Indo-Pacific, which are more about strengthening cooperation and dialogue with allies and partners in order to face rising threats in the region, is then not as isolated as some have argued.

Washington’s move is also fueling China’s rhetoric. First, AUKUS has reinforced the argument that the US is ultimately an unreliable ally.[8] This narrative grew notably during the Trump mandate, and Beijing doubled down on it when the Americans withdrew from Afghanistan last August, accusing Washington of abandoning its allies when it no longer needs them.[9]

Second, AUKUS is being used to galvanize nationalism at home, providing support for propaganda on China being under threat from the US. This is likely to incite China’s ongoing offensive strategy in East Asia. Over the past few months, China has increased coercion over its maritime neighbors through military airborne operations against Taiwan, Japan or Malaysia, the militarization of its coast guards, and the uninhibited use of maritime militia, notably against the Philippines. As a result, an even more aggressive attitude must be expected from China in the months to come.

With regard to Australia, already, Chinese official state media have been directly threatening Canberra. An editorial from the Global Times, for instance, reads: if necessary, “China will certainly punish [Australia] with no mercy”, and (…) “Australian troops are also most likely to be the first batch of Western soldiers to waste their lives in the South China Sea.” It goes as far as to provide military advice to Australia: “Recently, some in Canberra proposed an Australian missile defense system. We believe this is necessary.”[10]

Increasing the Tensions in the Indo-Pacific

While the Indo-Pacific concept has been gaining momentum among democracies globally over the past few years, AUKUS seems to have fractured this apparent convergence. By negotiating with Australia behind France’s back, the US has fueled the anti-American sentiment that is already widespread in France. It sidelined a firmly committed nation in the Indo-Pacific and the most active supporter of the concept within the European Union (EU). France was the first European country to publish its national Indo-Pacific strategy (2018), before Germany and the Netherlands (2020). Another questionable move was the announcement of the new AUKUS alliance by Washington, Canberra and London on the very day the EU released its own “strategy for cooperation in the Indo-Pacific”[11]…

In addition, instead of proceeding step by step, patiently and in concertation with allies and partners, Washington, Canberra and London triggered a global outcry with the surprise announcement of AUKUS and the still vague SSN program.

The hype around AUKUS and the SSN is misrepresenting the disruptive potential for the region. At first glance, the announced 8 SSNs in the Australian navy may significantly tip the balance of military powers in favor of the Americans (whose current SSN fleet is above 50, against a dozen for China).

However, while France’s Naval Group (and the American Lockheed Martin) was expected to deliver the first conventional submarine in the early 2030s, Australia will now have to wait at least another decade for the first SSN to be delivered. There are already talks about leasing SSNs to Australia in order to fill the gap.[12] Moreover, constructing harbor facilities and training nuclear engineer submariners will also take more time than the initial French proposal.

China currently has a fleet of 8 Type 093 SSNs, which it built in less than 15 years (in addition to 3 more Type 091 SSN and roughly 60 conventional submarines). The expansion of the fleet is ongoing with the next generation of SSNs coming out of Chinese shipyards in the next few years. As such, one may question the Australians’ hasty move to break the 6-year-old contract with Naval Group and change a whole component of its naval strategy. Canberra perceives an urgent need to balance China, but will now have to wait 20 years, instead of 10, to receive the first boat of its own. If there is such a rush to confront China, why take the longer road?

Finally, the announcement of the alliance and the SSN transfer has had a performative effect on the strategic balance in the Indo-Pacific. Although the military balance in the region will not drastically change anytime soon, China is going to update its strategy right away to preempt future unfavorable scenarios. To put it another way: in the long run, Australian SSNs may be good news for the Indo-Pacific, but in the short to medium-term, this move will only exacerbate tensions and increase volatility in the region.

[1]. J. Yu and E. French, “The US Should Support South Korea’s Nuclear Submarine Aspirations”, The Diplomat, September 20, 2021, available at: https://thediplomat.com.

[2]. “Statement on Australia’s Nuclear-Powered Submarines Program”, Ministry of Foreign Affairs of the Republic of Indonesia, September 17, 2021, available at: https://kemlu.go.id.

[7]. M. Lanteigne, “AUKUS without Us: New Zealand’s Responses to a New Indo-Pacific Alliance”, The Diplomat, September 19, 2021, available at: https://thediplomat.com.