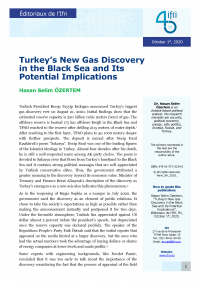 The offshore reserve is located 175 km offshore Ereğli in the Black Sea and Türkiye Petrolleri Anonim Ortaklığı (TPAO) reached to the reserve after drilling 2115 meters of water depth. After reaching to the first layer, TPAO plans to go 1000 meters deeper with further prospects. The deposit is named after Necip Fazıl Kısakürek’s poem “Sakarya”. Necip Fazıl was one of the leading figures of the Islamist ideology in Turkey. Almost four decades after his death, he is still a well-respected name among AK party circles. The poem is devoted to Sakarya river that flows from Turkey’s heartland to the Black Sea and it contains strong political messages that are well appreciated by Turkish conservative elites. Thus, the government attributed a greater meaning to the discovery beyond its economic value. Minister of Treasury and Finance Berat Albayrak’s description of the discovery as Turkey’s emergence as a new axis also indicates this phenomenon.

As in the reopening of Hagia Sophia as a mosque in July 2020, the government used the discovery as an element of public relations. It chose to take the society’s expectations as high as possible rather than making the announcement instantly and postponed it for two days. Under the favorable atmosphere, Turkish lira appreciated against US dollar almost 2 percent before the president’s speech, but depreciated once the reserve capacity was declared publicly. The speaker of the Republican People’s Party Faik Öztrak said that the initial reports that appeared on the media hinted at a larger discovery, but the ones who had the actual numbers took the advantage of buying dollars or shares of energy companies at lower levels and made profits.

Some experts with engineering backgrounds, like Necdet Pamir, reminded that it was too early to talk about the importance of the discovery considering the fact that the process of appraisal of the field still continues and the available data were limited. According to these experts, final results could be different than the initial findings in positive or negative direction. Even though these experts take a cautious position, refusing to speculate about the discovery, the debate still continues in economic and political terms.

The economic value of the discovery

The discovery can be categorized as a giant field. Turkey consumes 45-50 bcm of natural gas per annum and Sakarya field, in an optimum production level, has a potential to supply quarter of Turkey’s needs for about 25-28 years. The field is planned to pump gas in 2023, but it will take at least 5-6 years to reach its peak production. Thus, the expected contribution will be in the longer run. The gas prices are expected to recover after 2024 and hence Turkey can take the advantage of its own resources to decrease the cost of its imported energy bill. Considering this potential trend, International Energy Agency (IEA)’s director Fatih Birol says that its value can go up to $80 billion.

Government officials say that the current estimated value of the reserve based on the price that Turkey pays to third countries is around $64 billion. In market terms this value could go even lower. Considering the downward trend in the spot markets due to the oversupply of Liquified Natural Gas (LNG) and COVID-19, the LNG prices plunged in 2020 and hit below $1.7 per million British thermal unit (MMbtu) in June. Since then the markets have been recovering and spot LNG price tend to move above $2 per MMbtu. Thus, the spot LNG price is almost one-third of the gas price that Turkey receives via pipelines from third parties. Beyond its economic value, the finding is important to foster exploration efforts, which so far had been futile. In this regard, the debate on the value of Sakarya reserve has a secondary importance.

Minister of Energy and Natural Resources, Fatih Dönmez, says that Turkey has the capacity to develop the field on its own. Recently purchased drilling ships and seismic research vessels have strengthened Turkey’s exploration capacity. However, Turkey still needs to get contracting services from a third party to construct a deep-sea pipeline to convey the gas to Turkey’s onshore. After reaching to the onshore, Turkey has the capacity to carry gas to domestic consumers via its existing network.

Erdogan plans to commission the field for the Turkish Republic’s 100th anniversary in 2023. It is an ambitious target both in technical and economic terms. For this purpose, the final investment decision should be taken at the latest in 2021. The estimated cost to develop the field is around $3-6 billion. Thus, the government needs to allocate a multi-billion-dollar budget in parallel with the investment decision if it chooses state-owned TPAO to develop the field. This is a relatively reasonable amount considering the expected revenue from Sakarya field in the long run. Turkish gas monopoly BOTAŞ and TPAO have been under the umbrella of Turkish Wealth Fund since 2017. In case of an aggressive development plan, the government can decide to make the allocation from this fund. Another possible scenario is strengthening these companies’ financial basis through Initial Public Offerings (IPOs) in the near future. Still, negative macroeconomic trends and the dire conditions due to COVID-19 can be problems in financing such a huge project in the short run. There are also some conjunctural advantages. Considering the downward global trend in the cost of hydrocarbon field development there is a favorable environment that would help to downscale the expected cost of developing the field and squeeze the time schedule.

The finding will definitely give Turkey an upper hand in its relations with Russia. BOTAŞ and private sector’s contracts (in total 8 bcm per annum) with Gazprom will expire in 2021. These are long term, oil-indexed contracts and have “take or pay” clauses. In 2020, Gazprom has lost its dominant share in Turkey’s natural gas consumption. Turkey has recently opted for importing more LNG from the spot markets (particularly from the United States - US) rather than pipeline gas. After the capacity increases in LNG terminals and new Floating Storage Regasification Unit (FSRU) investments, Turkey’s  regasification capacity reached to 30 bcm per annum. Even though currently Turkey uses one-third of this capacity, the consumption pattern has changed dramatically. As the LNG imports increased, the share of Russian gas declined from 55 percent in 2015 to 33.6 percent in 2019. Ankara aims better terms in new contracts as Gazprom’s European partners managed to get in the last decade. The new discovery of the offshore gas field has a potential to contribute, along with Russia’s multi-billion-dollar investment in Turkish Stream and recently increasing volume of LNG imports, to Turkey’s position in negotiations.

Energy trade is an important area of cooperation between Moscow and Ankara. However, the Turkish side has been complaining about the unbalanced trade for a long time. The discovery has a potential to offer Turkey a leverage. Yet, the room to increase Russian gas supply to Turkey is getting dimmer in parallel with the new trends in the LNG market and Turkey’s energy consumption pattern. This is a hardcore reality beyond the discovery in the Black Sea.

Potential implications on Turkey’s position in the Eastern Mediterranean

Turkey accelerated its research efforts mostly as a political maneuver in the disputed areas in the Mediterranean. Therefore, after Erdogan’s first hints, many thought the new discovery was in the Mediterranean while soon it was clear that the reserve was located in the Black Sea. There is a long way to go before pumping the gas to Turkey, but the discovery will encourage further expeditions in the Black Sea and the Mediterranean. Compared to other littoral states, Turkey’s offshore capacity helps it to act unilaterally and bypass tender processes to get contract services from international oil companies (IOC). This gives Turkey a capacity to create de facto situation in the disputed areas. Now, Turkey has a chance to turn this advantage into cash. Moreover, depending on making new discoveries, Ankara can decide to bring third parties into the equation to ease the challenges in developing deep-water deposits. This is relatively a non-political arena in the Black Sea, but in the Mediterranean, such a move would definitely have further complications at political level.

The Gabonese Opposition Diaspora in France: A Political...

Prospects of a Hydrogen Economy with Chinese Characteristics

The Karlsruhe Court Judgment: A Thunderclap from a Clear...
END_OF_DOCUMENT_TOKEN_TO_BE_REPLACED
Trade, Investments, Technology, Climate Change, Human Rights:How should the EU Deal with...

A little more than 40 years since China's opening and reform it has risen to a comprehensive...

Conference with Harsh Vardhan Shringla, Foreign Secretary of the Republic of India

Conference/debate with Harsh Vardhan Shringla, Foreign Secretary of the...