Japan's Energy and Climate Policy: Towards Dispelling the Uncertainties Notes de l'Ifri, May 2015

Four years after the Great East Japan Earthquake and a few months before the opening of the Paris Climate Conference, Japan is about to clarify its energy and climate policy. 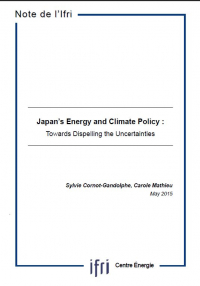 Already in spring 2014, the Cabinet of Prime Minister Shinzo Abe released the 4th Strategic Energy Plan, drawing the first lessons for the post-Fukushima era. The zero-nuclear scenario was abandoned, although it was established that dependence on nuclear should be as low as possible. Later in 2014, two expert panels were requested to work on quantitative targets for 2030, both in terms of future split between sources for power generation and in terms of greenhouse gas (GHG) emission reduction.

The Cabinet’s final decisions are expected for June 2015. The draft proposals are already known and suggest that Japan is determined to find a proper balance between system stability, energy security and cost control objectives on the one hand, and the need to reduce domestic GHG emissions on the other hand. Because this task is highly challenging, the government’s proposals are unlikely to gain unanimous support, neither domestically nor from the international community.

Taking into account the March 2015 decision to decommission five reactors, Japan now has 43 operable nuclear power plants with a capacity of 40.47 GW. Should all of them come back online, their total capacity would be sufficient to meet the draft 2030 target (20-22% share of electricity production), provided that electricity consumption does not rise significantly and that the lifetime of the nuclear plants is extended to 60 years. Although the approved restart of some nuclear units is a milestone for Japan’s nuclear industry and energy mix, there are still uncertainties around the scale and timing of the restart, in particular because of the local opposition.

Japan aims at increasing the share of renewable electricity production, which is set to reach 22-24% in 2030. Such target does not seem particularly ambitious, knowing that the country has ample hydropower capacity and that solar PV has already developed at a high speed since 2012. Concerns over the surplus on electricity bills and the challenges with grid expansion tend to argue in favour of a slower development rate for renewables. The need to control fuel costs is also pushing Japan to stick to coal as fall back option for base-load power production, in particular with the use of highly-efficient coal plants. The share of coal in the power mix should remain around 26%, almost on par with natural gas (27%). Determined to lower procurement costs, the government has also developed a new LNG policy, based on diversification of supply sources and modes of imports.

In this context, Japan’s climate leadership is questioned. Its energy mix choices cannot lead to a drastic reduction of its domestic GHG emissions, although further improvements in the area of energy conservation are expected. The draft target indicates that GHG emissions would be reduced by 26% in 2030 compared to 2013 levels, which only amounts to a 17% reduction compared to 1990 levels. Once committed to building a super energy-efficient nation, Japan’s climate strategy is now progressively shifting to external action, with the idea that overseas mitigation efforts will be more cost-effective. Japan has made great use of international credits and is now developing a new bilateral offset scheme with developing countries. Although its contribution to climate finance is significant, Japan is exposed to criticism on the international stage because of its support for coal power plant projects. While the clean coal technologies are presented as a major improvement - compared to the least-cost options, that developing countries would choose otherwise - Japan’s strategy is viewed by some as running against the ultimate objective of remaining below the 2°C limit.