From the dawn of China’s space program in the mid-1950s to the ability to build, launch and operate satellites in low Earth and geosynchronous orbits from the 1980s, the People’s Republic of China (PRC) is in 2021 a complete space power with autonomous access to outer space and to deep-space exploration. 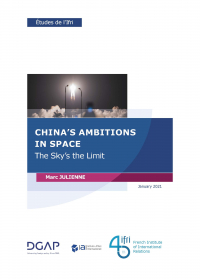 Today, China is on the verge of building its own space lab in low Earth orbit (LEO), possibly the only orbiting lab in a few years from now. During summer 2020, it launched an ambitious mission to Mars, which could help it catch up with other powers in the exploration of the Red Planet. It is also making rapid progress in its Moon explorations. In January 2019, Beijing achieved its “first world first” by landing a rover on the far side of the Moon, and in December 2020, it succeeded a most delicate mission in recovering lunar samples and returning them to Earth. Its plans are now to establish a lunar base by 2030. Closer to Earth, in the LEO, there are several Chinese projects of space-based internet constellations, albeit at a relatively early stage. Hence, the PRC is no longer an outsider, but an actual challenger to the great powers in space, including the US, although it still lags behind in terms of technology and means, both quantitatively and qualitatively.

China’s space doctrine is based on three pillars: national development, military empowerment, and great-power competition. The former two drove China’s development in space from the beginning of the program, while the latter is a characteristic that has been particularly intensified in the last few decades. Under President Xi Jinping, outer space is fully integrated in the “China dream of the great rejuvenation of the Chinese nation”, whereby outer space must contribute to make the PRC the number one “technological great power” by 2049.

These ambitions, which are presented as peaceful and to the benefit of all mankind, also have their darker side. China’s military activities in outer space are mostly unknown, causing anxiety abroad, especially since Beijing destroyed one of its own satellites in 2007, spreading thousands of pieces of debris in space and putting its reliability into question.

China’s space institutional landscape is interesting to study, especially because it is not as it appears. The Chinese space agency, the CNSA, is in fact a store front for international cooperation. The actual decision-making is to be found in the State Administration for Science, Technology and Industry for National Defense (SASTIND), as well as within the People’s Liberation Army (PLA), and especially the Strategic Support Force. Other actors are instrumental, such as the state-owned aerospace conglomerates CASC and CASIC, as well as the Chinese Academy of Science (CAS) and academia.

The commercial space industry has been a very dynamic sector for the past five years in China, prompting many to call it “new space”, as in the US. The Chinese commercial space industry intends to stimulate innovation and create new financing channels; however, the Communist Party (CPC) maintains strict control over aerospace activities. The liberalization of the sector is rather limited and private actors are barely competing with the giant state conglomerates. Looking closely at these new Chinese aerospace entrepreneurs, it appears that most of them come from the traditional aerospace industries or from the military.

Finally, there is a field where Beijing is increasingly active: international forums of space governance. Indeed, now that China is a major space power, it intends to make the most of international space law, while the US seems to have given up this path and gone on its own unilateral way.

Political conflicts on Earth concerning the outer space domain are likely to intensify in the coming years. Besides building national pride and international prestige, space is a strategic field where Beijing needs to fill the technological gap with the US, and where it is searching for US vulnerabilities. The question remains: Where does Europe stand in this strategic landscape?

This study has been carried out within the partnership between the French Institute of International Relations (Ifri), Deutsche Gesellschaft für Auswärtige Politik (DGAP) and Istituto Affari Internazionali (IAI).

On the same topic
Russia’s Space Policy: The Path of Decline?
Space as a Key Element of Europe's Digital Sovereignty
Revolutionary by Design: The US National Security State and Commercialization in the US Space Sector
China's Ambitions in Space: The Sky's the Limit
Download
1.19 Mo
Keywords
Governance Space strategy China Europe United States
ISBN / ISSN:
979-10-373-0277-9
Print this article
Back to top