The tough-on-China policy adopted by the Trump and Biden administrations has – and will increasingly have – important consequences for Washington’s allies, both on their infrastructure choices (5G, submarine cables...) and on their technological exchanges with China. 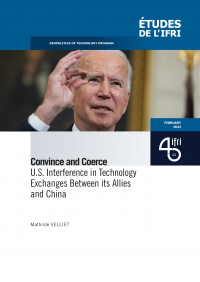 Indeed, the U.S. objective of slowing down China’s technological development has been translated into multiple policies, primarily targeting China but also – directly or indirectly – U.S. partners.
On the one hand, Washington deploys a range of coercive and incentive tools to prevent its allies from adopting certain technologies, supplied by Chinese companies and « untrusted » by American authorities (in terms of cyber, data or infrastructure security). Case studies of U.S. efforts against the deployment of Huawei’s 5G or Hengtong Group’s undersea cables reveal a similar strategy, combining direct diplomatic pressure, a threat awareness campaign, and financial incentives.
On the other hand, in line with the United States’ historical use of the extraterritoriality of its law and its position as an economic superpower to influence its allies’ decisions, Washington seeks to restrict transfers of critical technologies from allies to China. As the main manufacturers (along with the United States) of these technologies, American allies are increasingly constrained by these legal and diplomatic restrictions, which target one of their main trading partners and tend to extend beyond strictly military or cutting-edge technologies. For example, in order to limit sales of semiconductor manufacturing equipment, U.S. authorities are combining changes to the American export control regime with diplomatic efforts (bilaterally and multilaterally) to persuade allies to align their own export policies with those of the United States.
While the Biden administration appears to be placing greater emphasis on cooperative and incentive approaches, it seems likely that the multidimensional U.S. strategy serving these two objectives will continue, and even be strengthened.
Among allies (and especially in Europe), this trend has raised awareness of the security challenges posed by certain Chinese suppliers, but also of the risks associated with the growing coercive practices of the great powers.
Convince and Coerce: U.S. Interference in Technology Exchanges Between its Allies and China
Download
1.26 Mo
Keywords
5G semiconductor submarine cable Technology China Europe Japan United States
ISBN / ISSN:
979-10-373-0490-2
Print this article
Back to top

Mitigating Geopolitical Risk – Japan as a Stabilizer in...
END_OF_DOCUMENT_TOKEN_TO_BE_REPLACED
Has the European Union risen up to the challenges of geopolitics? Europe after the Czech...