Aligning its climate and industrial policies, the European Union (UE) is introducing sustainability requirements for the whole life-cycle of electric vehicle (EV) batteries. This initiative would not only ensure that EVs fit with Europe’s climate-neutrality and resource-efficiency pledges, but also give European new entrants a better chance to compete. 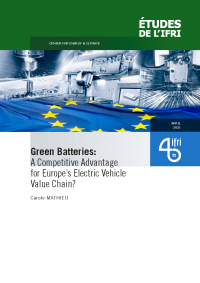 Since 2017, the EU’s nascent green industrial policy has made the EV battery value chain its favored experimental field. The wave of investments in battery cell manufacturing projects suggests that the worst-case scenario of Europe subsidizing massive battery cell imports will not materialize. Cell manufacturers have a direct commercial interest in setting up operations closer to the European automakers’ EV assembly factories, and Member States can provide an additional argument for local cell production with their large financial support for EU-based industrial projects. However, strategic autonomy remains a distant dream, as most confirmed projects are being developed by non-EU stakeholders. In addition, Europe has not yet managed to attract corresponding investments in the manufacturing of battery cell components, while its very limited control on raw material supply chains does not match its political aspirations.

Despite pressure from civil society, the lack of consensual calculation methodologies makes it almost impossible for manufacturers to substantiate their green claims, especially with regards to carbon footprints. Yet, the life-cycle assessment (LCA) literature points to cell and active material manufacturing as key climate hotspots. Thus, efforts should concentrate on reducing energy consumption for these critical production steps and covering incompressible needs with grid-based or contract-based low-carbon electricity, provided the latter option guarantees the additionality of renewable electricity supplies. In addition, the extraction and refining of raw materials offer the second largest and mostly untapped potential for green differentiation, especially when combining climate and local environmental impact considerations. Ultimately, manufacturing green batteries does not necessarily require locating all production steps in Europe, but European players may have a competitive edge thanks to their expertise in measuring and improving the sustainability of their operations. In addition, reducing the environmental footprint of products requires a holistic view of supply chain management, which pleads for building closer ties between industrial stakeholders.

Should the final text of the Batteries Regulation retain an ambitious timeframe for information and labelling requirements, it could be a game changer for the European EV market. The methodological and practical challenges should not be underestimated, but the best way to obtain robust implementation rules is to engage the industry in the drafting process. If the EU legislator confirms that customers should be able to compare the environmental performance of EV batteries as of 2023, companies should see the urgency of sharing their knowledge with the EC, and Member States will allocate appropriate resources to enforcement procedures. Likewise, the political signal will encourage EU automakers to place greater focus on sustainability in their ongoing supplier selection processes, instead of waiting for future industrial cycles to take serious action. The Batteries Regulation is not just about the EV value chain, it is an opportunity to demonstrate the high potential of Europe’s green industrial policy, delivering consumer trust, jobs, and strategic autonomy.