Japan’s policies in post-Soviet Central Asia, similarly to its actions in other Asian subregions, have often been interpreted recently as reactions to China’s advances – in particular, the Belt and Road Initiative. This first impression can be misleading. 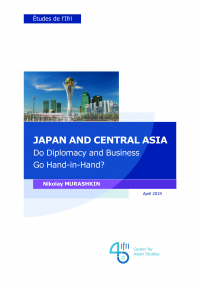 Japan’s relationship-building with the region has been taking place since the very independence of Kazakhstan, Kyrgyzstan, Tajikistan, Turkmenistan and Uzbekistan and has undergone various stages of development. At different points, Tokyo has had to reconcile sometimes mutually contradictory approaches of romanticism, value-oriented diplomacy, pragmatism and, to some extent, power politics.

Although scholars often extrapolate the Sino-Japanese rivalry observed in wider Asia onto Central Asia, the trend is less visible in this specific region. Here, Japan and China currently appear to be sticking to their own niches, while the strategic and geo-economic value of the region for Japan is comparatively lower than in other Asian subregions, such as Southeast Asia.

Currently, Japan appears to have definitively moved on from the regional diplomacy of grand designs that it had promoted in the past decades. It has rather moved toward pragmatic business development with Central Asia, while also maintaining its unique status – and soft-power credential – as a development sponsor. Although the region’s strategic importance is acknowledged in Japan’s diplomatic documents, the foreign policy of Prime Minister Shinzo Abe’s cabinets toward Central Asia has largely focused on commercial aspects rather than on geopolitical initiatives, marking a contrast with Abe’s predecessors from the early 2000s.

While Kazakhstan and Uzbekistan have traditionally been focal points of Japanese business presence in the region, Abe’s 2015 visit pointed toward the growing relative importance of Turkmenistan as an importer of Japanese technology. At the same time, the fanfare that accompanied that visit in terms of deal value is yet to materialize in concrete results. Despite Uzbekistan’s high industrial potential, its still strong aid ties with Japan and US$8.5 billion worth of contracts signed in 2015, in the recent years Japanese business presence in that key regional country has been developing below the expectations of Japanese stakeholders.

Changes in the development finance landscape have rather adversely affected Japan’s competitive edge and soft-power capability in Central Asia. At the early stage of relationship-building of 1990s, Japan’s position as top donor of Official Development Assistance (ODA) and an advocate of less politically conditional lending to the region advantageously differentiated it from other OECD donors. In the 2000s, this advantage diminished due to Japan’s ODA reduction and due to the improvement of Central Asia’s financial standings thanks to a combination of economic reforms in some of the countries, growing income from remittances, windfall income from the commodity super-cycle and the rise of non-OECD donors, especially China. Japan’s soft power has been consistently strong in the region, keeping local attitudes towards Tokyo extremely positive (in contrast with more mixed perceptions of China, for example), while also remaining difficult to directly convert into commercial deals. In the meantime, the focus of Central Asia’s needs has also shifted away from ODA to direct investment that Japan has more difficulties to address – unlike some of Japan’s competitors, such as South Korea.

Cercles dirigeants russes : infaillible loyauté au système...
END_OF_DOCUMENT_TOKEN_TO_BE_REPLACED
Asia after the War in Ukraine: Re-imagining multilateralism and the risk of...