Through development assistance and economic engagement, South Korea has sought to project itself as a different kind of partner for Africa. In reality, it is not so unique. 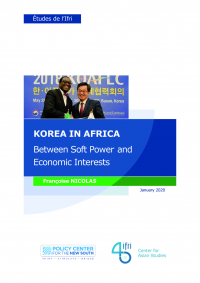 Economic relations between South Korea (hereafter Korea) and Africa began to develop in earnest from 2006, a year that marked a turning point with the launch of the “Year of Friendship with Africa” and “Korea Initiative for Africa’s Development”.

Nowadays, although Korean aid flows to Africa are constantly increasing, it remains a second-tier economic partner for Seoul. Neither trade nor foreign direct investments (FDI) exceed 1.5% of Korean totals.

In addition, economic relations between Korea and Africa are focused on a limited number of countries, but the priority partners for official development assistance (ODA) are not Korea’s main trade partners, nor the main recipients of Korean investments. So, a mercantilist explanation of Korean ODA is debatable.

Korea is primarily, though not exclusively, drawn to Africa by the continent’s wealth of natural resources (oil, gas and minerals), and the structure of trade between the two parties reflects traditional North-South relationships (raw materials for manufactured products). As such, Korea does not really differ from other industrialized countries operating in Africa.

Korea mainly emphasizes the uniqueness of its economic trajectory to appear as a different kind of partner, one that is more likely to contribute to the development of its African partners, but the reality is quite different.

Firstly, the uniqueness of the Korean economy is also due to the legacy of the developmental state, which combines the interests of the state and businesses. Some practices inherited from this time remain very present, with an emphasis on the defense of national economic interests. Under these conditions, the effects of Korean actions are unlikely to be beneficial for the recipient countries, whose interests take second place.

On the other hand, Korea continues to use ODA in Africa as an instrument of soft power to assert the uniqueness of its development experience, but the significant gap between the discourse and the reality of the Korean experience undermines the credibility of the discourse and its effectiveness. For instance, the “new villages” movement that Korea is looking to export to Africa is controversial. Its contribution to modernizing the countryside through empowerment is questioned and there is no guarantee that it could be easily applied to an African setting.

Finally, some other factors are hindering Korea’s potential positive contribution. In particular, the repeated scandals and other operational failures by Korean actors, whether private or public, impact on the country's credibility on the continent. Likewise, the complexity of Korea’s aid policy structure and the variety of objectives pursued by the different actors (the Korea International Cooperation Agency [KOICA] and the Economic Development Cooperation Fund [EDCF] at the fore) do not facilitate the implementation of a consistent approach towards Africa.

Given the still recent nature of its involvement in Africa, Korea is still at the learning stage. Measures recently taken by the Moon administration, like the establishment of the Korea-Africa Foundation, seem to be going in the right direction insofar as they should help to further Korean knowledge of Africa and encourage involvement by the private sector.

Neither surveillance nor algorithmic consumerism. Towards...
END_OF_DOCUMENT_TOKEN_TO_BE_REPLACED
Citizen Mobilization: A Solution for Refugee Integration in Europe?