This study assesses the prospects of a hydrogen economy with Chinese characteristics. Against the backdrop of an escalating US-China trade war and the ongoing novel coronavirus (COVID-19) pandemic, key Chinese stakeholders become increasingly interested in moving the hydrogen economy agenda forward. 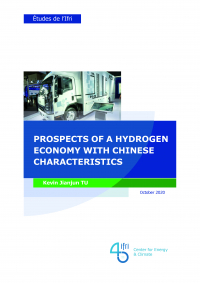 During the first six months of 2020 alone, 37 policies in support of the hydrogen economy have been published by various level governments, including 7 by central government authorities, and 30 by local governments. Shandong alone issued 6 hydrogen supporting policies, followed with 5 by Guangdong. In sum, hydrogen economy development not only gains traction in China, but also is in great danger of overheating.

The ambition in China is to expand hydrogen production and create new end-uses: in the transport segment (e.g. 1 million fuel cell electric vehicles – FCEVs – and 1,000 hydrogen refueling stations by 2030), but possibly also, in other hard-to-abate sectors such as steel and cement manufacturing or in the electricity storage segment (Power to X). Hydrogen production from low carbon electricity could bring many benefits, notably to address curtailments of renewable electricity from wind, solar and hydro. It could also be blended into the nation-wide gas grid especially for low-concentration hydrogen (e.g. 5-10%).

Until recently, China’s interest in developing the hydrogen economy has not been primarily triggered by the decarbonization objective. Nevertheless, on September 22, 2020, Chinese president Xi Jinping announced that China aims to peak national carbon emissions before 2030 and achieve carbon neutrality before 2060. Given the significant amount of carbon emissions reduction implied by the above announcement, hydrogen is now expected to play a much more important role to drastically decrease the country’s greenhouse gas emissions (GHG) over time.

China’s very large hydrogen production from fossil fuels, mainly coal, would make it quite challenging to consider decarbonizing the current uses of hydrogen. What decisively drives the current interest into hydrogen is innovation and technological leadership on the one hand, which China can achieve through industrial clusters and economies of scale, and energy security on the other: reducing dependence on imported oil and gas, with rising importance of air pollution control- and decarbonization-related considerations. It remains to be seen whether China can avoid the shortcomings of its electric vehicles (EV) supporting policies as it aims to boost a hydrogen economy with Chinese characteristics.

A simplified SWOT analysis presented in the report identifies the most important strength, weakness, opportunity and threat for hydrogen economy development in China:

In order to move the hydrogen economy agenda forward, a preliminary “to do list” for Chinese decision-makers in this field would include: