For the second consecutive year, the coal sector registered good results in 2018. Global coal demand continues to increase (+0.7% in 2018), reversing the trend observed in 2015-16. Coal accounted for 26% of global primary energy consumption, maintaining its position as the second-largest energy source after crude oil, and the first for electricity generation with 38% of global power generation. 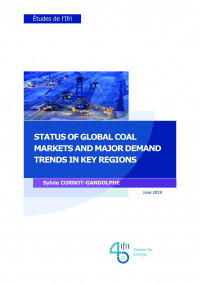 In the six major producing countries (China, India, the United States (US), Indonesia, Australia and Russia, which together account for 83% of global production), coal production registered strong growth, except in the US where production fell. International steam coal trade picked up, driven by continued rise in Chinese imports and, for the first time since 2014, a sharp increase in India’s steam coal imports. Steam coal prices reached levels not seen since 2011, then collapsed in January 2019, with different implications on coal and gas competition depending on regional pricing of gas (spot or oil-indexed) and the existence of carbon policies.

The world still offers a contrasted picture. The increase in coal demand in 2018 was again driven by stronger coal-fired electricity generation in Asia, mainly in China, India and Southeast Asia, while coal demand declined in North America and Europe. Coal demand increased slightly in China, but the share of coal in the energy mix continued its decline (59% in 2018 compared to 71% in 2011), due to the fight against air pollution. India's consumption increased by around 8% in 2018, mainly driven by demand from the electricity sector, but coal use by steel, aluminium and cement producers also rose. In Southeast Asia, coal imports and demand grew strongly driven by the increase in electricity demand and the reliance on coal for power generation. The MENA region is building new coal plants to diversify its electricity mix. Of note was the commissioning of a large ultra-supercritical coal power plant in Morocco and plans in Egypt to develop nearly 10 GW of coal capacity by 2025 despite a strong potential for gas and renewables.

Conversely, despite President Trump's efforts to promote coal, US coal demand continued its fall. Power utilities are more and more turning to natural gas and renewables. Since 2015, about 40 gigawatts (GW) of coal-fired power capacity have been retired, of which 13 GW in 2018, twice as much as in 2017. In the European Union (EU), coal demand continued its long structural decline due to reduced demand by power utilities. In 2018, electricity production from renewable energy sources (RES) accounted for 32.3% of EU electricity generation, against 19.2% for coal (including lignite). Coal demand was stable in the traditional coal importers in the Pacific Basin (Japan, South Korea and Taiwan).

Overall, coal is still strong but its expansion is expected to stop. Accounted for 30% of global CO2 emissions, coal in the power sector is the principal focus of climate-related policies. Following the 2015 Paris Agreement, several governments and power utilities have decided to phase out coal from their electricity mixes and joined the “Powering Past Coal Alliance”. Coal reduction or phase-out policies are being adopted or considered by more and more countries (e.g. Germany). The global coal fleet is still expanding (2 GW at the beginning of 2019) but net capacity additions were only 19 GW in 2018, far behind the 171 GW of renewable capacity added that year. With declining deployment and high levels of retirement, the global coal fleet could start declining by 2022. In countries where coal generation is still part of the electricity mix, carbon capture and storage (CCS) will be vital to reduce emissions of coal power plants but its large scale adoption on coal power plants is far from certain.

Mitigating Geopolitical Risk – Japan as a Stabilizer in...
END_OF_DOCUMENT_TOKEN_TO_BE_REPLACED
Has the European Union risen up to the challenges of geopolitics? Europe after the Czech...