Strategic Dimensions of the Energy Transition: Challenges and Responses for France, Germany and the European Union Etudes de l'Ifri, April 2019

The low-carbon energy transition in France, the European Union (EU) and the world is today taking place unevenly and too slowly to preserve the climate and biodiversity. CO2 emissions are continuing to rise, while governments’ commitments are insufficient: in the long-term, the world is set to see temperatures increase by +3°C. Efforts to fund adaptation measures still need to be strengthened considerably. 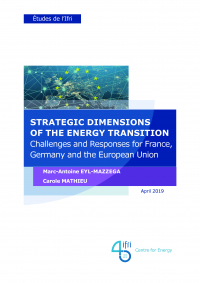 Strategic Dimensions of the Energy Transition: Challenges and Responses for France, Germany and the European Union Download
2.03 Mo

The geopolitical and geo-economic issues related to energy and climate policies are becoming more complex. They are expanding and reinforcing themselves. New rivalries are emerging on top of issues related to supply security in fossil fuels which remain acute (Ukraine-Russia, Iran-Saudi Arabia, maritime straits and terrorism). They follow from new risks and even threats that are geopolitical and geo-economic, linked to the energy transition. These include: critical metals, technologies, innovation and value chains, market access and the control of strategic assets, the establishment and spread of standards, which can be instrumentalized to shape the dominant technological choices and serve industrial interests.

China and the United States (US) have taken a certain lead. For China, this has mainly resulted from strong state action through state-owned enterprises and integrated value chains, large investment capacity and an unmatched appetite for risk. For its part, the US lead stems from policies directly and indirectly supporting domestic actors and an innovation ecosystem which is historically highly developed and effective. American and Chinese companies are also buying up low-carbon technology assets in Europe. The EU has scientific and industrial strengths, but public policies have favoured the breaking up of industrial entities to foster competition and open markets in order to lower prices for consumers, sometimes at the cost of technological leadership objectives.

France and the EU do not master the extraction and enrichment of most critical metals. Photovoltaic cells are Chinese, even if more than half of the value chain is European and local. Neither France nor the EU have technological advantages in onshore wind power, nor in 3rd generation battery cells, of which 50% are Chinese. By contrast, France and the EU have an advantage in solar panel inverters, in floating or fixed offshore wind turbines as well as potential in 4th generation solid batteries or flow batteries. They also have the capacity to make breakthroughs in new generations of photovoltaic cells, as well as in recycling. Finally, the EU has solid capacities in nuclear power, energy efficiency, hydrogen, while also having an important car industry which is progressively shifting to electrification. The EU also has cyber capacities. The bloc should draw on these advantages to build strategic industrial sectors, create jobs and value added in Europe, and to avoid technological dependence.

At the European level, the energy transition is about to reach a milestone. The EU is on track to meet the 20-20-20 objectives (although emissions are likely to be above targets in Germany for sectors not covered by the carbon market, and despite the recent slowdown in energy efficiency efforts). In 2018, tougher targets have agreed for 2030 and discussions have opened on objectives and strategies for 2050. To be on a pathway consistent with the +2°C temperature limit, and ideally with the +1.5°C limit, Europe’s efforts need to be accelerated and deepened in order to complete a new, more difficult and complex phase.  Systematic transformations in governance and public policies, company strategies and citizens’ behavior are required. These transformations need to be grounded in the broadest consensus possible. Indeed, European policies concerning energy and climate change were established in a context and with objectives that do not correspond to deep decarbonization and were largely focusing on market integration and supply security. The challenge now is to adapt them to this profound transformation.

France and the EU are on the threshold of an unprecedented phase in decarbonization. It will involve strategic thinking, veracity and responsibility for objectives, technological choices, costs and technical constraints, opportunities and decarbonization pathways because major, complex decisions about the future need to be made. Although France and Germany have fundamental differences over nuclear power, they have a key role to play in pushing forward global and European governance over energy, and must encourage other willing European partners to join them. The two countries deserve betting on a Franco-German climate union which would take small and big steps in terms of bilateral cooperation, within the EU and at the global scale.

On the eve of the next European elections, a new energy transition pact could be established on the basis of the following recommendations:

In addition to this overhaul of Europe’s domestic agenda, the EU must adjust its diplomatic strategy and strengthen global leadership to fight climate change. This involves investing in bi-lateral cooperation (EU-China, EU-India, etc.), to link free-trade agreements with ambitious climate commitments, or, failing this, to evaluate the relevance of a carbon tax on the EU’s borders. The Union should also draw on global governance bodies such as the G7 and the G20 to increase efforts for controlling energy consumption and obtain an end to investment in traditional coal-fired power stations. New alliances must be constructed to favour the sustainable transformation of cities and a scaling up in the electrification process, especially in sub-Saharan Africa. Lastly, the EU’s decarbonization strategy should include specific measures to accompany efforts made by neighbouring countries (in the Eastern Europe and the South of the Mediterranean) to avoid the creation of a new climate wall on Europe’s borders.

The Political Economy of the Metaverse
END_OF_DOCUMENT_TOKEN_TO_BE_REPLACED
Critical minerals: How to secure stable and resilient supply chains? Views from Europe...