What Is a Think Tank? A French Perspective Etudes de l'Ifri, November 2019

The French Institute of International Relations (Ifri) celebrated its 40th anniversary in the spring of 2019, in a completely different environment to when it was founded, which was dominated by the competition between the two “superpowers” of the time, the United States and the Soviet Union (USSR). 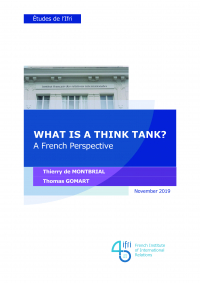 It is expected that the world in the coming decades will mainly be marked by competition between the United States, which does not intend to give up its primacy, and China, which openly asserts its ambition to surpass the United States before the middle of the 21st century. While the USSR was unable to adapt to the technological revolution, China excels in this and seems to be on track to soon gain access to all the attributes of what is meant by a superpower.

The international system is evolving towards a new configuration that however it would be wrong to describe as bipolar, like the Cold War era, because of its extreme complexity as demonstrated, for example, by the difficult concept of cyberpower. The risk of the nuclear apocalypse, which mainly occupied the best strategists in the second half of the 20th century, has been supplanted by a wide variety of more diverse and diffuse risks, for some large-scale, in the political as in the economic order. In some respects, the situation is rather reminiscent of the aftermath of the First World War, when Chatham House and the Council on Foreign Relations were founded, two major institutions which served as models for us in 1979 and will soon celebrate their centenaries.

For a century, and especially since the Second World War, the landscape of what are now called think tanks has significantly changed and expanded. Clearly, the naive hopes of an international system subject to the law and methods of peaceful conflict resolution with the help of facilitating institutions have been disappointed. Furthermore, the academic world has gradually taken over at least part of the analysis and forecasting activity, which was initially the first distinctive feature of think tanks and the media does not lack talented journalists who also work in the same field. In addition, some think tanks are politically partisan and others not, some advocate for the public interest and others rather belong to lobbies or to communication companies, etc. Furthermore, the positioning of think tanks is not the same in liberal democracies or in authoritarian countries.

Insofar as think tanks in the world form a community committed to promoting a sustainable new world order in the long term, which remains to be ascertained, we can at least assert that their task is significantly more difficult than that of their founding fathers, at least as they conceived it. This is why, on the occasion of its 40th anniversary, Ifri is proposing to its peers to devote some joint effort on reflecting on the relevance of our profession, which firstly begins with identifying it correctly and specifying our working methods. The four papers in this issue are only an initial contribution in this respect.