Will the EU Let Itself Be Bought ? New Framework for Foreign Direct Investments in Europe Etudes de l'Ifri, March 2019

In 2016, Chinese foreign direct investment (FDI) inflows into the European Union (UE) reached a record high, in contrast to the steady decline in FDI flows from the EU to China. Beijing is looking for markets and strategic assets and particularly targets advanced technologies in major European economies, deploying an aggressive and sometimes opaque strategy. 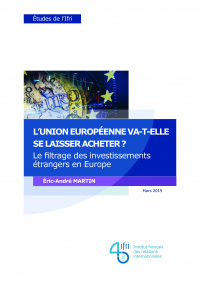 The importance of certain acquisition operations, due to financial volumes or related industrial policy issues, has sparked debates in Europe with regard to the economic security concerns they reveal and the preservation of rules of fair competition for European companies operating in China. Numerous well-documented studies, have detailed the various risks that this situation represents over time for the industrial base and the competitiveness of the EU.

Several member states (MS), including France and Germany, have tightened their national legislation and called for stronger European rules. The regulation on FDI screening is thus part of the European response. It aims at unifying the applicable framework within the EU by defining common principles and establishing a cooperation mechanism involving the Commission and the MS to exchange information on FDI projects falling within their jurisdiction.

The main conclusion of this study is to argue that the adoption of this regulation is not the point of arrival but rather the starting point of a process of awareness and collective adaptation to major issues regarding the prosperity and competitiveness of the European Union.

The first is to continue to provide an attractive framework for foreign investment, which the EU is dependent on, based on clear and commonly accepted rules, while learning to identify problematic FDI projects, regardless of origin. The EU must also refrain from using the screening mechanism to force concessions from China on reciprocity.

The second would be the necessary adaptation of the European approach, always marked both by the divisions between Member States on how to consider certain FDI, but also by a market regulation approach. The definition and update by the EU and its Member States of the list of technologies and assets they consider as strategic would be a necessary step. Considering the interlocking levels of overlap, the emergence of a culture of economic intelligence and a geoeconomic approach to these issues seems necessary.

Thirdly, the issue of FDI screening cannot be addressed independently of China’s systemic challenge for the EU. This requires considering how Beijing deploys its influence in Europe and identifying the risks associated with it on the one hand, but also the need for European companies to obtain better access to the Chinese market on the other hand by pressing for a bilateral investment agreement. In doing so, the EU must seek allies to consolidate an international order based on rules accepted by all.

Finally, the question refers to the way in which the EU must think and ensure the preservation of its competitiveness, the securing of value chains, but also of its technological and industrial capital in a context of accelerating technological changes and hardening of the economic competition, in order to be the first to control them.

Building Bridges over the Blue Pacific. Beyond Marine...
END_OF_DOCUMENT_TOKEN_TO_BE_REPLACED
Asia after the War in Ukraine: Re-imagining multilateralism and the risk of...