India is now a major player in the international fertiliser market, regardless of the nutrients considered. Whether it is a question of imports, domestic production, or consumption, India ranks among the top three global players in the sector. 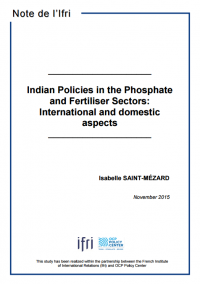 At the same time, an internal analysis of the situation in India shows many constraints. Some constraints are structural, including the scarcity of raw material resources in the country, while others are strictly political and refer to the difficulties that Indian leaders are experiencing in reforming a politically sensitive sector.

In this respect, Narendra Modi's government may prove as cautious as its predecessors, at least in the short term. Despite his pro-reform image, Narendra Modi has been more guarded than expected on a number of issues. The prospects for reform in the urea sector - the largest and most problematic of fertilizers in India - are therefore proving uncertain. Nevertheless, the Prime Minister's aim of launching a new "Green Revolution" must attract attention, particularly because it underscores the seriousness of excesses related to the overuse of urea and intends to give Indian farmers better ways to use fertilisers in order to maintain the health of their soil.

Due to a lack of decisive reforms, India's production capacities are not progressing as quickly as domestic demand; the country must therefore rely heavily on imports, including for urea, which was once a self-sufficient sector. This dependence on imports is a risk factor insofar as it subjects India to price fluctuations in international commodity markets. In order to avoid these fluctuations, Indian authorities have tried to enter into long-term supply agreements or even to acquire shares in the firms that supply them.

Similarly, authorities have encouraged major players in the sector to form joint ventures abroad. In keeping with this vision, several firms – including the giant IFFCO (Indian Farmers & Fertilizers Cooperation Limited) – have been building a network of joint ventures in North Africa and the Middle East since the early 2000s. In fact, this network enables supplies to be secured at a very early stage of production, since most of the products from these joint ventures are sent to India. This also provides a certain level of protection from the volatility of international markets. Out of the five joint ventures currently in operation, four fall under the phosphate sector and one under the urea sector. However, it is clear that this network of joint ventures is bound to further develop and diversify, as the major Indian manufacturers in the fertiliser sector have grown anxious to secure their supplies of raw materials and intermediate products.