After several decades of reforms, the situation in centralized power sectors has hardly changed. The sub-Saharan power sector remains underdeveloped, and power sectors are experiencing significant financial difficulties that have been further exacerbated first by the effects of the pandemic and then the war in Ukraine. 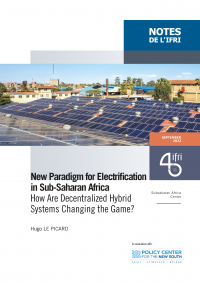 The operating losses of all African power sectors exceeded $150 billion in 2020. In view of the region’s population growth, centralized grids cannot fully meet their electricity needs, even in areas with access.

Consequently, individuals and businesses are motivated to become more independent from the centralized grid to meet their electricity consumption needs. Market mechanisms are at work to fill the gaps created by the weakness of the centralized grid. The market for decentralized systems is experiencing strong growth in the region and has enormous potential in light of the grid's weakness: in addition to 600 million sub-Saharans without access to electricity, there are 500 million with access but who are coping with an unreliable or expensive grid. On a continent-wide basis, this is an opportunity worth more than $350 billion by 2030.

These systems can provide faster access to electricity than the centralized grid for people without access. Similarly, the high modularity of these systems allows consumers with existing access to electricity to climb the energy ladder, enabling them to access new electrical services depending on their budget and needs. The lower cost of decentralized, renewable systems can also reduce the cost of electricity for commercial and industrial consumers, promoting their economic competitiveness and the penetration of renewable technologies across the continent. Decentralized generation capacity can also increase grid resilience, making consumers less dependent on centralized infrastructure. Finally, in the longer term, if electricity is generated primarily where it is consumed, it does not need to transit through transmission lines. It would also prevent electricity losses along transmission lines, that are high in many countries in the region. It would also limit the need for substantial investment in grid infrastructure which is difficult to raise private funds for and for which the International Energy Agency (IEA) estimates an average of $40 billion per year is needed in the coming years.

While the region’s centralized power sectors are experiencing increasing difficulties due to Covid-19 and the war in Ukraine, decentralized systems will be called upon to play a key role in expanding access to electricity on the continent now more than ever. With the availability of capital dwindling in emerging countries, development finance institutions (DFI) could further support investment in the ecosystem of businesses trading in green decentralized solutions to facilitate access to clean electricity on the continent.

Mitigating Geopolitical Risk – Japan as a Stabilizer in...
END_OF_DOCUMENT_TOKEN_TO_BE_REPLACED
Has the European Union risen up to the challenges of geopolitics? Europe after the Czech...