Oil Exploration and Production in Africa since 2014. Evolution of the Key Players and their Strategies Notes de l'Ifri, May 2018

The fall in oil prices, which began in fall 2014, had a significant influence on the strategies of the key players in the oil industry in Africa. 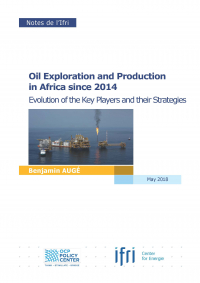 The continent’s oil sector has experienced deep-reaching changes, ranging from a drop in exploration budgets, the disappearance or sale of weakened companies, the reorganization or pullback of the traditional oil majors, the establishment of new companies and the arrival of state-owned companies attracted by the crisis-induced windfall effects.

Yet the crisis has not redefined the geography of African production, whose principal giants are and will continue to be Nigeria, Angola, Algeria and Libya, at least in terms of reserves. Nevertheless, new zones have emerged, in particular due to the risks taken by junior players backed by powerful investment funds that have had faith in the potential of geologists and technical teams formerly employed by the big companies. This is first of all the case in East Africa, for oil, in Uganda and Kenya, along with gas, with Tanzania and Mozambique. Several very significant oil and gas discoveries have been made in a new basin located between Mauritania and Guinea, contributing to its development. However, no single African model has taken shape, as each company has followed its own path in making decisions about acquisition and exploration. Whereas traditional players, such as the Western majors ENI and Total, have continued to invest on this continent that plays a central role in their global production and strategy, some big companies, such as ConocoPhilipps, have quite simply left the field, while others, such as BP and ExxonMobil, have made new high-risk acquisitions.

As for the large Asian state-owned companies, China’s investments in exploration and production have tended to stagnate (concerning CNPC and Sinopec in particular), while others, such as the Indonesian Pertamina or India’s ONGC, have significantly bolstered their presence.

The disengagement of the traditional banks affected by the 2008 financial crisis has led to a dearth of available funds for the oil sector in Africa, a situation exacerbated since 2015 as prices have fallen. So private and state-owned oil companies in Africa have diversified their sources of funding. Like Glencore in Chad, traders have begun making loans to the extractive sector, and Chinese banks are also lending more, including for projects where Chinese players are not involved. The African banks, chiefly Nigerian and South African, are also playing an increasing role.

The crisis has also encouraged more cooperation among different types of oil companies. For example, a junior company such as Tullow Oil has begun to work with a major Western company, Total, and a major Chinese state-owned company, CNOOC, in developing resources it discovered in Uganda. These types of cooperation and risk-sharing increased during the crisis: today fewer licenses and projects are being developed by a single player. Finally, the crisis stimulated the arrival of service companies, which were hard hit by the drop in contracts and the pressure on prices from operators and have invested in production. By taking on the risks themselves, these service companies ensure that their competency and knowledge are utilized and protect their economic model, becoming decision-makers in oil development.

Oil Exploration and Production in Africa since 2014: Evolution of the Key Players and their Strategies
Download
1 Mo
Keywords
Oil Oil prices Africa
ISBN / ISSN:
978-2-36567-873-5
Print this article
Back to top

The Political Economy of the Metaverse
END_OF_DOCUMENT_TOKEN_TO_BE_REPLACED
Critical minerals: How to secure stable and resilient supply chains? Views from Europe...