China’s dominance in the production of rare earth elements symbolizes the competition for once obscure sets of mineral resources in our increasingly digital, low carbon world. 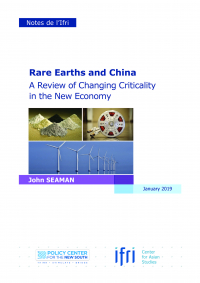 For the last two decades China has produced between 80 and 95 percent of the world’s rare earths – a group of 17 metals that have become key components of revolutionary technological progress in fields ranging from energy, to ICT, to medical devices, to defense. Despite their name, rare earths are not rare, and can be found across the globe. Environmental concerns, which spiked in the 1970s and 80s notably in the United States and Europe, liberalized global trade, and Chinese policies designed to harness the country’s resource wealth are primarily responsible for the concentrated production of these metals.

From 2010, the world was made acutely aware of this distorted division of labor. Running counter to its commitments to global trade rules, China put in place stringent export control measures, including licenses, taxes and quotas, that would severely limit the supply of rare earths to industrial consumers abroad. In the same year, China was also widely accused of, though vehemently denied, placing a de-facto, two-month embargo on rare earth shipments to import-dependent Japan as a means of punishment for the detention of a Chinese fisherman in disputed waters in the East China Sea. The facts of these latter events can be disputed, and the gains that China may have achieved from such an embargo were marginal, but the damage was done. A combination of supply concerns and spiking prices – which for some rare earths rose by 500 percent or more in the year that followed – drove an investment boom in rare earth exploration that would include the jungles of Brazil, the depths of the Pacific Ocean and even the surface of the moon.

Some production outside of China, notably from the Mount Weld mine in Australia, has so far proven viable, but others, such as California’s Mountain Pass mine, have faltered as market conditions have shifted. Following a dispute settlement process at the World Trade Organization, China returned to more or less normal trade practices in 2015 and still accounts for more than 80 percent of global rare earth production today – including nearly all of the world’s output for some critical elements, such as dysprosium.

On the demand side, industrial consumers overseas went into high gear to find solutions. Many have been able to make efficiency gains, find substitute materials, or change technologies altogether that led to an estimated drop in nearly one third of global rare earth demand through 2016. But for others, for instance in the wind and automotive industries, solutions have proven more complicated and rare earths remain critical materials. Many project that demand for rare earths such as neodymium and dysprosium will rise significantly on the back of these dependent industries, but technological change and efficiency gains may yet hold further surprises. Herein, the risks are twofold. First is the continued dependence on China for rare earths that are still considered critical inputs by many industries of the future. Second is the risk that, in the frenzied search for solutions to supply constraints, industrial users may have to sacrifice competitiveness relative to other, particularly Chinese users which don’t face the same material constraints.

For China, using its resource advantage as an economic “weapon” to fight its diplomatic battles is far from the primary goal. Indeed, China’s approach to the rare earth industry has been largely driven by more domestic concerns. One is responding to the country’s growing environmental crisis. In this effort, Beijing increasingly favors the more energy-efficient and low-carbon technologies such as wind energy and electric vehicles that often rely on rare earths. At the same time, it also looks to better manage the environmental disaster that rare earth production has brought to the country’s mining regions. Another core driver is facilitating China’s economic strategy to lead the industries of the future and increasingly master respective value chains – ensuring the country’s long-term economic transformation and providing further legitimacy to the ruling Party. In this light, China’s approach to rare earths has not only been to master resource production and ensure that Chinese industries have the resources they need, but also to increasingly dominate the downstream, value-added industries that depend on these critical metals. As such, China today is not only the world’s primary producer of rare earth oxides, it is also their largest consumer and increasingly controls value chains for key dependent products such as rare earth magnets.

Still, China’s resources are not infinite, and concerns over rising demand and increasingly limited reserves for some rare earths in China are pushing Chinese companies to seek out resource supplies from abroad. As such, a new wave of overseas Chinese investment may mean that the production (and pollution) that was once delocalized to China will increasingly be diverted to other areas of the globe, with China still looking to master the more valuable downstream industries.

Building Bridges over the Blue Pacific. Beyond Marine...
END_OF_DOCUMENT_TOKEN_TO_BE_REPLACED
Asia after the War in Ukraine: Re-imagining multilateralism and the risk of...