For decades, the large Groningen gas field has been a central pillar of the Dutch welfare state. The availability of gas was so self-evident that many generations still identify with the slogan “Nederland gasland” (“The Netherlands, a gas country”). The nearing end of Dutch gas now requires a mentality shift. 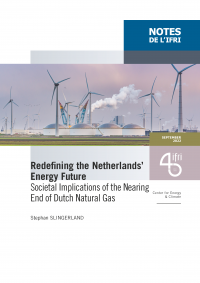 Over the years, the Netherlands have built up a gas infrastructure that extends to all capillaries of society and that currently still supplies around 44% of total energy demand and 69% of households’ energy use. The large Dutch gas reserves also formed the basis for the development of the European gas market and provided up to 18% of the national state’s income (in 1985).

The management of domestic gas reserves have always been at the heart of the Netherlands’ energy policies. After the discovery of smaller offshore gas fields in the Dutch part of the North Sea in the 1970s, it was decided to spare the Groningen field as a stabilizer of the gas market as much as possible. Later, with an anticipated depletion of the Groningen field around 2030, the plan was to develop the Netherlands into a European gas hub and roundabout by building large gas storage and liquified natural gas (LNG) capacities, as well as expanding interconnectors to all surrounding countries.

However, the nearing depletion of the Groningen field caused small earthquakes of increasing frequency and magnitude, which led to public protests against Dutch energy and gas policies. They intensified after an earthquake with a magnitude of 3.6 on the Richter scale hit the village of Huizinge and caused substantial damage in a large part of the Groningen province. This was also expressed by a groundbreaking juridical verdict in which the Non-Governmental Organization (NGO) Urgenda sued the Dutch state for not meeting its climate targets, and by other environmental juridical verdicts that followed. Consequently, plans for the ‘Dutch gas roundabout’ had to be revised and it was decided that the Groningen field should be closed as early as 2023.

At the same time, Dutch populist parties vehemently opposed to stricter climate policies gained substantial support. So far, no clear solution has been found to ease these increasing societal tensions around energy and other transition policies. The new government that took office in January 2022 announced ambitious but also partly controversial climate goals, including the planned construction of two new nuclear power plants and a renewed focus on exploitation of the remaining offshore gas reserves. The Russian invasion of Ukraine led to an acceleration of these plans, including also new measures such as rapidly expanding LNG capacity, intensifying offshore gas exploitation efforts and boosting production from the Dutch coal power plants.

While Russia’s invasion of Ukraine fueled the Dutch tensions around gas dependance and the energy transition, it is rather the deeper underlying trends that need to be addressed for a successful energy transition in the Netherlands. First, the mentality shift in society from gas pride to ‘energy transition pride’ still needs to be completed. Second, a solution needs to be found to bridge the increasing societal divide between transition supporters and opponents. That needs to be done by providing a credible narrative and concrete benefits to all–including the opponents of transition–, while also anticipating the geo-economic upheavals of this transition. And third, it needs to be prevented that rapid but consequential energy decisions taken now such as once more intensifying the exploitation of domestic offshore gas – strengthen the existing natural gas ‘lock-in’ and continue to fuel controversy within society about which roads should be taken to achieve the energy transition.

Mitigating Geopolitical Risk – Japan as a Stabilizer in...
END_OF_DOCUMENT_TOKEN_TO_BE_REPLACED
Has the European Union risen up to the challenges of geopolitics? Europe after the Czech...