A Review of Recent Trends in China’s Gas Sector and a Glimpse into the 14th Five-Year Plan Notes de l'Ifri, November 2020

China’s economy has rebounded since April 2020 and China is one of the few countries in the world that is expected to avoid a recession in 2020. With low imported gas prices, progress with the gas market liberalization and success in pushing up shale gas production, the window of a golden age for gas has opened up again in China. 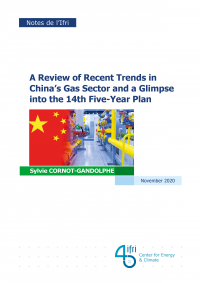 The Chinese gas market is moving against the global trend. Natural gas demand has continued to rise, albeit at a slower pace. It is expected to grow by 4% in 2020 and reach 320 billion cubic meters (bcm), boosted by city gas mainly. Gas production has continued its significant growth and is likely to reach close to 190 bcm in 2020, driven by a surge in shale gas production. More domestic output means less room in China’s gas supply mix for imports which have slowed down – with negative consequences for its central Asian pipeline suppliers at the high end of the supply cost. Boosted by low liquefied natural gas (LNG) prices, LNG imports have remained strong. China’s dependence on imported gas has declined for the first time in 2019 and has continued its contraction in 2020. Investment in key infrastructure such as pipelines and gas storage has been accelerated.

Major gas reforms have come thick and fast over the past 12 months across the full gas value chain. A crucial landmark was the establishment of China Oil & Gas Pipeline Network Corporation (PipeChina) in December 2019. The new national pipeline company will be responsible for the development and management of transportation of gas, crude oil, refined products plus re-gasification and underground gas storage. PipeChina will consolidate a large part of midstream assets held by the three national oil companies (NOCs), whose have started to swap some assets. It will operate the infrastructure assets as an independent business and will provide efficient third-party access, facilitating market access to suppliers and end consumers.

Upstream, in an effort to encourage investment into exploration and production (E&P), foreign companies have been allowed to explore and develop oil and gas resources since July 2019 without having to partner with one of the NOCs. China will also open up more acreage through competitive bidding and tenders.

Downstream, restrictions on foreign investment have been further relaxed and gas market pricing has continued to move towards greater marketization. In March 2020, the government has introduced the possibility to move from benchmark city-gas pricing to market pricing, starting with provinces where there is enough competition on the supply side (typically coastal regions with multiple LNG receiving terminals).

The picture that emerges from these reforms is an industry structure in which almost all midstream infrastructure remains under government control, while the upstream and downstream sectors are increasingly exposed to competition—a whole new commercial dynamic in Chinese gas.

During the 13th Five-Year Plan (FYP) period (2016-2020), the main pillars of the reform of the gas system have been designed. The 14th FYP will focus on the implementation of the new policies. More supporting measures, implementation rules and market supervision will be introduced to enforce the new reforms. The gas industry will have to adapt to the new rules. Market players will have to adjust their business strategies. Already, competition is developing in the retail market and downstream consolidation and integration is under way.

The growth of domestic gas production and the availability and the benefit of low gas prices in the post-pandemic period augur well for future gas demand, which is expected to increase by 7% to 9% annually to reach 450 bcm to 500 bcm by 2025. Policies focused on clean air will provide growth opportunities for the gas industry in this decade. Likewise, natural gas, which is cleaner than coal, will help China to control carbon emissions.

Growing trade and political tensions as well as the COVID-19 pandemic have elevated national energy security to a new level of concern, which make safeguarding energy security and improving energy self-sufficiency top priorities. With heightened concerns on national security and supportive upstream policies, the outlook for Chinese gas production in the 14th FYP looks upbeat. Domestic natural gas production is expected to reach 260 bcm by 2025, driven by shale gas.

Despite the strong increase in domestic gas production, gas imports will increase to fulfill the rising supply/demand gap during the 14th FYP period. In addition to the ramp up of pipeline gas deliveries from Russia – which started at the end of 2019 – LNG imports will continue to expand. China is expected to become the leading LNG importer in 2023.

The German Healthcare System in the face of the Coronavirus...

French public opinion on China in the age of COVID-19:...

Joe Biden's America: the Calm after the Storm? Annual Conference on the United...

In the aftermath of the November elections, Ifri's Program on North America is holding the...