Surprising coal markets: while the world coal demand is diminishing, the steam coal price doubled in 2016. After five years of uninterrupted price decline and a sluggish world demand, this strong price hike might appear as paradoxical. This paper explains the principal reasons for this situation. 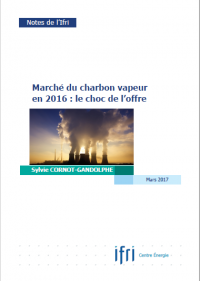 After five consecutive years of decline, international steam coal prices doubled in 2016. The main reason is not an increase in global coal consumption, which has been declining since 2014, including in 2016, but the tightening of supplies in the narrow international coal market. Policy changes in China have played a key role. To limit production overcapacity and halt the decline in domestic coal prices, the Chinese government has mandated a reduction in the number of working days in Chinese mines from 330 to 276. This decision has led to a fall in domestic production. Faced with rising coal demand in summer 2016, and surging domestic coal prices from end of June, China once again turned to the international market to cover its supply needs. It thus became again the world's largest coal importer, outpacing India. The increase in Chinese imports did not prevent Chinese demand from falling for the third consecutive year.

On the supply side, after five years of declining prices, the export capacities of the main coal supplying countries have been reduced by mine closures, corporate bankruptcies and investment reductions in the sector. This led to the scissor effect observed in 2016, characterized by a sudden and unexpected increase in Chinese imports combined with a supply squeeze.

Coal prices surged in the third quarter of 2016, before starting to decline. They have stabilized since December 2016, albeit at high levels. The decline could continue after winter 2016-17. The Chinese government intends to control the level of domestic coal prices to limit their impact on electricity prices and inflation. It has, therefore, relaxed its control on coal production, which has had the effect of lowering Chinese and international coal prices. However, many uncertainties persist in the short term. Given China's weight on the international coal market and the difficulty in driving the structural reform of the domestic coal supply, one can expect highly volatile international coal prices, which, more than ever, will be determined by Chinese policy.

Norway as a Decarbonization Hub for the European Union
END_OF_DOCUMENT_TOKEN_TO_BE_REPLACED
The EU Strategy for Energy System Integration: what next? Ifri Green Deal Virtual Lunch...

Faced with an unprecedented environmental, sanitary and economic crisis, the European Union is...