Asia is now a nerve center for global economic activity and a theatre of some of the most pressing security concerns of our time. So important has Asia become to global affairs today, and ostensibly for the decades to come, that many have already dubbed the 21st Century as the “Asian Century”. 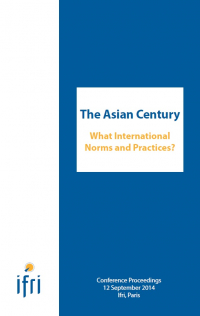 Yet Asia today is increasingly divided among itself. As the geopolitics of Asia is transformed by the emergence of heavyweights such as China and India, what will be the legacy of the “Asian Century” on the creation of international norms and practices in the years and decades to come? Will norms that have emerged through trial and tribulation over the course of the last century or more be upended by new realities and power politics, or will the existing modus operandi of international relations be expounded and improved upon for the benefit of generations to come?

This is the central question that guided a one-day workshop held at the French Institute of International Relations (Ifri) in Paris on 12 September 2014. During this one-day exchange of ideas, some of the world’s preeminent thinkers debated a range of issues facing Asia today regarding security, trade, and the spaces in between. The Ifri Center for Asian Studies is pleased to offer you in this volume the reflections that our guests so generously prepared for these discussions. Far from being exhaustive, we hope this debate is part of an ongoing discussion to be held at Ifri, elsewhere in Europe, in Asia and across the globe on the consequences of a transforming Asia on international norms and practices.

Opening analysis: The Role of Diplomacy in Promoting Norms in the Asia-Pacific
H.E. Christian Lechervy

Asian Approaches to the Law of the Sea: With special reference to the territorial disputes in the South China Sea
Masahiro Miyoshi

Committed to the Law of the Sea: In most ways, except for one
Commander Jonathan G. Odom

Revisiting the Asian Values Debate in the mid-2010s: Competing identities and the case for cooperation or conflict
Gilbert Rozman

Racing for Arms in Asia: Implications for the balance of powers and norms
Masashi Nishihara

Nuclear Norms and Practices in the Asia-Pacific Region
Bruno Tertrais

How are Asian Powers going to Reshape International Norms and Practices?

TPP versus RCEP: What future norms for free trade in the Asia Pacific?
Yorizumi Watanabe

The Geopolitics of Energy in the Asian Century: Enhancing cooperation with non-member Asian countries
Keisuke Sadamori

China's Ambitions in Space: The Sky's the Limit
END_OF_DOCUMENT_TOKEN_TO_BE_REPLACED
The Arctic: Seizing Opportunities and Safeguarding Stability...