The EU gas policy has to deal with a new landscape on the supply and demand sides. This study examines five major recent evolutions of the EU gas market: the relations with Russia, LNG coming back to Europe, the decrease of Groningen production, the contrasted evolutions of shale gas and the perspectives of EU natural gas demand. 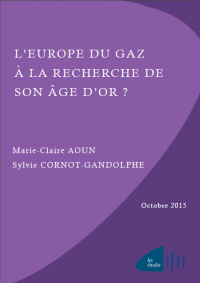 The European energy market has to face numerous challenges to achieve a successful energy transition, preserve its competitiveness and ensure its security of supply. While the EU Communication on Energy Union published in February 2015 has today given new impetus to Europe’s gas policy, this policy has to deal with a new environment both in terms of supply and demand.

On the supply side, the new strategy must henceforth deal with complex relations with Russia. Tensions between Russia and Ukraine along with economic sanctions against Russia have led Gazprom – the EU’s leading supplier – to review its strategy towards Europe. While the “Power of Siberia” project is already underway, Russia’s own pivot towards Asia as announced by Vladimir Putin is turning out to be more difficult than expected: China and Russia have still not been able to find an agreement on the Western route. For some time, Gazprom seemed to want to cut its involvement in European gas assets significantly, due to problems with market liberalization rules. Today, Moscow is sending mixed messages to Europe, first by announcing the Turkish Stream project to deliver gas to Europe’s gates, and then by extending the Nord Stream pipeline. The renewed interest in the EU market by Gazprom is indicative of the importance of this market, which provides the Russian company with the bulk of its gas revenues.

Europe also has to deal with faster than expected declines in its own output. The Groningen field in the Netherlands, the EU’s main gas producer, has suffered major restrictions since January 2014, due to significant earthquake risks. The Dutch government has to ensure the safety of the inhabitants of the region, secure gas supplies and respect contractual obligations to its European clients. The annual production ceiling for 2015 is enough to satisfy Dutch and European needs, by drawing more on stocks and imports. However, strong uncertainties remain on future output, clouding the visibility concerning short- to medium-term supplies of European gas.

Exploiting potential shale gas resources would allow the decline in domestic output to be offset. But the commercialization of shale gas in Europe is still far off, with disappointing results in Poland and Denmark. The United Kingdom is accelerating the use of its resources, but other countries are not moving forward on the whole. There are still many challenges to be met, and an American-style revolution is unlikely to occur. But European shale gas could well improve the security of gas supplies. However, the social acceptability of shale projects continues to be a prerequisite for any development of these resources.

The fall in oil prices is a further distinctive factor to have occurred since 2014, impacting the gas market considerably, especially for liquefied natural gas (LNG). Lower oil prices are affecting gas and LNG prices, and are altering the competition between Asian and European buyers. Along with the slowdown in Asian demand, the fall in prices on international markets has ended the price arbitrage in favor of Asia, which was predominant from 2011 until now. The European market has once again become attractive for LNG. LNG has many advantages and is well placed to meet supply diversification problems, provided that Europe can position itself as a global actor on the international market, and that the European market remains attractive for LNG exporters. This is all the more the case given that lower oil prices risk postponing, or even cancelling, investments in new LNG export projects. Though the market today is characterized by surpluses, this trend could change by the end of the decade.

Western immigration countries are suffused by anti-immigrant discourses based on nativist and...

Faced with an unprecedented environmental, sanitary and economic crisis, the European Union is...