The Mediterranean region has been identified as one of the most affected regions by climate change endangering human security at the food-water-energy nexus. 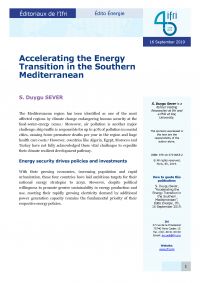 Accelerating the Energy Transition in the Southern Mediterranean Download
0.88 Mo

Moreover, air pollution is another major challenge: ship traffic is responsible for up to 40% of pollution in coastal cities, causing 6000 premature deaths per year in the region and huge health care costs. However, countries like Algeria, Egypt, Morocco and Turkey have not fully acknowledged these vital challenges to expedite their climate resilient development pathway.

With their growing economies, increasing population and rapid urbanization, these four countries have laid ambitious targets for their national energy strategies to 2030. However, despite political willingness to promote greater sustainability in energy production and use, meeting their rapidly growing electricity demand by additional power generation capacity remains the fundamental priority of their respective energy policies.

All four countries suffer from high dependence on fossil fuels in their unique ways. Turkey and Morocco, as energy importers, remain vulnerable to their external suppliers and to price shocks. Egypt and Algeria, as oil and gas exporters, have been facing growing domestic demand, challenges to maintain exports and are highly dependent on export revenues and thus exposed to international price fluctuations. Yet all share common features: the low level of renewable energy sources (RES) in their energy mix (with Turkey relatively in the lead) and fossil fuel subsidies, which are a burden for the budget (total subsidy as share of gross domestic product (GDP) is 9.5% for Algeria and 11% for Egypt). These are key obstacles to energy efficiency investments as well as for the diversification of the energy and electricity mixes.

Despite their ongoing world class projects, such as Benban in Egypt (between 1.6 and 2.0 GW of solar power when completed) or the Noor solar power complex in Morocco (0.58 GW), they are only partially on track to achieve their strong ambitions by 2030. Subsidies for fossil fuels impede the growth of RES in the region. Still, Morocco removed subsidies on petroleum products in 2015 and Egypt is about to completely remove subsidies as part of its economic reforms within the USD12 billion Stand-By Agreement with the International Monetary Fund. When there is strong political will, economic development, transparency and improvement of services, consumers can adapt, especially if energy efficiency measures offset impacts on bills.

Availability of funding and credible regulations for low carbon energy projects are also important factors, especially given turbulent economic circumstances, like in Egypt or Turkey. The investment environment (both politically and legally) with reliable support mechanisms and well-functioning licensing procedures remain critical. In that respect, with the exception of Algeria, the cooperation of all three countries with the European Bank for Reconstruction and Development (EBRD) is instrumental. While reducing their dependence on oil or gas, these countries face a new risk stemming from the dependency on imported renewable technologies. Developing local manufacturing and expertise is a condition for success, yet at the same time, this must be carefully balanced so as not to create higher costs and obstacles to development, by clearly identifying where a country can have the best competitive advantage and how to foster it with R&D activities. Morocco, as an example, has already achieved a local content rate of about 32% at the Noor I solar plant and targets to raise this amount to 35-40% in Noor 2 and 3, not least thanks to well-funded institutions such as IRESEN and Masen and coordinated research programs. Moreover, developing only wind and solar would be missing the full potential. Alternatives such as geothermal also offer opportunities for diversification. In 2016 for example, Turkey ranked 2nd after China, in direct use of geothermal heat and accounted for half of the new global capacity additions. Turkey’s geothermal capacity is projected to increase 144% by 2025. Algeria also aims to increase its currently limited geothermal capacity to 15 megawatts (MW) by 2030.

There is also a clear interest for nuclear energy. Turkey targets 2023 for the operation of Akkuyu Nuclear Power Plant, built by Rosatom (4800 MW, Build-Own-Operate system). Egypt has also decided to develop its first El Dabaa NPP (4800 MW): Rosatom is not only building and planning to operate the plant but also providing a loan to finance 85% of the project expected to be concluded in 2026. Moreover, countries suffering from water shortages display a strong interest in cogeneration of electricity and potable water through small sized nuclear reactors. Algeria works closely with the International Atomic Energy Agency for the optimization of nuclear desalination systems at the Skikda site. Nevertheless, with its high capital investment and need for well-established governance and safety mechanisms, nuclear cannot be rapidly developed and there can be many delays and social acceptance issues.

Starting to decarbonize the transport sector is another avenue for policy action. Some progress is underway: in 2018, Turkey became one of the first six countries where Shell opened a liquefied natural gas (LNG) truck re-fueling station. LNG could be a cleaner fuel for the maritime sector as part of the urgently needed Emissions Control Area in the Mediterranean Sea, which would be a powerful tool to accelerate the fight against air pollution. Developing sustainable public transport systems is also paramount.

One common problem in the region is that energy policies are largely supply side driven, while demand side measures could also offer powerful tools in the transport, housing and industry sectors.

Turkey, Morocco and Egypt’s improving energy intensity signals some progress. However, as long as the efforts for deploying RES are not coupled with more action on energy efficiency, the benefits from RES will be outpaced by rising demand. Efficiency is thus to play a crucial role, notably for reducing peak loads. In Turkey, the implementation of policy efforts can result in at least 20% of energy savings in 2020. As another striking example, replacing 13 million lightbulbs with LED bulbs in 2016, enabled Egypt to save approximately 1.124 billion kiowatt hours (kWh).

As a result of increasing pressure from climate conditions and rapid urbanization, demand for electrical appliances, cooling systems and lighting will be skyrocketing. In Egypt alone, the use of electrical appliances such as air conditioners constitutes 70% of residential and 40% of commercial buildings’ consumption. In this context, district cooling systems offer a considerable potential for energy savings, also enabling the incorporation of local RES and recycled resources in the centralized cooling systems. This further requires enforcement of building codes on the existing and new buildings. Projects such as the “Euro-Mediterranean Smart City Innovation Centers” by the Union for the Mediterranean are crucial venues for knowledge and data exchange regarding the development and implementation of smart and sustainable urban services/solutions. As a promising achievement, Turkey, with its 337 certified projects and 10.9 million certified gross square meters, ranks the 6th among 150 countries, in the 2018 list for “Leadership in Energy and Environmental Design (LEED) outside United States (US)”, a widely recognized green building rating system.

Efficiency also foresees optimization of every possible resource including water management or waste treatment. Morocco’s National Waste Recovery Program aiming to improve collection of household waste to achieve an urban collection rate of 90% by 2020 and 100% by 2030 together with 100% wastewater treatment, is a good example. As of 2015, Morocco has also banned the use of plastic bags.

In this picture, two major challenges emerge for efficiency: the necessity of a substantial shift in the investments from the supply side to the demand side and hence stronger policy attention, but also available funding and economic incentives. This further highlights the importance of longer-term strategies as opposed to short-term energy security concerns. Time is ripe now for these countries to no longer consider adding coal power capacities, but to fully reap the benefits of falling deployment costs of RES and of adopting a comprehensive, longer-term approach that rests equally on supply side and demand side measures with the aim to foster energy security and sustainability of energy systems and urban areas.

The French Military's Perception of the Turkish...

Less than a year after taking office, the Democratic President is not unanimous within his own...

The United States, Europe and the Chinese Challenge. Conference with Henry Kissinger,...
The Transformation of Brazil’s Energy Sector: Opportunities and Challenges...

Brazil has announced at COP 26 its intention to achieve net zero emissions by 2050 and...