Interest in deep seabed mining is growing due to the increasing in global demand for metals and recent technological progress. Critical metals are used in low carbon energy technologies, as well as in the mobility, electronics and the defense industries. Metals become strategic when they are essential to the economy of a state, its defense and energy sector and when their supply presents high risks. Uneven distribution of resources and differences in cost of production have led to a market characterized by oligopolies (China for rare earth elements, or the Democratic Republic of Congo for cobalt). As the remaining onshore resources of critical metals appear complex and costly to exploit, attention has been shifting to deep sea resources. 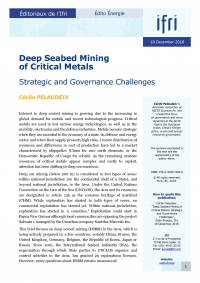 This brief focuses on deep seabed mining (DSBM) in the Area, which is being actively prepared by a few countries, notably China, France, the United Kingdom, Germany, Belgium, the Republic of Korea, Japan or Russia. Since 2001, the International Seabed Authority (ISA), the organization through which State parties to UNCLOS organize and control activities in the Area, has granted 29 explorations licenses. However, many questions about DSBM remain unanswered.

The 2017 European Union (EU) list of critical metals now includes 27 elements. Critical metals are mainly found within three kind of minerals: the polymetallic nodules (PN), polymetallic sulphides (SU) and cobalt-rich ferromanganese crusts (CO). They can be found in all oceans. The deepest (between 3 500 and 6 500 m) are the PN, which in addition to copper, nickel and cobalt, contain more rare metals than earth deposits. SU with economic potential (between 1 500 and 3 500 m) are very rich but distributed unevenly and their inventory along the 60 000 km ocean ridges remain incomplete. CO (from 400 to 4 000 m) are on average three times richer in cobalt than earth deposits, and contain lots of platine as well.

Figure 1 only accounts for DSBM in the Area. It does not reflect the importance that States ascribe to deep sea mining in general. The French Polynesian EEZ for example has a high potential of CO. Except for China, the general objective of industrial policies and research & development is to reduce the dependency to critical metals. Before exploitation starts, many challenges remain to be solved: technical, environmental, economic.

In 2020, China will begin a global deep-sea scientific exploration mission with the Jiaolong, its new manned deep-sea submersible: China is now the fifth country with deep-sea exploration technology, after the United States, France, Russia and Japan. ‘Seabed 2030’ is a collaborative project between the Nippon Foundation and GEBCO which aims to bring together all available bathymetric data to produce the map of the world ocean floor by 2030 and make it available to all.

Technological challenges are due to the depth and remoteness of operations. The excavation techniques are not operational for CO which are hard to cut, but they are available for SU, and progressing well for collecting PN: according to Amundi, the most promising technology developments are to be found in the countries of South Korea, Belgium, China and Singapore.

Environment challenges are particularly concerning. The preservation of the marine environment from the direct impact of extraction (including the water column) presents daunting challenges; extracting metals could impair the important role that the metals have in the biological activity and carbon cycle of the oceans; and restoring the ecosystems appear accordingly very complex, if not impossible.

Important economic challenges are at stake. The economic value of deep-sea metals is subject to the fluctuation of commodity prices. In addition to operational expenditures, very high prefeasibility expenses are to be considered, as well as the cost of site rehabilitation. And there is a critical knowledge gap in terms of understanding the economic services of the deep-sea ecosystems. Expected economic benefits also depend on the value chain that a country has, from extraction to transformation, to the production of semi-finished products, to finished products and to recycling. China stands as an exception as it masters four steps of the value chain whereas many countries only control one or two steps of the value chain (e.g. France, while Germany controls three steps).

Although a few countries are eager to start exploitation soon, the mining code for exploitation is not yet completed. Until then, it is not possible for parties to start mining exploitation in the Area. Governance challenges are manifold and conflicting, such as when prioritizing the environmental and economic security issues which do not have the same importance amongst parties.

The next governance challenge: preparing the mining code

The 168 members of the ISA form an assembly that elects 36 representatives to serve on the Council: countries are distributed in 5 groups, reflecting both geography and interests. The Council approves mining contracts, elects experts in mining, science and law to serve five-year terms on the Legal and Technical Commission (LTC). The 30 members of LTC review mining applications, draft regulations, supervise mining companies and assess the environmental impact of such activities. A Legal Working Group of twelve experts was formed in 2017. Yet, the agreed target date for the completion of the mining code is 2020. Many aspects still need to be worked out.

The concept of CHM, and its principles, are not yet operationalized. The ‘benefit’ of mankind is described in UNCLOS as the “equitable sharing of financial and economic benefits derived from activities in the Area” (art. 140). Yet the ISA has not decided on a finance model for the sharing and use of revenues. The entity which should institutionalize the distribution of benefits has not been established. UNCLOS requires that the Authority and States “cooperate in promoting the transfer of technology and scientific knowledge (art.144). States shall also act “in the interests of maintaining peace and security and promoting international cooperation and mutual understanding” (art. 138). Yet, cooperation between States is limited.

A balance between protection of the environment and resources exploitation requires to elaborate proper environmental impact assessment tools, based on an ecosystem-approach, to consider biological diversity, reduce risks, develop new remote monitoring and assessment tools and technologies, ensure enforcement of regulations, design and management of marine protected areas, and to establish rules for liability for environmental harm. Public participation has to be considered.

Another shortcoming is the special judicial system centered on the Seabed Dispute Chamber which is not as comprehensive and robust as it should be, and should be dealt with by the ISA. Finally, imbalances between rights of ISA members and non-ISA members (e.g. States who have not joined UNCLOS, like the United-States) should still be considered: non-members can become free riders on the convention and could strongly harm the institution since they are free of obligations.

The mining code for exploitation of deep seabed minerals could become another milestone in the governance of the oceans. No rush should thus preside to its drafting. The oceans are already under huge pressure not least from climate change. In accordance with UNCLOS provisions, a balance with disadvantaged States, particularly in the context of globalization, needs to be ensured. It is important that the ISA succeeds in its mandate, so that multilateralism plays its role and delivers large benefits. Moreover, should the DSBM regime become international customary law, it would apply to non UNCLOS parties. In consequence, states should encourage public debates, including on the principles of CHM, the precautionary principle and the polluter pays principle. The EU, as a party to ISA, could clarify its position. The ISA should also consider the institutional changes required by the need to promote interstate cooperation and establish dispute settlement mechanisms.

Mitigating Geopolitical Risk – Japan as a Stabilizer in...
END_OF_DOCUMENT_TOKEN_TO_BE_REPLACED
Has the European Union risen up to the challenges of geopolitics? Europe after the Czech...