Mexico’s Energy Reform (hereafter, the Reform) enacted on December 20th 2013, and the Secondary Laws adopted on August 11th 2014, marked a milestone in the history and the development of the Mexican energy sector.

These major changes were unexpected considering that multiple sectorial reforms pursued since the 1990s had systemically failed to address the structural problems which had been mounting over the years. 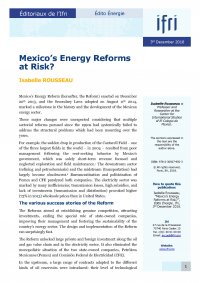 For example, the 2005 drop in production from the Cantarell Field – one of the three largest fields in the world – resulted from poor management and the rent-seeking behavior by Mexico’s government, which was solely focused on short-term revenue and neglected exploration and field maintenance.[i] The downstream sector (refining and petrochemicals) and the midstream (transportation) had largely become obsolescent.[ii] Bureaucratization and politicization were hindering business operation of the two state-owned companies, Petróleos Mexicanos (Pemex) and Comisión Federal de Electricidad (CFE). The electricity sector was affected by many inefficiencies; because of transmission losses, high subsidies, and lack of investments (transmission and distribution), wholesale prices had become much higher than in United States (73% higher in 2013).

The various success stories of the Reform

The Reforms aimed at establishing genuine competition, attracting investments, ending the special role of state-owned companies, improving their management and fostering the sustainability of the country’s energy sector. The design and implementation of the Reform were carried out surprisingly fast.

The Reform unlocked large private and foreign investments along the oil and gas value chain and in the electricity sector. It also ended the monopolistic position of Pemex and CFE.

In the upstream sector, a large range of new contracts were introduced to take account of the specificities of the different kinds of oil reservoirs: their level of technological complexity, risks and costs.[iii] In the midstream and downstream sectors, new permits have been delivered to companies. CENAGAS – a new and independent operator of the gas pipelines – was created and Pemex was turned into a productive state-owned company, endowed with a new supervisory board and a new organizational chart. The National Hydrocarbons Commission (CNH) has been strengthened and the Mexican Petroleum Fund has been created in order to ensure the future economic development of the country. In the electricity sector, the Reform aimed at developing a wholesale electricity market. CENACE became a neutral arbiter to dispatch electricity and CFE has also been turned into a productive state-owned company divided into many generation subsidiaries.

The new framework has opened the door to significant national and international investments, especially in the upstream sector. The licensing rounds run fast: 113 companies have participated in three rounds and farms-outs, 111 blocks have been awarded and operators have committed to drill 138 wells, including 22 in deepwater, totaling $150 billion planned investments. In the midstream segment, the main opportunities lie mainly in modernizing or replacing ageing natural gas pipelines. Although the development of this sector has been slower than the upstream and downstream, the increase in gas demand will be a booster.[iv] Many companies decided to build new pipelines in order to expand the system from 11,300 km to 19,800 km to meet rising demand, representing an unprecedented step.[v] Downstream markets received higher attention over the past years, especially in terms of fuels storage, distribution and retail.[vi] Three tender rounds for wind and solar projects achieved very successful results: 8 billion dollars investments and 9.091 Gigawatt capacity have been committed.[vii] Previously, the 2008 Law for the Development of Renewable Energy and Energy Transition Financing (LAERFTE), and, in 2012, the general Law for Climate Change confirmed Mexico’s intention of increasing the amount of electricity generated from clean energy sources[viii] to 35% by 2024 and 50% by 2050. The Reform (2013-2014) introduced a system of auctions for energy capacity and Clean Energy Certificates (CECs) that offer long-term contracts to foreign and domestic investors. The regulator – Comisión Reguladora de Energía, CRE – has made efforts to improve Mexico’s retail market. Finally, price subsidies have been reduced in many segments of the industry (mainly in natural gas (NG) and electricity) or have been totally cancelled (Liquefied petroleum gas).[ix] In terms of nuclear energy, Laguna Verde is the only nuclear power plant (1,600 Megawatt) in Mexico, operational since 1990.

The collapse of oil prices in 2014 has affected the implementation of Reform, which started that same year. Pemex’s total budget has been heavily cut down (from 304.4 billion pesos in 2016 to 204.6 in 2018), reflecting similar trends in the oil and gas value chain. Moreover, the organizational restructuring of Pemex into a holding with seven subsidiaries, combined with fears of job cuts, provoked uneasy feelings among the employees. The same happened with CFE. In the upstream, it led to an important drop in the Mexican oil and gas reserves and production.[x] In the downstream, Pemex’s refining capacity utilization rate during 2017 was 50.8%, accounting for 892,000 b/d. NG transportation has been a key challenge so that more Liquefied natural gas (LNG) and pipeline gas from the USA had to be increasingly imported, leading to a surge in electricity prices.[xi]

The reform did not provide Pemex and CFE with the necessary financial tools. Pemex could not take advantage of the reserves and prospective resources assigned in Round Zero. A reform to reduce the tax burden for additional Exploration & Production (E&P) projects will be required, alongside income tax incentives. The restructuring of CFE into six generation subsidiaries that should compete among themselves – without regional and/or energy component criteria (coal, fuel or diesel) – weakened the State company. CFE doesn’t have the financial tools to build new transmission lines alone, as mandated by the constitution.

Moreover, it is necessary to enhance the capabilities of local suppliers of Pemex and CFE to support the restructured industry and to professionalize the workforce. As for transparency and accountability, the results are not fully satisfactory and state interventions and bureaucratic procedures slow down approvals and permits; these procedures remain expensive and lengthy. Regulatory bodies are understaffed even if they have been doing commendable work.

In other words, the Reform has transformed the industry but has not fully changed Pemex and CFE. This is one of the pending tasks. Another sensitive issue relates to social licenses and problems with communities. As state-owned monopolies, Pemex and CFE used to give money to the leaders of the communities in return for permits to work there. The opening of the industry to private companies forced the introduction of new rules and procedures to address these problems. Nevertheless, for many reasons, the success of the new rules has been limited and many projects are in a stalemate.[xii] By February 2018, at least 75 projects in the energy sector had experienced serious hurdles. Finally, the authorities have not dedicated sufficient efforts to explaining the purpose of the Reform and sharing its results with the public.

What are the prospects under the new leadership?

The election on July 1st 2018 of a new President, Andrés Manuel López Obrador (AMLO), by a strong majority[xiii] marks a potential turning point given that he has systematically opposed the Reform and led a populist campaign. Besides, the coalition that supported López Obrador’s candidacy got over 40% in both chambers, giving them sufficient power to implement legislative changes – except Constitutional reforms.

This situation is a major source of uncertainty for investors. The ambiguous statements from the President-elect have reinforced the confusion. On the one hand, AMLO stated that he will not cancel the energy reform but, on the other hand, he announced that the regulator will not have more autonomy and will be submitted to the Ministry of Energy’s authority. He also declared that contracts with private investors would be scrutinized to prevent corruption and illegality, while stressing that rule of law will prevail and that there will be no discrimination nor expropriation.

The new President and his coalition – a combination of leftist parties and members of a nationalistic wing opposed to neo liberalism – pursue an objective to foster the country’s energy self-sufficiency. AMLO promised to increase the oil production up to 2.5 million barrels per day (mb/d) in 2024 (from 1.8 mb/d in September 2018), and to reduce the growing gas imports from the United-States.[xiv] In the same way, in order to decrease imports of refined products, he announced the construction of two new refineries, while also pledging to continue the renewable energy programme. With large thermal capacities set to be decommissioned by 2030, gas-fired power plants, renewables and new nuclear are expected play a growing role. Yet, another objective is to strengthen Pemex and CFE, restoring the central role they had in the past. Does this bring back the whole regulation settings in their favor? They also foretold that they will give priority to public investments while private investments are to play a secondary role. Where will the new government find the funds to finance all these new projects? Finally, the appointments of the new CFE and Pemex CEOs signal that politics and patronage have been the main criteria in detriment to past experience and expertise. Nevertheless, it is important to note that the new team will take office in very good conditions since, during five months, it has been briefed twice a week by the officials currently in place about issues related to the sector. The fact that Mexico joined the International Energy Agency, but flirts with the Organization of Petroleum Exporting Countries, is another sign of confusion. Whether the State hits back, or the reforms will continue, is still all up in the air and the oil price level will certainly also be a key factor influencing decisions.

[i]. The progressive depletion of Cantarell (62% of the domestic oil production) did not impact the budget due to the high oil prices. Natural gas production was insufficient: 50% of demand in 2004 had to be imported from the USA to meet the demand for electricity generation.

[ii]. Refineries were failing to meet the annual incremental demand for gasoline and other fuels; Mexico imported about 70% of petrochemical products and fertilizers. And, in the 2010’s, the lack of natural gas pipelines provoked frequent interruptions of industries fueled by natural gas.

[iv]. Until 2016, increasing natural gas demand was related to the growth rate of the industrial and electric sectors.

[v]. Since the Reform, all the companies can transport natural gas; CENAGAS is an operator that organizes capacity tenders.

[vi]. CRE reported that 24 storage terminals permits were awarded to private companies in order to ensure fuel availability for the 45 new retail brands in Mexico (2,908 gasoline stations across the country).

[ix]. The reduction of subsidies didn’t lead to social protests but it encouraged people to vote to Morena.

[xi]. LNG shipment arrives at Dos Bocas (Tabasco) in order to supply the Yucatan peninsula via the Mayacan gas pipeline which is not connected to the national gas system.

[xii]. Some companies have experimented vandalism and blockage and many projects are stopped and under legal procedures.

[xiv]. But they never explained how they will do it.

Kaliningrad in the Post-Crimea Russia. A Bastion or a Weak...

The Future of the Franco-German Tandem

AUKUS, the Indo-Pacific, and France’s Role: Fluctuat Nec...
END_OF_DOCUMENT_TOKEN_TO_BE_REPLACED
The Aftermath of the 2021 German Federal Election - Analysis of the Results and...

On September 26, 2021, German Federal Elections will be held, and mark the end of the Merkel...

How Strong is the Taiwan-US-Japan Triangle?...

The United States is the linchpin of Taiwan’s security. Under Donald Trump’s presidency, as...

Sustainable Urban Growth in Africa: the Role of Governance, SMEs and Disruptive...

In 2030, half of the African population will be living in urban agglomerations. Rapid urban...