Can the Biggest Emitters Set Up a Climate Club? A Review of International Carbon Pricing Debates Études de l'Ifri, June 2021

The world’s largest emitting countries are reconsidering the role of carbon pricing instruments and increasingly looking at carbon border adjustment mechanisms (CBAMs) to address leakage concerns. This renewed momentum should trigger a broader discussion on how to make trade policies compatible with the climate agenda. 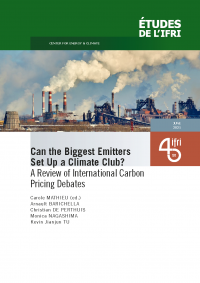 With the Glasgow climate conference (COP26) approaching, the concept of putting a price on carbon is generating unprecedented interest in Canada and the United States (US), China and Japan. But the European Union (EU) still stands as an exception; it is the only regional trading bloc that is determined to leverage the full potential of its emissions trading system (ETS). To date, others have lacked the political backing to deploy nation-wide carbon pricing initiatives with a design sturdy enough to drive meaningful emission reductions.

Canada has made significant progress with the adoption of a national framework for carbon pricing in 2018. The country’s draft regulations foresee the introduction of a federal ETS as of 2022 and a gradual increase in carbon prices, but its ambitions risk being upset by the lack of consistent efforts in the US, its largest trading partner. Given US political divides, a federal carbon pricing scheme is unlikely to materialize in the short run. In China, the long-delayed national ETS has finally been launched. However, its scope is restricted to the power sector for now, and it is likely to only have a modest impact on coal use with its current design. Several arguments may discourage China from fully extending its ETS as planned and rather argue in favor of introducing a complementary carbon tax. Japan has also engaged an expert debate on the benefits of introducing carbon pricing at the national level, but the government is struggling to find a balance between the risk of worsening competitiveness and the need to mobilize investment in clean technologies.

For the EU, the upcoming reform of the EU ETS is an opportunity to introduce a truly demanding cap reduction for the 2023-2030 period and make this flagship instrument more robust, predictable, and fair. To initiate in-depth decarbonization of its industry, the EU will need to phase out free allowances. Therefore, other measures addressing unfair competition will have to be introduced and CBAM could be part of the solution. A unilateral application is however no panacea. The EU should move cautiously and start implementing the CBAM to a small set of sectors. This also means that the challenge of leveling the playing field with non-EU producers will remain largely unresolved.

There is little chance that an international alliance on carbon pricing or “climate club” can be set up within a timeframe compatible with the climate emergency. Yet, the EU’s CBAM proposal can encourage trading partners to accelerate decision-making on carbon pricing, at least to obtain partial exemption. In addition, having a concrete anti-leakage proposal on the table leads to a sense of the inevitable mismatches between the global trade and climate agendas. Large emitters are starting to acknowledge the need for a multilateral discussion on how to decarbonize industries while maintaining a level playing field. The next step should be to kickstart an open discussion in all possible multilateral fora (G20, International Energy Agency, global industry associations, etc.) and mandate the World Trade Organization (WTO) to develop guidance on a wide range of instruments (including CBAM, but also eco-design labelling and standards, differentiated tariffs based on CO2 intensity, etc.) and including a common exemption approach for Least Developed Countries.

Exploring a set of workable solutions should be more attractive to trade partners than pushing for a uniform solution, but results would still take time to materialize. Hence, establishing a level playing field with imports will likely require the EU – and all countries with an aggressive decarbonization agenda for their industries – to strengthen their financial and regulatory support to the deployment of innovative low-carbon manufacturing processes. Again, this almost-unavoidable resort to State aid would strongly benefit from a multilateral discussion.

Building Bridges over the Blue Pacific. Beyond Marine...
END_OF_DOCUMENT_TOKEN_TO_BE_REPLACED
Asia after the War in Ukraine: Re-imagining multilateralism and the risk of...