On 22 June 2018, “OPEC+” oil Ministers (Organisation of Petroleum Exporting Countries members and an ad hoc alliance with several non-OPEC producers, notably with Russia, Kazakhstan and Azerbaijan) will gather in Vienna to discuss the status and future of their production limitation agreement which was initiated in November 2016 and runs until the end of December 2018. 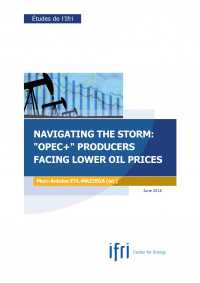 This landmark agreement has been a game changer for oil markets, as Saudi Arabia agreed to cut production (and implicitly exports) and Russia agreed to postpone the increase of its record high and steadily rising liquids output.

This analysis highlights the extent to which ten producers under scrutiny have been economically hit by lower prices and will want to cash in on present price rises, possibly seeking to ramp up production and exports where possible, especially since the fall in Venezuelan output is now larger than the Saudi production cut.

Another challenge is that continuing the current production cuts carries risks as market developments have surpassed these producers’ expectations: oil prices have topped $80 per barrel (bbl), way above what they hoped to achieve, and global stock levels have decreased, as they were planning. With the unforeseen and uncertain developments in Iran and Venezuela, prices may increase to $90/bbl. Russia and Saudi Arabia will be tested as short and long term strategists, based on how they will transform their ad hoc alliance, to make it more operational and consistent with the recent market developments. Such higher prices risk slowing down the global economy and oil demand growth, but also accelerating the growth of non-OPEC supply: the United-States (US) already added 700 thousand (kilo) barrels per day (kb/d) to liquids production in 2017, de facto compensating for Saudi’s supply cut, and is expected to add much more supply in 2018 and to ramp up its exports further. In 2018, the growth in non-OPEC supplies is expected to be higher than the growth in demand, but geopolitical tensions are strong and push prices up.

OPEC’s total liquids output de facto only decreased by around 400 kb/d in 2017 versus 2016, due to the surge in output from Libya and Iraq. This also highlights the extent to which the production levels chosen as the baseline for the cut were high. With the return of US sanctions, Iran’s 2.5 million barrels per day (mb/d) exports could slightly decline but it is expected that China, India, possibly also Russia and others, will find ways to access most of this oil, possibly at some discount, given that there will not be strong discipline to respect unilateral US sanctions. In Venezuela, production has fallen by 700 kb/d to below 1.5 mb/d in the past 18 months and could fall by another 300 kb/d, given the magnitude of its economic and political crisis and the risk of more US sanctions being introduced.

Keeping the current deal unchanged would put OPEC in a more-entrenched defensive position and potentially make it harder to agree and effectively influence oil markets in the future: this would require notably cutting production further (unless Venezuela’s dip continues), loosing revenues and market shares and risking lower compliance from several key members or allies. By contrast, raising OPEC + output in the second part of 2018 could help avoid accelerating the weakening of OPEC’s market position, which should be a serious issue for consideration. It remains to be seen how Saudi Arabia will accommodate these realities with its planned Aramco Initial Public Offering (IPO) for which it needs a high oil price, and with the concerns expressed by President Trump as his voters will face higher gasoline prices this summer ahead of the mid-term elections.

Mitigating Geopolitical Risk – Japan as a Stabilizer in...
END_OF_DOCUMENT_TOKEN_TO_BE_REPLACED
Has the European Union risen up to the challenges of geopolitics? Europe after the Czech...