U.S.-Russian Relations: The Path Ahead after the Crisis Potomac Paper, No. 22, December 2014

CSIS expert Jeff Mankoff explains the reasons of the crisis in Ukraine, and how the U.S. should try to reestablish a more stable situation in central Europe, mixing containment and engagement of the Russian partner. 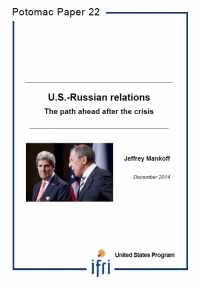 After 1991, Russia never became a full participant in the new European security order, which remained based on NATO and, to some extent, the European Union. The Ukraine crisis of today is in many ways a consequence of Russia’s ambiguous position in that security architecture, which Moscow is now seeking actively to overturn.

While the status quo may not be ideal, the U.S. and its allies have little choice but to defend it right now. Backing down under Russian pressure would set a disastrous example, not only in Europe, but in every part of the world where a U.S. security umbrella restrains interstate conflict.

In the short to medium term, the U.S. has few options.

Relying on economic and diplomatic sanctions has not had the desired effect so far, and encourages Russia in its belief that what the U.S. really seeks is regime change in Moscow.

U.S. policy needs to step up efforts to confront Russia in states that it seeks to destabilize. This can be done if NATO’s presence and deterrence are both more credible, and through financial and even (limited) military assistance from the West. Meanwhile, a negotiated settlement that recognizes at least Russia’s baseline interests in Ukraine must be sought.

In the longer term, containment needs to be supplemented by a real effort to reshape relations between the West and Russia along less zero-sum lines. While the prospect of Russia “joining” the West today seems more remote than ever, it remains conceivable that Moscow and the Western powers can find a modus vivendi that allows both to pursue their economic interests in the grey zone between them without posing an undue threat to one another’s security.

Figuring out where states like Ukraine, Belarus, and Moldova will fit in the European quilt will remain the most significant question. For now, though, the West needs to be sure it can negotiate from a position of strength, which requires strong trans-Atlantic unity and sufficient investment of financial and other resources in ensuring the success of Ukraine’s transition.

Naval Combat Redux: A Renewed Challenge for Western Navies
END_OF_DOCUMENT_TOKEN_TO_BE_REPLACED
Is the UN Security Council still relevant? France and Japan's views on the future of...