In December 2008, as part of the fight against climate change, the European Union adopted the Energy and Climate package that endorsed three objectives toward 2020: a 20% increase in energy efficiency, a 20% reduction in GHG emissions (compared to 1990), and a 20% share of renewables in final energy consumption. 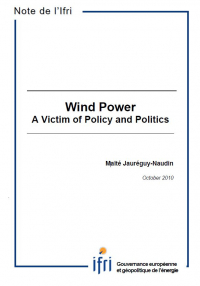 In December 2008, as part of the fight against climate change, the European Union adopted the Energy and Climate package that endorsed three objectives toward 2020: a 20% increase in energy efficiency, a 20% reduction in GHG emissions (compared to 1990), and a 20% share of renewables in final energy consumption.

Responsible for about 40% of European energy-related emissions, the power sector is key to the realization of these objectives. Renewables in electricity generation are expected to grow to around 33% to meet the objective set by the European Commission, up from 16.3% in 2009. Wind energy is expected to provide most of the extra renewable energy required in electricity generation to meet the objective. The share of wind power in EU 27 electricity production was 4.2% in 2008 and is steadily increasing.

Wind-power penetration has to be seen in the light of the mixes of power generation resources in different countries, which depend on their resources, on energy policies (past and current), and on the structure of electricity demand. As wind-power penetration becomes significant in some countries, the effects on the electrical system become more of a challenge. These effects include the reliability of electricity supply, merit order and dispatching decisions, the cost of electricity, and the operation of power plants.

Wind power is one of the lowest impact forms of electricity generation. As such, it is expected to play an increasing role in the fight against global warming. It contributes to energy security, bringing the benefits of a domestic resource and helping to diversify the portfolio of energy sources.

Larger penetration of wind power can affect electricity prices since electricity generated by intermittent energy sources has to be used when available. Wind-power electricity can be sold at even zero or negative prices. Negative prices reflect bottlenecks in the transmission system. They might not have yet a big negative effect on the electricity utilities but occurrences will increase with wind-power expansion, threatening utilities profits and therefore future investments. Electricity prices will remain highly volatile until the network is more integrated and transmission capacity is developed.

If we compare the costs incurred in supporting the wind industry with the result in terms of emissions reduction, the picture is rather unconvincing. The choices made by the most advanced European countries in wind-power development have been costly and have not yet yielded significant emission reductions. Denmark, Spain and Germany are among the largest-emitting countries on a per capita basis. Danish and German citizens pay a high price for their electricity, while in Spain conventional facilities have to cope with the increasing deficit between production costs and income. This might be the price that citizens are willing to pay now for supporting the development of a green technology - but for how long?

Support schemes need to be planned with more forethought and a better assessment of costs and benefits. Subsidy programs enabled rapid advances in wind technology, but this technology is now at the threshold of maturity. Periodic reviewing is a critical feature for any successful FIT scheme. Fixed FITs over too long a period will undermine the emergence of the most efficient and competitive actors. They also undermine development and commercialization of more successful alternatives. The difficulty is to plan ex ante the gradual phasing-out of support schemes: if this is done too early, the emerging market will collapse; if too late, the system threatens to be costly and eventually inefficient. Support schemes should be linked to the growing penetration of the technology on the market and its cost. However, in the case of wind-power energy, the impact on the overall electrical system should also be considered in order to make sure that additional operating costs do not exceed the added value of wind energy.

Renewable energy policies, though driven by common European objectives, are designed at the national level, whereas the impact of increasing amounts of intermittent energy stretches beyond borders. National ‘visions" harbor two main risks. First, state-established price systems often heavily subsidize chosen technologies to the detriment of others. When subsidies become too detached from real costs, governments are forced to make dramatic adjustments, such as can be seen at the moment in Spain, putting the burgeoning industry in jeopardy. Secondly, the vast amount of capital invested in chosen technologies might have been better shared across sectors.

These various factors show that more rationalization of wind power development and management is needed. The European Union must introduce low emitting technologies in electricity generation but needs to take into account all the costs of the energy that will be delivered to the consumer. They also indicate that wind farms need now to be placed carefully so the harvest of wind resources can be maximized.

Overall, the variability of wind-power generation can be dealt with by interconnection capacities to a certain extent, while the availability of sufficient thermal power plant capacity is maintained. If the network is not upgraded in time, this could jeopardize the benefit expected in GHG emission reduction.

Strong interconnections between neighboring countries are crucial for greater wind-power penetration. An objective on capacity production without a strategy to develop these links is bound to fail. One side of the equation is addressed at the national level, whereas the European objective requires a larger vision that would adequately prepare the European network to receive a massive amount of energy from wind.

The European Commission and member states need to define the appropriate framework to encourage infrastructural investment so that the cost is carried by all participants and to design it in such a way that it is cost-effective at both cross-border and national level. However, the building of new transmission lines requires consensus among stakeholders in a context where opposition to any kind of infrastructure is mounting. Compromises to overcome resistance invariably increase the overall cost and seriously delay the project.

They also need to address the coherence of support scheme policies among member states, since large amounts of wind power in the European network will affect the economic merit order.
Deployment of renewable energy is a key part of the fight against climate change, but it needs to be done cautiously so that it will effectively generate environment benefits without imposing unacceptable costs on society.

Turkey's Method in the Mediterranean : The Hold over...

Land Governance in the Outskirts of African Cities....