Since its creation in 2005, the European emission trading system (EU ETS) has been through several periods of turmoil. With emission allowances (EUA) averaging around 7 euros per ton from 2012 to 2017, European Member States have been trying to remedy the depressed price signals successively through market design reforms at both European level (backloading, market stability reserve) and national level, with the UK introducing a carbon price floor for its domestic power sector in 2013. 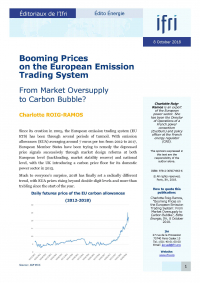 Much to everyone’s surprise, 2018 has finally set a radically different trend, with EUA prices rising beyond double-digit levels and more than trebling since the start of the year.

Several factors explain the steep rise in carbon prices since 2018, detailed here by decreasing order of impact on the market:

Beyond these market fundamentals, the price surge is also strongly encouraged by speculation from market players who are taking long positions on the EU ETS market, in anticipation of further increases in CO2 prices. As a reminder, financial market players do not need to return emission quotas at the end of the compliance year on April 30th, however their bullish behavior on the market further reduces supply of allowances available for EU industrial consumers which in turn pushes prices upwards. In addition, with prices expected to keep rising, utilities are encouraged to stockpile allowances as a protection against future volatility.

With current prices around 20-25 euros per ton even before the implementation of the MSR, most analysts have reviewed their figures and estimate the carbon price will reach 35 to 40 euros per ton in 2023. This begs the question as to whether a new balance has been reached in the EU ETS and whether the rise is fully justified by fundamentals, or if we are witnessing a bubble.

Yet, the EU carbon market is still not doing its job in the power sector

As a reminder, the EU ETS is an emissions cap-and-trade system englobing more than 11,000 of the heaviest polluting consumers across Europe (energy and industrial consumers as well as aviation), covering around 50% of European CO2 emissions and 40% of greenhouse gas emissions (GHG). The four phases of the scheme are designed to gradually increase the pace of emission cuts for the different sectors by progressively squeezing market supply for emission allowances.

Following the recent reforms, with a faster reduction of the annual emission cap, the MSR kicking in and a strong increase in allowance prices, consumers under the EU ETS are expected to either reduce their GHG emissions through low-carbon investments or to buy extra emission credits to compensate for their pollution excess. In particular, a switch from electricity produced by high-emitting sources to electricity produced by lower-emitting sources is anticipated from energy producers, leading to the progressive reduction of power production from coal and lignite sources in favour of gas and renewable sources.

However, if we look into the evolution of clean dark spread and clean spark spread[6] curves in recent months, which calculate the theoretical margins of coal and gas producers respectively after taking into account the new cost of CO2 emissions, it seems that both curves have neither converged nor switched across Europe, meaning that it remains cheaper to produce power from coal rather than switching to gas. In Germany for instance, clean dark and spark spreads are both in negative territory for modern coal-fired and gas-fired plants
(-2 euros/MWh and -11 euros/MWh respectively in April 2018).

In fact, external factors to the EU ETS need to be taken into account to explain why a switch from coal to gas sources has not happened yet: the clean spark spread remains less competitive because of recent increases in gas prices, in turn due to very low gas storage levels in Europe following the cold winter 2017/2018 and to competition from Asia on Liquefied Natural Gas tenders, and to the current increase in commodity prices. Moreover, improved thermal efficiency rates for coal-fired plants in some countries make it more difficult to compete with (e.g. three highly efficient plants in the Netherlands, commissioned in 2013).

Therefore, even in an environment where CO2 prices have trebled in the past nine months, the EU ETS still does not seem to incentivize a shift to low-carbon energy production sources, as CO2 prices are too low to compensate for other energy factors. In the current context, most analysts estimate that a price of around 40 to 50 euros per ton is the equilibrium point for CO2 for a switch from coal to gas to happen. The switch in fuel sources would happen first in Germany, Italy, the Netherlands and Spain due to their respective energy mixes and the efficiency rates of their respective power plants.

One could argue that although current carbon price levels are still too low to ensure a switch of power generation from coal to gas across Europe, a switch could happen over a three to four-year horizon. However, the bubble can still burst at any time and several factors contribute to a lack of visibility on the EU ETS going forwards:

In sum, even under the right CO2 price conditions, uncertainty and risk of rapid market shifts in the EU ETS remain a strong obstacle to low-carbon generation investments across Europe. In this context, national measures may still appear as the only way of guaranteeing the fuel switch going forward.

For several years, discussions around setting carbon price floors across Europe have taken place in order to foster greater emission reduction targets and an effective fuel switch from coal to gas, thereby adding another layer of market design to the EU ETS:

Carbon floors can bring a more stable solution, however they come with several disadvantages, the main one being competition distortion across the EU by shifting carbon emissions from one country to another if the scope of application is set nationally and ignores the option of importing power from neighbouring countries via interconnectors. In an increasingly interconnected network, only EU-wide or at least regional approaches are effective. Besides, the net environmental benefit carbon price floors is also disputable at present. Without an incentive to voluntarily cancel allowances at national level, carbon price floors may fall short of reducing emissions at European level.

Finally, although carbon price floors have come as an evolution to turn the European emissions market design into a more stable and foreseeable system, they cannot carry out fuel switching in the short term unless they are set at a sufficiently high level (40-50€/ton), which is probably inconceivable in terms of social acceptance. Carbon price floors are politically sensitive because they can be considered as additional taxation for final electricity consumers, and a coal phase-out requires extensive economic and social negotiations and adjustments. Therefore, a sound combination between administrative closures and regional commitments on carbon price levels are needed to ensure a workable and cost-efficient decarbonization of the power sector.

[2]. The MSR rules provide that between 2019 and 2023, 24% of quotas are placed in the reserve as long as the number of surplus allowances exceeds 833 million tons, and that 100 million tons are released from the reserve via auctions if the surplus becomes inferior to 400 million tons.