China’s 2018 energy consumption data capture the ambiguity of Beijing’s attitude toward climate change. Energy demand rose by 3.5% to 3,155 million tonnes of oil equivalent (Mtoe), with an increase of coal consumption (though its share in the overall energy mix is decreasing) and an expected greenhouse gas (GHG) emission surge of 2.3%, to 9.5 gigatonnes (Gt) for the same year. 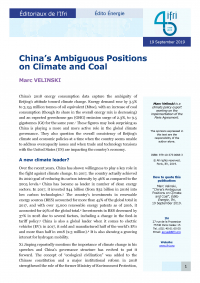 These figures may look surprising as China is playing a more and more active role in the global climate governance. They also question the overall consistency of Beijing’s climate and economic policies at a time when the country seems unable to address overcapacity issues and when trade and technology tensions with the United States (US) are impacting the country’s economy.

Over the recent years, China has shown willingness to play a key role in the fight against climate change. In 2017, the country actually achieved its 2020 goal of reducing its carbon intensity by 46% as compared to the 2005 levels. China has become a leader in number of clean energy sectors. In 2017, it invested $44 billion (from $32 billion in 2016) into low carbon technologies. The country’s investments in renewable energy sources (RES) accounted for more than 45% of the global total in 2017, and with over 15,000 renewable energy patents as of 2016, it accounted for 29% of the global total. Investments in RES decreased by 37% in 2018 due to several factors, including a change in the feed-in tariff policy. China is also a global leader when it comes to electric vehicles (EV): in 2017, it sold and manufactured half of the world’s EVs and more than half in 2018 (2.3 million). It is also showing a growing interest for hydrogen mobility.

Xi Jinping repeatedly mentions the importance of climate change in his speeches and China’s governance structure has evolved to put it forward. The concept of “ecological civilization” was added to the Chinese constitution and a major institutional reform in 2018 strengthened the role of the former Ministry of Environment Protection, re-named as the Ministry of Ecology and Environment (MEE). It was granted with the climate change portfolio, previously covered by the National Development and Reform Commission (NDRC).

In addition, climate change has become a key dimension of China’s foreign policy. Some consider that the approach regarding climate has changed over the past few years: it used to be considered mainly as a technical topic but is now seen as a political issue. The Ministry of Foreign Affairs is increasingly involved and active in international negotiations. After the US withdrawal from the Paris Agreement, China decided with a group of other countries to continue the high-level dialogues engaged beforehand. Beijing participated in the 2018 Global Climate Action Summit in California and also hosted preparatory meetings before COP24. It also co-chairs with New Zealand a segment on Nature-Based Solutions during the September 2019 Climate Summit of the United Nations (UN). In addition, China will host the presidency of the 15th meeting of the Conference of Parties to the Convention on Biological Diversity in 2020.

More generally, China plays an important role during the negotiations, putting the emphasis on the need for more commitments from rich countries, and for greater flexibility for poor countries. During COP23, it partnered with a group of countries “the Link-Minded Developing Countries” (LMDC) and more specifically Iran and India to advance the “common but differentiated responsibilities” principle. During COP24, Beijing insisted on the need for more reporting flexibility for developing countries. In the preparation of the September 2019 UN Climate Summit, it partnered with other emerging economies and stressed the responsibility of rich countries, while ignoring Secretary General Antonio Guterres’s call for more ambitious climate plans.

China remains highly dependent on coal. As such, it is the main GHG emitter of the world (but two times less per capita than the US). While its emissions stagnated at around 11.6 Gt during three years (from 2014 to 2016), they rose again in 2017 and 2018. Coal represents 59% of the national energy mix and according to some estimates, China has currently the equivalent of 259 gigawatts (GW) of coal capacity under construction at different stages (more or less the equivalent of the US capacity, adding up to the current 993 GW of current capacity in operation). Technologies such as carbon capture, storage and utilization also remain in infancy in China.

These additional projects may seem irrational, as China faces a power generation overcapacity. Coal activities of a number of State-Owned Enterprises (SOEs) have hurt their profits, with a low point in 2015. For instance, the State Development and Investment Corporation (SDIC), the largest Chinese SOE investment holding company with $200 billion of assets under management, suffered from a $519 million loss in its coal business during the year 2015. More generally, in 2018, about a half of coal power plants in China were facing net financial losses. On the power generation side, Huadian Datang Power has lost 7.1 million yuan since 2016 (approx. $1 million), half of which in 2019. Subsequently, the central government pushed for key SOEs to divest from coal activities, in order to concentrate them within a few key companies, such as Shenhua Coal and the China National Coal Group. This is also a way to close small installations suffering from low performance.

China is also exporting its coal technologies. Between 2000 and 2016, Chinese foreign investments in the energy field have primarily targeted fossil fuel projects: $54.6 billion to oil, $18 billion to natural gas against $29.4 billion to hydropower, $2.4 billion to solar power and $1.7 billion to wind power. China is currently involved in projects abroad representing the equivalent of 102 GW of additional coal capacity (26% of the current capacity under development in the world).

The Belt and Road Initiative (BRI) is another illustration of China’s ambivalence. The April 2019 BRI Summit saw the creation of both a “Green development coalition” with 25 member countries and “Belt and Road Energy Partnership” with 28 countries that, for most of them, do not overlap with the other ones. During the Summit, new thermal plant projects were announced in Pakistan, Cambodia, Indonesia and Turkey. Dubai and Argentina will benefit from solar farm investments. A majority of BRI loans is however dedicated to fossil fuels.

A lack of internal climate consensus

The implementation at the local level of sustainable growth strategies remains difficult and there is no consensus about it within the Party and government. This is partially due to reforms in 2014 and 2015 that transferred more responsibilities in terms of energy policies and environmental assessments. This immediately resulted in a surge of thermal plant projects approval: while the equivalent of 5 GW of capacity was approved every month on average in 2013 and 2014, that figure jumped to 15 GW in 2015. The central government answered in 2016 with a new system of approval, based on “traffic light colors” with red (blocking new thermal power projects), orange (issuing warnings) and green (allowing new projects) allocated to different provinces (see table). However, the equivalent of 245 GW had already been approved and the government is reducing its restrictions from 26 provinces in 2017 to 16 in 2018 and finally 8 from this year to 2022.

In addition, general compliance with environment policies is still an issue. Different reports from the MEE complain about fake data or fabricated documents provided by local bureaucrats, sometimes supported by local companies. Recent cheating has occurred in Henan, Yunnan, Guangxi as well as Guangdong. Officials in Henan province (south of Beijing) are also reported to have failed stopping illegal industrial activities in some protected natural areas. The same province has been allocated the equivalent of $12.55 million to protect wetlands but only spent 5% of it within two years. Another problem comes from corruption within the environment administration – according to some estimates, since 2012, 118 people have been involved in 63 corruption cases. These cases add up to the recent discovery of the widespread use of trichlorofluoromethane (CFC-11) in China, a very powerful climate pollutant banned by the 1987 Montreal Protocol.

Some influential voices are criticizing the green energy push. This is true for the conservatives, but not only: Lou Jiwei, former minister of Finance, has publicly expressed concerns about the impact that environmental measures may have on the economic growth. More generally, local governments suffer from the old habit of favoring economic growth and heavy industries over sustainable projects.

China’s climate policy is difficult to read, this is reflecting difficulties to rein local and corporate interests as well as concerns about a serious economic slowdown.

The capacity and willingness of China to meet the goals of the Paris Agreement is uncertain. A think tank recently called for absolute carbon caps which would be the only way to reach China’s emission peak by around 2030. On the one hand, on the sidelines of the July G20 meeting, China and France issued a joint statement, vowing to “scale up efforts to tackle the climate and biodiversity crisis” and the EU-China summit in April 2019 stressed that climate was a pillar of bilateral relations. Chinese officials announced that they would welcome reopening the dialogue on climate with the US during COP25. On the other, following the US withdrawal from the Paris Agreement and the shifts in US trade policies toward China, Beijing may well opt for short-term investments in heavy industry or fossil fuels that would boost economic growth – this is already happening for shale gas, and could be compelled to reduce subsidies for low carbon technologies. On the long run, this could fuel overcapacities and prove hardly viable though.

These uncertainties should be clarified by the 14th Five Year Plan for the period 2021 to 2025, which is under preparation. It is expected to be released early 2021 and should confirm China’s road to decarbonization (and possibly carbon caps, as mentioned above), yet with lower targets for wind and solar deployment. It could also complement the enhanced climate plan (nationally determined contribution – NDC) to be submitted to the UN in 2020, with higher climate ambitions.