The world plastic production has been multiplied by 23 since 1964 to reach 348 million tonnes (mt) in 2017. This production level is expected to double in the next 20 years, largely because of the significant growth in plastic consumption in developing countries. Today, China is the largest producer of plastics (representing nearly 30% of global production) and the European Union (EU) comes second (18.5%) with 64 mt. 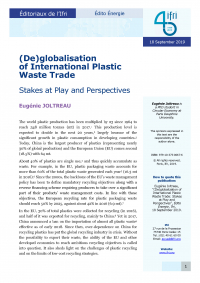 About 40% of plastics are single use, and thus quickly accumulate as waste. For example, in the EU, plastic packaging waste accounts for more than 60% of the total plastic waste generated each year (16.3 mt in 2016). Since the 2000s, the backbone of the EU’s waste management policy has been to define mandatory recycling objectives along with a reverse financing scheme requiring producers to take over a significant part of their products’ waste management costs. In line with these objectives, the European recycling rate for plastic packaging waste should reach 50% by 2025, against about 42% in 2016 (6.9 mt).

In the EU, 30% of total plastics were collected for recycling (in 2016), and half of it was exported for recycling, mainly to China. Yet in 2017, China announced a ban on the importation of almost all plastic waste effective as of early 2018. Since then, over-dependence on China for recycling plastics has put the global recycling industry in crisis. Without the possibility to export their waste, the ability of the EU and other developed economies to reach ambitious recycling objectives is called into question. It also sheds light on the limits of plastic recycling and of low-cost recycling strategies.

Plastics are cheap materials, but they are costly to recycle. Hence if oil prices are low, virgin plastics can reach the same or a lower price than recycled ones.

The first explanation is that sorting plastics is labour-intensive. The recycling process is also complex due to the wide range of plastic polymers, the use of blends, the presence of both chemical additives in the material and of residual impurities. Material properties tend to degrade during the recycling process. Hence, for those plastics that we can recycle, recycling can only be repeated a limited number of times. Finally, the process results in low-value materials for which there is not enough demand.

For example, for a clear polyethylene terephthalate (PET) bottle, one of the most recyclable plastic, the share of recycled PET in a new bottle never exceeds 50%. Hence, virgin plastics must be added to recycled materials during fabrication, creating a demand for virgin plastics. In most cases, the bottle will be recycled in an open-loop. For instance, a clear PET bottle can be recycled in a non-recyclable pullover.

In comparison, burning for energy recovery purposes is a more profitable option, due to the strong energy yield of plastics. Also, incineration seems to be the only option available when recycling possibilities have reached their limits, which leads to releasing carbon dioxide in the atmosphere. In 2016, 39% of plastics were incinerated for energy recovery in the EU.

EU countries have legal recycling targets so as to maintain materials in the economic loop. By exporting plastics to China, EU waste traders could find competitive prices and an important demand for plastic waste. Taken collectively, EU countries are the main exporter of plastic waste, followed by the United States (US). Over time, Europe has become very dependent on the Chinese market which absorbed 87% of European plastic waste exports in 2012. In fact, China needed affordable plastics for its increasing production of plastic products. At the same time, transportation costs were low because of the possibility to fill empty ships coming back to China with waste. In turn, exporting countries could comply with their recycling obligations at low cost, taking advantage of low transportation and labour costs, and laxer environmental standards.

To what extent was the waste effectively recycled and in what conditions? The documentary film Plastic China shed light on the poor and unsafe working conditions of Chinese recyclers. Jambeck et al. (2015) estimate that most plastic waste entering the ocean come from China and other South-East Asian countries, due to waste mismanagement. In turn, China complained about poor plastics quality or contaminated products in breach of standards and international commitments.

A deglobalisation of plastic waste trade driven by China

Since 1992, China has imported 106 mt of plastic waste, representing 45% of all cumulative imports. Since 2013, the Chinese government has taken measures to cut down on poor quality imports and local unregulated facilities. In 2017, China announced the “National Sword” measure to protect its environment and citizens’ health. This measure requires very high level of plastic waste purity for imports. Therefore, it is equivalent to a ban on the importation of most plastic waste. Brooks et al. (2018) estimate that this policy will displace 111 mt of plastic waste.

According to Greenpeace, “banned exports redirect to the next unregulated importer in a quick, but inefficient, fashion”. Mainly, waste exports have been redirected towards other South-East Asian countries. In turn, these countries are overwhelmed with huge amounts of plastic waste and start implementing their own restrictions.

To deal with these concerns, Norway proposed mixed, unrecyclable and contaminated plastics to be considered in the control system of the Basel Convention, aiming at preventing transboundary movements of hazardous wastes to developing countries.

As a result, plastic waste starts to accumulate in the main exporting countries. In some European and US cities, plastic waste starts deviating to incineration and landfills. Landfill generates methane, a gas with a warming potential that is 72 times higher than carbon dioxide. Hundreds of US municipalities now fail to earn revenues from their recycling program and stop recycling.

In reaction to the Chinese ban, a few European investment projects in recycling infrastructures and research facilities have been announced, but their precise impact on recycling capacities is still unclear. In the US, the press reports that Chinese recycling companies start to invest in local recycling plants.

China is now expected to further develop its domestic system of collecting, sorting and recycling, to deal with its already considerable waste feedstock. Brooks et al. (2018) estimate that plastic waste imports have only added 10 to 13% to the domestic plastic waste generated between 2010 and 2016.

No alternative to a circular economy approach and lower plastic use

Exporting pollution to one dominant commercial partner to fulfil recycling obligations is not a sustainable strategy. The solutions lie in developing local recycling capacities. Recycling contributes to preventing emissions of greenhouse gases (as compared to other methods). For example, 4.9% of France’s total 2014 emissions have been avoided thanks to the recycling activities. For the specific case of plastics, recycling only delay incineration or landfill. From that perspective, all plastics already and newly placed on the market shall be considered as future carbon emissions, while avoiding leakage in the natural environment.

A sharp decrease in our plastic use is needed, without increasing pressure on other natural resources as substitutes. Numerous countries have introduced a ban on plastic bags. In Europe, single-use plastic cutlery, cotton buds, straws and stirrers will be banned by 2021. Further efforts are needed in this direction.

For applications where it is hard to avoid plastics, efforts should be directed towards the development of plastics’ circularity. Innovation is also part of the solution, with, for instance, the discovery of an infinitely recyclable plastic polymer – PDK (polydiketoenamine) or of biodegradable plastics made from agricultural waste.

As for recycling in general, a fully functioning system implies high quality waste materials and enough demand for recycled materials. Hence, this also requires efforts by upstream stakeholders to design products suitable to recycling or compost and to favour the use of recycled materials in their production. Finally, recycling remains energy-intensive and should not be more encouraged than waste prevention.

The EU’s Renewables Expansion Challenge Towards 2030:...
END_OF_DOCUMENT_TOKEN_TO_BE_REPLACED
Neutrality and non-alignment after the Russian Invasion of Ukraine...