Solar Power in Sub-Saharan Africa after COVID-19: Healing the Ills of the Sector Édito Énergie, 29 May 2020

The electrification of sub-Saharan Africa is one of the great challenges of the 21st century. It is essential if we are to succeed in creating the 20 million jobs each year necessary to absorb the demographic growth of the region,[1] which is set to have 2.1 billion inhabitants in 2050, compared to 1.1 billion today.[2] 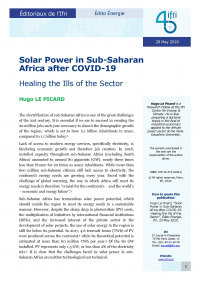 Lack of access to modern energy services, specifically electricity, is hindering economic growth and therefore job creation. In 2018, installed capacity throughout sub-Saharan Africa (excluding South Africa) amounted to around 80 gigawatts (GW), nearly three times less than France for 20 times as many inhabitants. While more than 600 million sub-Saharan citizens still lack access to electricity, the continent's energy needs are growing every year. Faced with the challenge of global warming, the way in which Africa will meet its energy needs is therefore "crucial for the continent’s – and the world’s – economic and energy future".[3]

Sub-Saharan Africa has tremendous solar power potential, which should enable the region to meet its energy needs in a sustainable manner. However, despite the sharp drop in photovoltaic (PV) costs, the multiplication of initiatives by international financial institutions (DFIs), and the increased interest of the private sector in the development of solar projects, the use of solar energy in the region is still far below its potential. In 2017, 4.6 terawatt hours (TWh) of PV were produced across the continent,[4] while its theoretical potential is estimated at more than 60 million TWh per year.[5] Of the 80 GW installed, PV represents only 1.5 GW, or less than 2% of the electricity mix.[6] It is clear that the challenges faced by solar power in sub-Saharan Africa are neither technological nor technical.

Unlike thermal power plants, almost the entire cost of a solar power plant is in capital expenditures (CAPEX). Solar investment therefore requires the certainty of cash flows over the entire lifetime of a plant – more than 25 years – to be financed under favorable conditions. Such a time horizon involves a lot of uncertainty. The risks perceived by the investors and financers are significant, because the utilities in sub-Saharan Africa are in a dire financial situation.

Thus, the sector is caught in a vicious circle: the poor financial situation of these companies lowers maintenance investments. The quality of services is deteriorating, the frequency and duration of power outages is increasing. This has negative effects on countries’ economies, incurring costs ranging from 1 to 5% of gross domestic product (GDP).[8] More and more users are refusing to pay for poor services, further reducing the income of utilities.

Sector planning is also lacking. Governments often simply roll out orientation plans but without a detailed roadmap. Cabinet reshuffling is particularly frequent in certain countries and slows down the development of the sector. Finally, the uncoordinated development of the legal and regulatory frameworks can lead to overlaps and contradictions between regulations relating to public private partnerships (PPPs) and sectoral regulations. The same is true for specific regulations on the import of materials for renewable energy. The simplified tax systems set up to encourage investments in renewable energies are not always aligned with the tax code or the investment code.

The deployment of centralized solar energy in the region is also limited by the absorption capacity of the networks. The transmission infrastructure is underdeveloped. If we exclude the Republic of South Africa, sub-Saharan Africa has on average 229 kilometers (km) of electrical transmission lines per million inhabitants (mh), compared to around 800 km / mh in France,[9] for a population density that is two and a half times greater than in France.

Improving the operational efficiency of the sector: a key issue

Reforms were already attempted in the 1990s to separate and liberalize the various activities of vertically integrated state enterprises. In many countries, the production sub-sector was opened first, to introduce competition into electricity markets, while responding to chronic shortages of capacity in the sector. However, the signing power purchase agreements (PPAs) between state-owned enterprises and IPPs does not require the continuation of reforms. These were mostly halted and IPPs found themselves producing at the margins, in markets with low levels of competition and in which state-owned enterprises have maintained strong control.[10] The priority should have been to ensure that the financial base of the system – the distribution sub-sector – is viable, with satisfactory quality of service provided to consumers, well-maintained infrastructures and revenues covering costs.

Building on these lessons, governments should now focus on improving the operational efficiency of the sector. This includes reducing technical and non-technical losses, improving revenue collection, limiting overstaffing and increasing tariffs. These measures can be divided into two groups: those that are technical and those that have a political dimension.

While progress has been made to reduce line losses, these are still significant in some countries. To reduce them, small solar power plants  – 5 - 20 Megawatts (MW)  – could have a role to play: they can be deployed in different locations across national networks, while being closer to cities, thus reducing the distance to be covered in networks and therefore partially limiting line losses. This market is starting to develop well in the region. To reduce unpaid bills, prepaid and smart meters can be deployed: they facilitate collection while allowing energy savings for the consumers. Finally, to improve the reliability of networks, it could be interesting to consider introducing auxiliary services. Models of service contracts to deploy back-up batteries could be developed, but almost no country has regulations in place that would allow private companies to get an income from these services.

Political risk measures are more difficult to implement. As for tariff increases, they are all the more recommended since the indirect electricity subsidies which arise from a loss-making sector benefit mainly countries’ wealthiest households. However, governments are reluctant to increase tariffs as this can cause social unrest. Uganda was able to increase tariffs in the 2000s to levels that cover costs, but then, only about 10% of the population had access to electricity and was therefore affected. When the electrification rate is high, the political risk associated with tariff increases is greater. These increases are also only possible if the quality of service has been significantly improved beforehand.

Tackling the COVID-19: an increased need for simplification and coordination between the various stakeholders

The roles of the different stakeholders present in the sector in sub-Saharan Africa need to be clarified in order to make the most of each ones’ abilities and ensure that the funds are allocated efficiently. DFIs are present in all market segments, and their multiple initiatives can lead to confusion and overlaps. For example, there are many guarantees for renewable projects. Their high number sometimes makes it difficult for States to identify the solutions best-suited to their situation. Finally, in some markets, such as electricity generation, DFIs sometimes compete directly with other DFIs and the private sector. DFIs should focus on market segments in which the private sector is not investing, such as networks.

There are different solar project attribution mechanisms, each with advantages and disadvantages. However, the use of tenders is widespread. These should be reserved for larger projects (50 MW +) as they can present disadvantages for small projects. Other models seem to have been proven to be more efficient for emerging markets. For example, setting up feed-in-tariffs with ambitious feed-in prices could be a good compromise for new markets and small projects.

The COVID-19 crisis will no doubt have major repercussions on African economies and therefore on the development of solar power in the region. In addition to sovereign debt problems, development aid is likely to be reduced. The possible depreciation of African currencies also risks raising the costs of new projects: all components of a solar power plant must be imported and paid for in hard currencies. Likewise, most PPAs are signed in dollars, transferring currency risk to governments, which buy electricity in dollars from the IPP and resell it in local currencies. In view of the current crisis, this could entail additional risks. Finally, the take-or-pay clauses of PPAs for existing projects will be severely tested. While these risk being activated due to the drop in electricity demand in the region, States, which are already lacking funds to protect the poorest from the health and economic impacts of the crisis will have the hard task of justifying the payment for electricity not consumed to public opinion. Compliance with this clause will nevertheless be an important test to assess the maturity of the various national markets. The ball is in the court of the States. They are the ones that can remove the main obstacles to investment faced by the private sector, which will have a key role to play more than ever.

[10]. K. Gratwick, R. Meyer and A. Eberhard, “Uganda’s Power Sector Reform. There and Back Again?”, Energy for Sustainable Development, April 2018.

The Political Economy of the Metaverse
END_OF_DOCUMENT_TOKEN_TO_BE_REPLACED
Critical minerals: How to secure stable and resilient supply chains? Views from Europe...