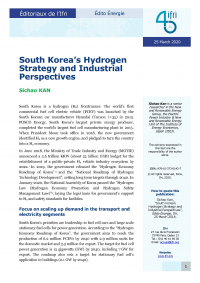 In June 2018, the Ministry of Trade Industry and Energy (MOTIE) announced a 2.6 trillion South Korean Won (KRW) (about 22 billion United States dollars - USD) budget for the establishment of a public-private H2 vehicle industry ecosystem by 2022. In 2019, the government released the “Hydrogen Economy Roadmap of Korea” and the “National Roadmap of Hydrogen Technology Development”, setting long term targets through 2040. In January 2020, the National Assembly of Korea passed the “Hydrogen Law (Hydrogen Economy Promotion and Hydrogen Safety Management Law)”, laying the legal basis for government’s support to H2 and safety standards for facilities.

Focus on scaling up demand in the transport and electricity segments

South Korea’s priorities are leadership in fuel cell cars and large scale stationary fuel cells for power generation. According to the “Hydrogen Economy Roadmap of Korea”, the government aims to reach the production of 6.2 million FCEVs by 2040 with 2.9 million units for the domestic market and 3.3 million for export. The target for fuel cell power generation is 15 gigawatts (GW) by 2040, including 7 GW for export. The roadmap also sets a target for stationary fuel cell’s application in buildings (2.1 GW by 2040).

By September 2019, the country has 24 H2 refilling stations (HRS). The government plans to build 310 HRS by 2022 and 1,200 HRS by 2040. At present, about half of the HRS’ installation cost is subsidized by the government. In March 2019, a special purpose company, Hydrogen Energy Network (HyNet), was established by the central government and 13 companies, which aims to build around 100 HRS in the country by 2022.

The country’s biggest car manufacturer Hyundai is betting big on H2. According to its FCEV Vision 2030 (released in December 2018), the company plans to expand its fuel cell production capacity to 700,000 units per year by 2030, with 550,000 for personal and commercial vehicles and the rest for forklifts, vessels, drones, rolling stocks, etc. As a first step, Hyundai is building its second fuel cell manufacturing plant, which is expected to bring the company’s capacity to 40,000 fuel cell units per year by 2022 up from its present level of 3,000 units per year.

One of the government’s supports for fuel cell power generation is the Renewable Portfolio Standard (RPS) policy, which has been implemented since 2012. Under the RPS, large power producers are mandated to meet a minimum portion of their power generation from new and renewable technologies, including fuel cell power generation. The producers can also buy Renewable Energy Certificates (REC) to fulfill their obligation. RPS obligatory share will be increased from 7% in 2019 to 10% by 2022. REC is issued based on renewable power generation (MWh) and the specific technology. For example, for onshore wind, the weight for REC is 1 and for fuel cells, the weight is 2.

Korean Southern Power Company (KOSPO) completed construction of a 20 MW fuel cell Combined Heat and Power plant in Incheon in 2018. The fuel cell systems were supplied by FuelCell Energy. Doosan Fuel Cell announced in August 2019 that together with other partners, it began work on the world’s largest fuel cell power plant (around 50 MW) in Seosan.

Either for H2 powered vehicles or for stationary fuel cells, H2 distribution infrastructure is of great significance. In December 2019, as part of the government’s effort to facilitate the infrastructure development, Ansan, Ulsan, Wanju/Jeonju and Samcheok were selected as pilot cities, eligible to subsidies.

The vision for the H2 pilot city program is to build the necessary infrastructure for H2 production and distribution systems and to utilize H2 for the city’s cooling, heating, transport and electricity supply. Ansan is an industrial city where H2 is seen as a booster for its industrial revival. Although most of the H2 is supposed to come from natural gas reforming, the city also plans to supply green H2 from the nearby Sihwa Lake Tidal Power Station (254 MW). Ulsan, which was also involved in the 2012 Demonstration of Hydrogen Town Project, is a city with long history of promoting H2 industry. The city holds one of the largest petrochemical complexes and has the advantage of cheap by-product H2 supply. In the Wanju/Jeonju (the two cities are about 10 kilometers (km) apart) case, Wanju will serve as a H2 production site and Jeonju as a demand center. Jeonju holds one of Hyundai’s manufacturing plants for buses, trucks, and other heavy-duty cars.

Lastly, the country’s gas industry is mobilized. Korea Gas Corporation (KOGAS) laid out its 2030 H2 business development targets in its May 2019 investor presentation: construction of 25 H2 production plants, more than 700 km of H2 pipelines and operation of 110 HRS and 500 H2 tube trailers by 2030.

Clean hydrogen is not a priority but imports are considered

South Korea’s strategy on H2 at this stage is not as climate-friendly as other countries’: it implies a scale up of carbon intensive H2 produced from petrochemical plants or natural gas reforming without carbon capture and storage (CCS). The potential role of clean H2 for decarbonizing the industry sector is not mentioned.

The government pledges to increase the share of renewable energy in its power generation mix to 20% by 2030 and 30%~35% by 2040, from 6.5% currently 2017 (excluding distributed solar Photovoltaic - PV). Some of the new supply could come from domestic green H2. In April 2019, KEPCO signed a memorandum with the local governments, Jeollanam-do region and Naju city for green H2 and Power to Gas (PtG) technology development and demonstration. The company also signed the Green Hydrogen Cooperation memorandum with 17 companies and institutes. However, South Korea’s renewable power generation costs are among the world’s highest. According to a study by Korea Energy Economics Institute, power generation cost of solar PV is around 10~12 USD cent/kWh (in 2018) and onshore wind is around 12 USD cent/kWh (in 2017). The International Energy Agency (IEA) estimated that the renewable electricity cost needs to be 1~4 USD cent/kWh (with full load hours of 3,000~6,000 hours per year) for electrolysis to be competitive with H2 produced from natural gas (with CCS). To make domestic green H2 economically viable, as well as to meet the country’s renewable energy goal, a dramatic cost reduction of renewable power generation is necessary, alongside a genuine carbon market.

South Korea also eyes clean H2 imports from overseas. Shipping H2 is much more difficult than liquefied natural gas (LNG) and at present there is no established technology for H2 shipping. Liquefied H2, liquid organic H2 carriers (LOHCs), and ammonia are the three main H2 shipping options. Although no demonstration project has been announced, South Korea is preparing for future H2 import. South Korea and Norway announced cooperation on shipbuilding for liquefied H2 transportation in June 2019. Daewoo Shipbuilding and Marine Engineering is studying the possibility of using ammonia as ship fuel. H2KOREA, a private-government body connecting central government and local government with private companies, signed a memorandum with the Australian Hydrogen Council. And in September 2019 KOGAS signed an agreement with Australia’s Woodside Petroleum to examine the feasibility of a green H2 pilot project. Almost all of South Korea’s LNG import is handled by KOGAS and the company aims to import 0.3 million tons of H2 by 2030 and 1.2 million tons by 2040.

By 2040, the government aims to have 70% of the country’s H2 demand met by clean H2 (either produced from domestic renewable energy or imported from overseas). This also means that even in the long run, a substantial part of the country’s H2 supply will still be grey, which is hardly compatible with the requirements from the Paris Agreements and the clean H2 trend in other countries.

The country’s H2 strategy is primarily driven by economic growth and industrial competitiveness ambitions and to a lesser degree, by environmental concerns. This contrasts with many European countries, where the promotion of clean H2 is to enable a deep decarbonization. The difference can partly be attributed to South Korea’s lower Greenhouse Gas (GHG) reduction target: -37% GHG reduction from the business-as-usual level by 2030, part of which is supposed to be met by carbon credits from international market.

In May 2019, a H2 storage tank at a government research project exploded leaving two people dead and six injured. Following the explosion, there were protests by resident groups against H2 facilities being built in their region. This setback did not derail the country’s efforts. In August 2019, President Moon’s new official car, a FCEV made its debut. Seoul Mayor Park Won-soon also made FCEV his official car and he announced at a forum in October 2019 that the Seoul metropolitan government is going to subsidize 4,000 FCEVs by 2022. Safety issues were further addressed by the Hydrogen Law (Hydrogen Economy Promotion and Hydrogen Safety Management Law).

Yet the strong government support that fueled the H2 momentum also represents one of the uncertainties. Next parliamentary elections are scheduled for 15 April 2020. Although the Hydrogen Law gives some assurance over long term consistency of government support, whether the current government’s spending on H2 promotion programs will be maintained or not is a question mark. Lately, the country’ ruling Liberal Party laid out a Green Deal proposal aiming for carbon neutrality by 2050. This would require serious adjustments to the H2 strategy, and a robust carbon instrument.