The US Oil Embargo on Iran: A New Oil Shock? Edito Energie, October 2018

The 14 July 2015 Vienna agreement on Iran’s nuclear activities (Joint Comprehensive Plan of Action – JCPoA) was a game changer on the geopolitics in the Middle East and for the oil market. The oil sanctions were lifted and Iran increased significantly its production and exports. On 8 May 2018, President Trump announced that the United Stated (US) would withdraw from the agreement. Financial sanctions were reintroduced. From 5 November 2018 onwards, further sanctions will be re-imposed more specifically on petroleum related transactions, including the purchase of petroleum, petroleum products and petrochemical products. What could be the impact of this new embargo? Is there a risk of a new oil supply and price shock? 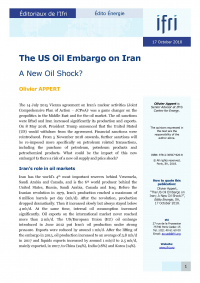 The US Oil Embargo on Iran: A New Oil Shock? Download
0.53 Mo

Iran has the world’s 4th most important reserves behind Venezuela, Saudi Arabia and Canada, and is the 6th world producer behind the United States, Russia, Saudi Arabia, Canada and Iraq. Before the Iranian revolution in 1979, Iran’s production reached a maximum of 6 million barrels per day (mb/d). After the revolution, production dropped dramatically. Then it increased slowly but always stayed below 4 mb/d. At the same time, internal oil consumption increased significantly. Oil exports on the international market never reached more than 2 mb/d. The US/European Union (EU) oil embargo introduced in June 2012 put Iran’s oil production under strong pressure. Exports were reduced by around 1 mb/d. After the lifting of the embargo in 2015, oil production increased to an average of 3.8 mb/d in 2017 and liquids exports increased by around 1 mb/d to 2.5 mb/d, mainly exported, in 2017, to China (24%), India (18%) and Korea (14%).

President Trump’s decision is taking place in the context of a tightening oil market. The Brent price has been toping $75/barrel since end of August and $80/barrel since end of September 2018, and the West Texas Intermediate has been over $70/barrel since mid-September 2018. Oil demand is anticipated to increase by around 1.3 mb/d in 2018 and 1.4 mb/d in 2019 according to the International Energy Agency’s (IEA) latest Oil Market Report,[1] a slowdown from past years, as a consequence of higher prices and weaker economic growth. Oil stocks are at their lowest level for the last two years. Petroleum products stocks are below the last five years’ average. This is the result of the “OPEC+” strategy which is a success in that sense.[2]

Donald Trump has been concerned by a potential impact of his JCPoA decision on the price of oil. The price of gasoline in the US increased already from $2.4/Gallon in mid-2017 to almost $3/Gallon. In the context of the mid-term elections in mid-November, the price of US gasoline matters. So he pressured the OPEC oil producers to increase their production. At its 22 June 2018 meeting in Vienna, OPEC+ producers agreed on the proposal of Saudi Arabia and Russia to increase their quotas by 1 mb/d despite the opposition of Iran, and the USA was the elephant in the room at that meeting. But in fact, that agreement is unclear. Saudi Arabia and Iraq increased their production and exports since then, so that OPEP’s production is at its highest level in the year, offsetting the drop of production in Venezuela and Iran. Non-OPEC supply is also growing, driven by the US and Russia, so that total global liquids supplies are now close to 100 mb/d.[3] However, demand remains robust, prices are high, not least because of continued strong geopolitical risks.

Possible impacts of the embargo

The US administration is putting a strong diplomatic pressure on every consumer of Iranian oil in order to phase out any import by 5th November. US Secretary of State, Mike Pompeo is very vocal on his tweet account against Iran: “Iran’s corrupt regime is wasting the country’s resources on Assad, Hezbollah, Hamas and Houthis while Iranians struggle” (27 June); “Iran has a repugnant record of religious intolerance” (26 July). The issue of Iran’s oil exports is at the core of many of his international visits, as was the case in India (5 September).

On average in the first six months of 2018, Iran crude oil loadings were split between China (26%) and India (24%), EU (20%) plus Korea, Turkey, Japan and marginally, other emerging economies. European countries will phase out their imports. Korea recently took the same decision. In the context of a trade conflict with the US, it is unlikely that China will phase out its imports. Recently, the Indian Government authorized Indian state-owned refiners to continue to import Iranian crude on a Cost, Insurance and Freight basis,[4] but Indian companies are expected to dramatically reduce their imports in the coming weeks.

In a nutshell, we may come back to the situation before the lifting of the embargo in 2015: that means a reduction of Iranian oil exports by 1 mb/d, but possibly, of up to -1.5 mb/d. Already, Iranian crude exports have fallen significantly before US sanctions even take effect. Iranian production has already fallen at the lowest since July 2016 at 3.63 mb/d as buyers retreat ahead of the deadline for the new US sanctions. Exports are below 2 mb/d.

The economic crisis in Venezuela is crushing the country’s output to the lowest in decades. At the same time there are uncertainties on the short term supply levels from countries such as Libya (which has recently recovered but remains volatile), Iraq or Nigeria. “Things are tightening up”, according to the IEA’s September Oil Market Report: “If Venezuelan and Iranian exports continue to fall, markets could tighten and oil prices could rise unless there are offsetting production increase elsewhere”.[5]

Saudi Arabia lifted output to close to 10.6 mb/d but that will not be enough to offset a further fall in supplies from Venezuela. We need to take into account the fact that the spare production capacity of OPEC countries is rather small: 2.7 mb/d, 60% being located in Saudi Arabia which has never tested its declared maximum production capacity. Additional barrels are expected to come from non-OPEC producers in the short term: US (but companies are facing issues related to cost increase and bottlenecks related to internal infrastructure logistics), Canada, Russia, Brazil (yet facing serious problems).

We may also consider a more dramatic scenario. On 3 July 2018, Iran’s President Hassan Rohani hinted at the possibility of blocking the Strait of Hormuz if unilateral US sanctions are applied against Iran. He declared that either the whole world can use the strait or none. On 5 July 2018, the Commander-in-chief of the Guardian of the Iranian Revolution, Mohammed Ali Jafari, declared that he was all set to block the Strait of Hormuz. The US Government took this threat seriously. Mike Pompeo answered in a tweet on 27 August: “The Islamic Republic of Iran does not control the Strait of Hormuz. The Strait is an international waterway. The US will continue to work with our partners to ensure freedom of navigation and free flow of commerce in international waterways.”

The transit through the Strait is representing around 20% of the world’s oil consumption (18 mb/d) and more than 25% of the international LNG trade. The blocking of the Hormuz Strait is not a fiction. During the Iraq/Iran war, there were attacks of oil tankers in the Persian Gulf. These attacks had almost no consequences on the oil market as far as the market was oversupplied after the 1986 oil countershock. Yet this is not the case today. We may also note that the Iranian Army has tested missiles in front of the Strait.

A total closure of the Strait would create a dramatic oil shock as far as there are no alternative routes to export oil and liquefied natural gas from Kuwait, Qatar, Iran and the United Arab Emirates (UAE). Saudi Arabia may export 5 mb/d through the East-West pipe line to the Red Sea (currently being upgraded). Yet the country temporarily stopped exports via the Bab El-Mandeb strait linking into the Red Sea in summer in fear of attacks on its oil tankers due to the Yemen war nearby,[6] so that the country would then only rely on the Suez Canal and the 2.5 mb/d Sumed oil pipeline through Egypt to the Mediterranean for exports. A share of Iraqi production is exported through the pipeline from Kirkuk to Ceyhan on the Mediterranean Sea, yet transit is regularly interrupted by terrorist attacks and rarely reaches its maximum capacity of 0.8 mb/d.

Only a small share of UAE’s oil production may be exported through the pipeline between Habshan and Fujairah in the Gulf of Oman. As a consequence, a blockage of the Strait would take off the international market at least 10 mb/d of oil (10% of global demand) and about 100 bcm of natural gas on an annual basis.

Assessing Iran’s ability to block the Strait is complex and difficult. It is obvious that the US would react immediately as stressed by Mike Pompeo. The US Fifth Fleet based in Bahrain is charged with guaranteeing free movement in the Gulf, applying the Carter Doctrine, according to which US access to hydrocarbons in the Gulf is an issue of national security. The spokesperson for the US Central Command confirmed that the Pentagon was taking measures in this respect. While it is clear that leading naval forces in the region (France, United Kingdom, China and India) also have plans, so has Iran.

The closure of the Strait appears as a last resort measure since it would also prevent Iran from accessing global oil markets and trade routes. It becomes more likely if Iran’s exports are dramatically curtailed or if the regional tensed situation deteriorates further. Attempting to close the Strait would isolate Iran from the international community. However, it may be an effective tool of dissuasion as well as internal mobilisation. Iran may launch terrorist attacks on oil tankers in the Gulf focused for example on specific countries such as Saudi Arabia: this was the case during the Iraq/Iran war. Buyers would immediately be reluctant to load oil in the Gulf and the insurance tariffs would skyrocket. Iran may also mobilise “more traditional tools” through their informal networks in the Shia Crescent, Hezbollah, Hamas or Houthis. This would further destabilize the Middle East whatever the reactions of the US and Saudi Arabia, which are unpredictable, may be.

In a nutshell, in any scenario, the US oil embargo will create a situation where geopolitics will dominate a very volatile oil market.

The Eurozone’s Vulnerabilities and Risks