2019 has marked a fundamental turning point in the energy transition of the European Union (EU). 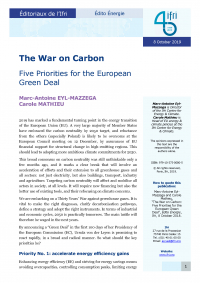 The War on Carbon. Five Priorities for the European Green Deal Download
0.51 Mo

A very large majority of Member States have embraced the carbon neutrality by 2050 target, and reluctance from the others (especially Poland) is likely to be overcome at the European Council meeting on 12 December 2019, by assurances of EU financial support for structural change in high-emitting regions. This should lead to adopting more ambitious climate commitments for 2030.

This broad consensus on carbon neutrality was still unthinkable only a few months ago, and it marks a clear break that will involve an acceleration of efforts and their extension to all greenhouse gases and all sectors: not just electricity, but also buildings, transport, industry and agriculture. Targeting carbon neutrality will affect and mobilise all actors in society, at all levels. It will require new financing but also the better use of existing tools, and their refocusing on climate concerns.

We are embarking on a Thirty Years’ War against greenhouse gases. It is vital to make the right diagnoses, clarify decarbonisation pathways, define a strategy and adopt the right instruments. In terms of industrial and economic cycles, 2050 is practically tomorrow. The main battle will therefore be waged in the next years.

By announcing a “Green Deal” in the first 100 days of her Presidency of the European Commission (EC), Ursula von der Leyen is promising to react rapidly, in a broad and radical manner. So what should the key priorities be?

In the deep decarbonisation scenarios of the EU, put forward by the EC in November 2018, the demand for primary energy is cut by at least a third, and by up to 50% in 2050, with respect to 2005 levels. This will require a gigantic effort, given that energy consumption in the EU (both primary and secondary) has again been rising since 2014, driven mainly by buildings (weather-related changes, slowdown in renovation efforts) and transport (traffic growth, high sales of sport utility vehicles). The 2020 goals may not be achieved. Furthermore, analysis of the draft National Energy and Climate Plans (NECPs) for 2030 indicate a substantial gap between strategies put forward at Member State level and the European target based on EE gains of at least 32.5% by 2030.

The latest European EE Directive does include a revision clause by 2023, but above all the implementation of the Directive needs to be accelerated. The toolbox is well-established: EE standards for appliances within the EU; measures favouring the circular economy; binding targets and certificates for saving energy; energy performance standards for new buildings; and financial support for renovating existing buildings. While more national and European financing needs to be mobilised, as envisaged by the European Investment Bank (EIB), increasing effectiveness is an immediate and primary goal. This relates to: technical assistance for project leaders; the simplification of support measures; measures for verifying progress; training construction professionals; combating fraud; and sensitisation campaigns. Brussels needs to launch a general EE mobilisation and draw on Member States, regions and cities to take action.

Priority No. 2: a strategy for the complete decarbonisation of electricity by 2040

There is no denying the efforts that have been made to improve the operation of the internal electricity market under the outgoing EC. But the Clean Energy Package does not strive for the total decarbonisation of electricity. The key here lies in developing a decarbonised electricity system at the lowest cost possible, with guaranteed supply and drawing fully on the complementarities of national energy choices. Such a system would include production and storage facilities of varying cost. Some would be decentralised and others large-scale, but all of them would also be complementary. The challenge is to identify such facilities and plan their deployment, as well as provide the right signals for investment.

In 2018, about 54% of total EU electricity production was decarbonised. However, the EU’s nuclear fleet (accounting for 25% of total electricity production) is aging, and only four reactors are currently under construction. Moreover, Germany and Belgium have planned to pull out of nuclear energy by 2022-2025. The EU cannot avoid a serious discussion on the long-term role of nuclear in the perspective of carbon neutrality. It needs to provide an adequate investment framework for new reactor projects that are safe and competitive, while supporting innovation in finding solutions for nuclear waste; or to fully weigh the implications of losing its nuclear baseload and developing alternative solutions.

An acceleration in the deployment of renewable energy sources (RES) is imperative. But what is the growth margin of RES? Germany, for example, needs to double its number of wind turbines. Yet, is this realistic given the multiple challenges (the sustainability of installation, connectivity and intermittency management costs, land use, power lines, societal resistance, etc.)? The EU needs to clarify the potential for small-scale and large-scale production (offshore wind in the North Sea or solar power in the south for example), and subsequently define a target architecture for the European electricity grid, as well as the associated regulatory framework.

The phasing out of coal power generation – at this stage 70 out of 140 gigawatts (GW) by 2030 – should accelerate thanks to a rapid decrease in free allowances on the carbon market. Gas-fired power stations have an important role to play, but they will also need to be removed from the system in the longer term, unless they can be converted to green gas use or carbon capture & storage (CCS) facilities can be installed. An EU regulatory framework has to be set up (content, certificates, grid-injection conditions) to foster the development of green gas.

How are the rise of intermittent renewable production and the concomitant loss of baseload conventional generation to be dealt with? Beyond hydroelectricity, multiple solutions must be mobilised, such as interconnections, demand response, stationary storage or sector coupling. But coordinated, anticipatory work is essential to clarify the need for hourly, daily, weekly or even inter-seasonal flexibility, and then to measure the economic, environmental and societal opportunity of each of these options at the system level.

There is a consensus about doubling the electrification of energy uses, currently in the order of 25%, and even going beyond 50%. But an all-electric strategy has its limits, including: risks of exploding costs in transmission and distribution networks; over-investment due to demand peaks; and soaring system costs. The storage of electricity could be coupled with the transport or gas sectors. In the case of mobility, a life-cycle analysis has also revealed that certain segments (captive fleets, freight, etc.) would be better served by hydrogen or biomethane solutions than by batteries. Again, the challenge lies in obtaining an overall consistency in solutions.

Profound changes will occur after 2030. There will be different energy systems depending on regions, and nothing is set in stone at this stage. This implies a clear commitment to technological neutrality but also requires mastering value chains and achieving lower costs. Decarbonised hydrogen will play an increasingly important role in industry and transport or in providing seasonal storage of electricity. Different countries or regions in the EU will favour different manufacturing processes and uses, local or remote: electrolysis from abundant, cheap, low-carbon electricity; steam reforming of natural gas if the gas is cheap and if CCS is possible; pyrolysis of natural gas or biomethane if they are inexpensive, and if carbon can be used in a profitable manner. Costs are still very high and processes are not mature, but pilot projects need to evolve into large-scale industrial projects; end processes and uses must be tested and sufficient demand should be created to achieve cost reductions.

Priority No. 4: achieving a just transition with economic opportunities

The costs of the low-carbon transition will be very high, yet much lower than non-action, and this transformation can also be an engine of growth. The social acceptability of this transformation will depend on two main factors: the ability to deploy compensatory measures for those who will be hit hardest by the changes, such as low-income households and workers in the carbon-intensive sectors; and the ability to make the low-carbon transition a lever for creating quality jobs and added-value.

Despite its limited powers in tax matters, the EU can play a facilitating role. In particular, the 2003 Energy Tax Directive needs to be revised to require all Member States to end fossil-fuel subsidies and incorporate environmental and equity considerations into national schemes. Similarly, a political agreement needs to be reached in order to obtain precise commitments on the removal of coal, supplemented by the creation of a fund dedicated to a Just transition, within the next EU budget (2021-2027) and a focused effort by the EIB. Launched in 2017, the “Platform for coal regions in transition” must provide technical assistance to territories and must especially measure progress.

Moreover, the EU needs to adopt an industrial strategy for low-carbon technologies. This implies deploying more financial resources for research and innovation, but above all a change of scale, to achieve the industrial deployment of innovation. It also involves structuring competitive industries, supporting skills development, and encouraging cooperation and other pilot projects centred on value chains. Competition in digital and low-carbon technologies constitute a real economic war in which the EU is still too-poorly equipped. Offshore and floating wind power, decarbonised hydrogen, carbon capture and re-use, forest management, civil nuclear power and nuclear waste disposal, batteries, recycling, and smart grids are all priority areas. An EU agency for the energy transition would be a useful vehicle for coordinating EU, national and local initiatives, in terms of industrial strategy but also to inform choices on energy mixes and investments.

Priority No. 5: going on the offensive in climate diplomacy

The evidence is worth considering: the more the decarbonisation progresses, the higher the marginal cost of CO2 avoided in the EU becomes, compared to our neighbourhood. The EU cannot be a carbon-free island in a world that more or less pursues a business as usual trajectory, and the EU must protect its economy. Some low-carbon energy sources can be imported at a lower cost than if they are produced here. The EU has an interest in involving its neighbours and partners in its energy transition so that they too transform themselves and continue to develop. We must therefore rethink our relations with Russia, Ukraine, Turkey, Egypt, Algeria and Morocco especially. And think of a strategy for the sustainable electrification of sub-Saharan Africa and the sustainable transformation of cities in the region.

In addition, if carbon pricing is to cover all sectors and increase progressively, the EU must also ensure that the decline in domestic emissions is not offset by an increase in imported emissions (carbon leakage and delocalisation). The introduction of a carbon tax on the EU’s borders is a condition for achieving carbon neutrality and reducing vulnerability. It is necessary therefore to carry out rigorous preparatory work to remove the many practical obstacles to estimating the carbon content of the main carbon-intensive products imported by the EU, as the climate efficiency of measures will be the main guarantee of their legal robustness. Finally, it is unthinkable that new trade agreements may be concluded without binding clauses concerning policy alignment with the Paris Climate Agreement.

The EU therefore faces not a Phoney War, but a Thirty Year’s War. It needs to develop its power and make use of it. Being divided will be tantamount to losing. And the main battle has already begun, namely that of mobilisation.

Building Bridges over the Blue Pacific. Beyond Marine...
END_OF_DOCUMENT_TOKEN_TO_BE_REPLACED
Asia after the War in Ukraine: Re-imagining multilateralism and the risk of...