Up until recently, little attention has been paid to the crisis which the Ethiopian regime has nonetheless been sinking into for more than two years. The rare spotlights focused on this country have praised its economic performance, describing it as a new “Far East” or even an “African lion”. The violence and imprisonment aimed at activists, journalists, and a good many citizens have remained hidden. 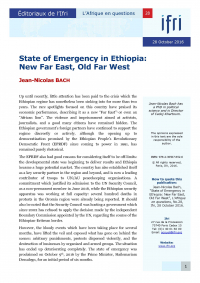 The Ethiopian government’s foreign partners have continued to support the regime discreetly or actively, although the opening up to democratisation promised by the Ethiopian People’s Revolutionary Democratic Front (EPRDF) since coming to power in 1991, has remained purely rhetorical.

The EPRDF also had good reasons for considering itself to be off-limits: the developmental state was beginning to deliver results and Ethiopia became a huge potential market. The country has also established itself as a key security partner in the region and beyond, and is now a leading contributor of troops to UN/AU peacekeeping organisations. A commitment which justified its admission to the UN Security Council, as a non-permanent member in June 2016, while the Ethiopian security apparatus was working at full capacity: several hundred deaths in protests in the Oromia region were already being reported. It should also be noted that the Security Council was hosting a government which since 2002 has refused to apply the decision made by the independent Boundary Commission appointed by the UN, regarding the course of the Ethiopian-Eritrean border.

However, the bloody events which have been taking place for several months, have lifted the veil and exposed what has gone on behind the scenes: arbitrary punishments, protests dispersed violently, and the destruction of businesses by organised and armed groups. The situation has ended up deteriorating completely. The state of emergency was proclaimed on October 9th, 2016 by the Prime Minister, Hailemariam Dessalegn, for an initial period of six months.

In order to properly understand the issues of identity discourse which sometimes shape the protests, it would be necessary to go back to the territorial conquests of Menelik II, that is to say to the foundation of the modern Ethiopian state. Menelik II, the Amharic king of the Shoa region, became the Ethiopian emperor in 1889 and succeeded the Tigrayan, Yohannes IV. As King of Shoa, and then Emperor of Ethiopia, he built an empire by extending the borders to form the present-day Ethiopia by negotiation or by force. At the end of the 19th century, the Oromia and Amhara regions were subdued and from then on were part of the developing state. The Solomonic dynasty ruled until the last emperor, Haile Selassie, was deposed in 1974. Mengistu Haile Mariam’s military regime succeeded him (1974-1991), then it was the Tigrayans from the Tigray People’s Liberation Front (TPLF), the dominant party within the EPRDF, who reclaimed their right to run this country by taking power in Addis Ababa in 1991. The ethnic federalism established by the EPRDF was meant to enable the peaceful co-existence between the some 80 “Nations, Nationalities, and Peoples of Ethiopia” (1995 Constitution).

However, the ethno-federal system did not result in an equitable power-sharing, with the economic, political, and security drivers remaining largely controlled by the TPLF[1], and in a system where political representation is now largely determined by its “national” affiliation, political tensions are often along these divides, and the Tigrayan elite is being accused of ruling without sharing power. Consequently, an event has recently sparked trouble against a background of high tension.

The Master Plan, an urban expansion plan for Addis Ababa, was announced by the regional authorities in May 2014. The Ethiopian capital, also a landlocked city in the federation, is in the centre of the Oromia region, the most populated and largest region in the federation (around 35% of the population). In other words, extending Addis Ababa’s boundaries, is in fact absorbing Oromia’s lands. The announcement of the Master Plan immediately caused outcry and protest groups met in cities and universities in the region.

With the forthcoming general elections in 2015, the EPRDF said it was ready to negotiate on how to expand the capital. However, it unilaterally revived the project once its electoral victory was assured, causing a second wave of protests in November 2015, on a larger scale than the previous ones. The protests increased in the region and this time took the name of “Oromo Protest” on social media, and protests went on even after the official announcement of the withdrawal of the Master Plan in January 2016. Videos testifying the extremely violent reactions by the security forces, humiliations and widespread abuses inside campuses and dormitories circulated on the internet and on social media[2].

However, the Master Plan was only a trigger for more widespread protests opposing the increased displacement of farmers and the reallocation of their land to Ethiopian or foreign investors (such as the large flower farms on the outskirts of the capital), often by local administrative officials who are deemed corrupt. The government and the Tigrayan or “associated” political and economic elites were sometimes targeted physically or shouted at in the street. The protesters also complained about the lack of visible benefits of economic development, so lauded by the government, or even the irreducible youth unemployment. The issue is therefore land-based, social, and of course political, as indicated by the rallying sign which has been applied since November 2015, namely the wrists crossed above the head. Nevertheless, caution should be applied regarding the underlying dynamics of these movements. Firstly, because the daily development of the situation does not provide sufficient perspective, and also because the lack of empirical investigations and difficulties in verifying information maintain ambiguity about the parties involved in this crisis. Student movements? Ethnic protests? Spontaneous mobilisations or government provocations to justify a harsh response by the security forces? Protests by local officials against their bureaucratic and partisan machinery? Destructive strategies by armed groups which have infiltrated these mobilisations? So many questions which remain open, which are not mutually exclusive, and for which we should be wary of too hasty answers.

The state of emergency

Two major developments expedited the introduction of the state of emergency from October 9th, 2016. The first one concerned the increase in violent episodes in the Amhara region and the fear that a possible Amhara-Oromo alliance is spreading. For the past few years, tensions have been increasing in the Amhara region, particularly about the political and administrative status of some nations. Added to this, is the question of redefining the border between the Amhara region and Sudan, once again to the detriment of the Amhara region. Finally, the opposition Amhara elites have reacted strongly to the forced displacement of Amhara populations in other provinces (particularly the Gambella region in the west). So many reforms criticised as a policy of weakening engineered by the EPRDF. Protests expressing discontent assumed a greater importance during the summer of 2016, and, much more worryingly for the Ethiopian government, talk emerged about a possible combination of forces between Amhara and Oromia, which would thus represent more than 60% of the population. This new initiative seems to have been started by the diaspora, but its adoption in Ethiopia would need to be able to be evaluated.

The second event concerned the tragic stampede, which occurred on October 2nd, 2016 during an Oromo ceremony (Irreecha) at Bishoftu, about 40 km from Addis Ababa. While tens of thousands of people gathered, the religious ceremony took on a political turn, when groups started to chant anti-government and anti-Tigray slogans, sometimes crossing their wrists above their head. The police shot in the air and used tear gas, but a part of the scattered crowd was trapped by falling into the large adjacent ditches where at least 50 people died. Five days of national mourning were immediately announced by the government, but the situation deteriorated: dozens of economic facilities (130 according to the government, including flower farms, cement factories, or government farms) associated with the government or foreign investors were targeted and a lot of equipment was destroyed or damaged. During these “five days of rage”, violent and armed groups may have caused the crowds, and in others, they may have been prevented from acting by the local inhabitants.

On October 9th, the state of emergency for a period of six months was publicly announced. Article 93 of the Constitution was invoked to formally curb the “anti-peace” elements and “foreign influences”. A Command Post was formed, under the orders of the Prime Minister, and mainly includes the Minister of Defence, the Chief of Staff of the Armed Forces and the Head of the Federal Police. The following week, the Council of Ministers adopted a series of measures listed the following day on national television: a curfew from 18.00 to 6.00 around government sites and industrial facilities, a delineation of “red zones” along major roads and in some cities, access to any website related to “terrorist” networks prohibited, and even a requirement for diplomats to obtain permission to go beyond a radius of 40 km around the capital.

More than a disruption, above all the state of emergency provides a legal framework for a state of emergency which in fact already existed. This also enables the government to use more wide-ranging means of action (more than 2,000 people may have been arrested since October 9th [3]), since it knows that it has to calm the situation as quickly as possible, if it does not want to further erode the trust of investors directly affected by the protests. Unsurprisingly, it is a red herring for the chaos and is trying to depoliticise the protests by presenting them as manipulated from abroad[4]. The role of foreign influence is still difficult to assess, but it is certain that the movements, which assumed a particularly violent turn a year ago, are rooted in contemporary Ethiopian political life.

This crisis is explained both by the deep turmoil within the EPRDF (deprived of its head Meles Zenawi who died in 2012), and by real popular discontent with the regime’s authoritarian practices. The EPRDF seems to have realised this, but appears incapable of rethinking its ways of governing. The opposition parties are calling for new general elections (the EPRDF having won 100% of the parliamentary seats in 2015). However, the government’s response for the time being is uncompromising: they will have to wait until 2020.

[2]. See the recent Human Rights Watch report and the compilation of some videos on the organisation’s website: www.hrw.org.

[4] The charges are against Egypt (due to tensions related to the construction of the Ethiopian Nile Dam), Eritrea, the Oromo Liberation Front (founded in the 1970s and briefly a member of the provisional government in 1991-1992, the OLF acts clandestinely within the diaspora, but is very weakened in Ethiopia), and Ginbot 7 (founded by Berhanu Nega after his release in 2007 and since his exile in the United States, Ginbot 7 has maintained close relations with the Eritrean government, nevertheless, its capacity for action is difficult to assess).