The Covid-19 pandemic has laid bare a series of troublesome truths, both about healthcare infrastructures in Western nations and the state of their democracies.

The quarantine they prescribed, albeit after periods of irresoluteness, drew embarrassing parallels to measures taken by China just a few weeks earlier. Social life has come to a near standstill without citizens being given a chance to deliberate, as procedures were discussed for the most part in closed-door meetings between the executive branch and appointed experts: the White House Coronavirus Task Force in the United States, the Scientific Council of France, etc. The general public has been hardly more involved in the West than in China.

In contrast, South Korea has thus far been the only significantly affected country to contain the spread of Covid-19 without shutting itself down or compromising even temporarily democratic institutions. 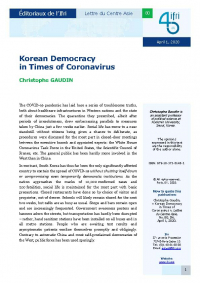 As the nation approaches the marks of 10,000 confirmed cases and 200 fatalities, social life is maintained for the most part with basic precautions. Closed restaurants have done so by choice of visitor and proprietor, not of decree. Schools will likely remain closed for the next two weeks, but cafés are as busy as usual. Shops and bars remain open and are increasingly frequented. Government awareness posters and banners adorn the streets, but transportation has hardly been disrupted – rather, hand sanitizer stations have been installed on all buses and in all metro stations. People who are awaiting test results and asymptomatic patients confine themselves promptly and obligingly. Contrary to autocratic China and most self-proclaimed democracies of the West, public force has been used sparingly.

Korean authorities have undertaken two main policies to achieve this result, which contrasts sharply with the lockdowns in place elsewhere in the world. The first one, systematic testing (free of cost on a doctor’s referral) can hardly be argued to infringe upon one’s human rights, as it is performed on a voluntary basis. Even more so, judicial process in seeking warrants explains in part the delayed detection of the initial cluster at an evangelical church in Daegu, the country’s fourth-largest city, in mid-February. Some 350,000 tests have been conducted and no one has been denied testing under any circumstance, as opposed to the shortage of kits in the West. This was made possible from the get-go in South Korea through the mass production of tests put into motion as early as January, before the country even had its first confirmed case.

The other major containment policy, contact tracing, is considerably more questionable in respect to the safeguarding of human rights. When a patient is diagnosed, the relevant agencies trace all movements from the suspected time of transmission, using cell phone location data, credit card history and reviews of CCTV footage. These movements are released publicly, excluding of course the individual’s name, so area residents or visitors on a diagnosed person’s itinerary can determine whether they may be at risk or not. SMS notifications are sent regularly by local district governments. Transparency clashes very openly with privacy on this occasion, but such an infringement is precisely happening under the constant popular pressure that has become intrinsic of Korean democracy over the last few years.

The current president, Moon Jae-in, was elected to office after the impeachment of Park Geun-hye, daughter and political heir of Park Chung-hee, the dictator who ruled South Korea from 1963 until his assassination in 1979. For personal as well as strategic reasons, Moon, a former human rights lawyer, always endeavors to distance himself from his predecessor, notably the secretive way the Park administration handled the (significantly more limited) 2015 MERS (Middle East Respiratory Syndrome) epidemic outbreak, in particular refusing from the outset to disclose the facilities where patients were being treated.

The mass demonstrations against Park in 2016-2017 and her subsequent imprisonment for corruption have caused a political fever that has never fully abated. Petitions are published on the presidential Blue House website for citizens to raise their concerns, with the government required to officially answer those that have reached 200,000 signatures over a period of one month. It is particularly difficult for a politician like Moon, elected on a social welfare and human rights platform, to turn a blind eye to them. Many are legitimate, while some are blatantly anti-democratic such as “Forcefully Disband the Shincheonji Church” [where the virus initially spread and whose some members declined any testing] (1.4 million signatories) or “Ban All Chinese Arrivals” (750,000 signatories).

The same paradox occurs anytime a discriminatory demand is voiced, regarding a cult, a nationality or any other minority. However, it is worth noting that, so far, no demand of this kind has come to fruition under the current administration. Very often, the counterpoise surges from direct democracy itself, with a counter-petition being quick to emerge. For instance, when citizens rally to impeach the president, others express their support, resulting in a relative draw. Popular pressure never stops, no matter what, for better and for worse, but contrary to locked-down countries, some form of democratic control has been exercised all along.

Crisis, in its Greek origin “κρίσις”, is etymologically a time of “judgement” or “decision”. It denotes a time to judge one’s resilience, and henceforth enact decisions that are most likely to leave a long-lasting footprint. In this moment of truth, not only does South Korea exhibit an objectively better record regarding public health, as it has been extensively noted, but also public liberties. Although a serious threat of an “imperial presidency” (as Koreans refer to it) has always been lingering in the country and may even find in the future a way to reinforce itself through online plebiscites, political participation cannot be argued to have stalled in recent weeks. In the West, by contrast, public opinions have been purely and simply incapacitated. It is not certain that democracy has less to fear right now from the latter than the former.