Following the May Federal election, Australia has its first centre-left government in close to a decade, led by Prime Minister Anthony Albanese. 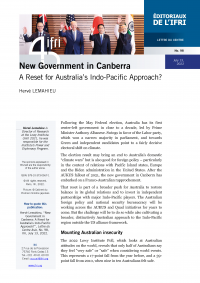 Swings in favour of the Labor party, which won a narrow majority in parliament, and towards Green and independent candidates point to a fairly decisive electoral shift on climate.

The election result may bring an end to Australia’s domestic ‘climate wars’ but is also good for foreign policy – particularly in the context of relations with Pacific Island states, Europe and the Biden administration in the United States. After the AUKUS fallout of 2021, the new government in Canberra has embarked on a Franco-Australian rapprochement.

That reset is part of a broader push for Australia to restore balance in its global relations and to invest in independent partnerships with major Indo-Pacific players. The Australian foreign policy and national security bureaucracy will be working across the AUKUS and Quad initiatives for years to come. But the challenge will be to do so while also cultivating a broader, distinctively Australian approach to the Indo-Pacific region outside the US alliance framework.

The 2022 Lowy Institute Poll, which looks at Australian attitudes on the world, reveals that only half of Australians say they feel ‘very safe’ or ‘safe’ when considering world events. This represents a 17-point fall from the year before, and a 39-point fall from 2010, when nine in ten Australians felt safe.

Insecurity in an election year normally favours the incumbent government. Indeed, national security was a key part of former Prime Minister Scott Morrison’s campaign strategy. The previous conservative coalition government ran hard on the threat from China, its defence spending record and achievement in pulling off the AUKUS pact with the United States and the United Kingdom.

However, voters – despite their apparent concerns with the world – had a shrewder appreciation of Australia’s international challenges and the qualities of the opposition party. A February opinion poll had Labor ahead in handling relations with China and both parties evenly balanced on dealing with the war in the Ukraine. A majority of respondents (61%) also saw China and the bilateral relationship as a complex issue to be managed rather than a threat to be confronted.

Australia’s Pacific neighbour, Solomon Islands, then dealt the former government a crippling blow with the announcement of a trade and security pact with China a few weeks prior to the Australian general election. The shadow (and now sitting) Foreign Minister Penny Wong described the events that led to the deal as the worst Australian foreign policy failure in the Pacific since 1945. The government was accused of neglecting Australia’s near region. Debate shifted from a focus on national security to international relations more generally. The Solomons-China deal led to questions about the government’s perceived failings in regional diplomacy, including cuts to aid spending and its weak record on climate policy. Labor made the case that Australia could not be a constructive partner to Pacific Island states so long as its government was not seen to be addressing the single biggest security threat confronting them: rising sea levels.

As such, the outgoing government’s reluctance to do more on climate change was exposed as a weakness in both domestic politics and international security. On Saturday 21 May, voters in cities and rich suburbs abandoned the Liberals, the larger party in the conservative coalition, for Labor, independent and Green candidates calling for stronger climate action.

The election was a watershed for Australia. Not only has it led to the first change of government in nine years; it also marks the first time that an Australian prime minister has come unstuck for doing too little, rather than too much, to curb climate change.

The new Labor government has set a goal to cut emissions by 43% by 2030, compared with 2005 levels – up from the coalition’s 26-28%. It will focus on cleaning up electricity generation, the biggest source of Australia’s carbon emissions. Most of the country’s power comes from coal; in 2020 less than a quarter came from renewables. The Albanese government wants to raise that to 82% over the next eight years.

Though not wildly ambitious by the standards of most European countries, Australia’s strengthened climate commitments are core to the identity of the new government’s foreign policy. A focus on climate has reaped early dividends when it comes to Australia’s relations in the Pacific, Europe and with the Biden administration in the United States.

Inroads with the Quad, the South Pacific, France and China

Over the past two months, the prime minister and leading figures within his new government have embarked on intense shuttle diplomacy and largely succeeded in four early objectives that strike a balance between continuity and policy change:

Despite a number of foreign policy wins, the government must now brace for the long slog ahead. Much of its early progress abroad speaks of the diplomatic failures of the previous government more so than they do of the acumen of the new one. The Albanese government’s honeymoon period is approaching its end, and the question is what comes next after the diplomatic low-hanging fruit has been picked.

The central challenge in Australian foreign policy is the need to square the circle between two objectives: building a strategic counterweight to China with like-minded partners on the one hand and, on the other, co-operating with a more geopolitically diverse set of countries in shoring up the regional order.

The foreign minister has spoken of the need for Australia to achieve a “strategic equilibrium” in the region. The term marks an interesting departure from the usual articulation of Canberra’s objective of forging an effective regional balance of power. It creates space to articulate several things:

The new government also appears to be nuancing a one-size-fits-all strategic approach to the Indo-Pacific in favour of more sub-regionally tailored articulations of Australia’s national interests.

There are broadly three concentric rings in Australia’s Indo-Pacific strategy, each defined by a distinct set of circumstances and challenges. The first is a Pacific “inner ring” where Australia must reinforce its position as the leading provider of public goods – whether in terms of addressing security challenges or the threat posed by climate change to the Pacific Islands.

Then there is an “outer ring” of major powers, the very countries that have formed the Quad or AUKUS, and beyond that, those in Europe with Indo-Pacific interests. Australia’s standing among democracies fringing the Indo-Pacific has never been stronger. The prime minister’s presence at the NATO summit in Madrid in June shows a broad convergence of strategic interests is at hand. Amid Russia’s war in Ukraine, there is stiffening of resolve by liberal democracies in standing up to authoritarian states including China.

However, the fact remains that there is a missing middle in Australia’s Indo-Pacific strategy. Canberra has experienced a loss of relevance and strategic drift at the centre, in Southeast Asia.

A new bipolar front in Europe has galvanised Western unity. But the ripple effect from the Ukraine war has played out differently in Southeast Asia, hastening the arrival of what Richard Maude at Asia Society has termed a “trifurcated order”.

There are clear geopolitical antagonisms, but on the main axis in Southeast Asia, this does not add up to consolidated blocs. What we are seeing instead is the formation of polarities rather than blocs.

Southeast Asia is not homogenous. There exist pronounced differences between actors situated on a spectrum between the geopolitical poles – from active ‘hedgers’ such as Singapore to those comfortable with de facto Chinese hegemony such as Cambodia.

However, even the most strategically minded actors in Southeast Asia will not join Australia in balancing coalitions such as the Quad. Instead, most resident countries will hedge doggedly in between the two strongest poles: the United States and China.

Balancers and hedgers: bridging the gap

The challenge for Canberra then is to communicate a vision of its Indo-Pacific strategy that resonates beyond a coterie of the converted. In particular, Canberra must look for ways to bridge the divergence between two camps of middle powers: between the balancers and the hedgers.

Wong’s call for strategic equilibrium in that sense creates space to recognise that middle powers, including Australia, will take different positions in respect of the great powers but can still find common ground on the role and purpose of the ASEAN-led regional architecture, and the importance of ensuring the sovereignty of smaller states within it.

Above all, Canberra will seek to underline that shaping the balance of power and shaping the regional order are distinct pursuits. Australia must engage the middle powers of Southeast Asia on their own terms and concerns. Whether the region can continue to be defined by a common peace and a common prosperity that maximises the options for all its players, large or small, is a first-order concern for the new government. After a number of early wins, what’s needed now is greater differentiation in Australia’s engagement in the three theatres of the Indo-Pacific, and a greater appreciation of the types of diplomacy required in each.

Building Bridges over the Blue Pacific. Beyond Marine...
END_OF_DOCUMENT_TOKEN_TO_BE_REPLACED
Asia after the War in Ukraine: Re-imagining multilateralism and the risk of...