On the occasion of the conference held on the 22 November 2018 marking the 160th anniversary of Franco-Japanese diplomatic relations, Ifri publishes two parallel articles offering French and Japanese perspectives on the bilateral security partnership. Michito Tsuruoka's analysis of Japan's point of view is available here. 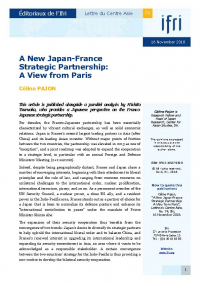 For decades, the Franco-Japanese partnership has been essentially characterized by vibrant cultural exchanges, as well as solid economic relations. Japan is France’s second largest trading partner in Asia (after China) and its leading Asian investor. Without major points of friction between the two countries, the partnership was elevated in 2013 as one of “exception”, and a joint roadmap was adopted to expand the cooperation to a strategic level, in particular with an annual Foreign and Defense Ministers’ Meeting (2+2 summit).

Indeed, despite being geographically distant, France and Japan share a number of converging interests, beginning with their attachment to liberal principles and the rule of law, and ranging from common concerns on unilateral challenges to the international order, nuclear proliferation, international terrorism, piracy, and so on. As a permanent member of the UN Security Council, a nuclear power, a close US ally, and a resident power in the Indo-Pacific area, France stands out as a partner of choice for a Japan that is keen to normalize its defense posture and enhance its “international contribution to peace” under the mandate of Prime Minister Shinzo Abe.

The expansion of their security cooperation thus benefits from the convergence of two trends: Japan’s desire to diversify its strategic partners to help uphold the international liberal order and to balance China, and France’s renewed interest in upgrading its international leadership and expanding its security commitment in Asia, an area where it wants to be acknowledged as a responsible stakeholder. A certain convergence between the two countries’ strategy for the Indo-Pacific is thus providing a new motive to develop the bilateral security cooperation.

The bilateral security cooperation has thus expanded, and been gradually institutionalized. Beyond the annual 2+2 meeting, an agreement on the transfer of defense equipment and technology, in force since December 2016, has opened way to joint research and development of new-generation underwater minesweeping technology. In July 2018, an acquisition and cross-servicing agreement (ACSA) was signed to allow the sharing of defense supplies and services, an important step to expand cooperation in peacekeeping and humanitarian assistance and disaster relief (HA/DR) operations, and facilitate more ambitious joint exercises.

So far, the bulk of bilateral cooperation has been focused on maritime security, mostly in Asia, where Japan is taking part in HA/DR joint training held by France in the South Pacific, for example, and also in the Gulf of Aden with the participation of multinational anti-piracy operations. In recent years, joint exercises have been upgraded and expanded with quadrilateral drills on amphibious operations held in spring 2017 between Japanese, French, US and British ships as part of France’s “Jeanne D’Arc” mission near Guam. In February 2018, a sea-control exercise was conducted for the first time with the Frigate Vendemiaire based in New Caledonia, and in spring 2018, two Japanese P-1 airplanes held maritime patrol training in France. Beyond the multiplication of port calls and joint exercises, France and Japan are looking to expand their coordination on maritime capacity-building assistance activities in Southeast Asia, South Pacific and Africa. Obviously, the stability of the Indo-Pacific region is an important common interest for the two countries. With its blue-water navy, its territories and pre-positioned military forces in the Indian Ocean and the Pacific, France has a unique position amongst Europeans to contribute to the security and better governance of the commons in this strategic region.

Other areas of cooperation include Africa, where the two countries have had neighboring bases in Djibouti since 2011. A 2015 Joint Plan for Africa provided grounds for modest cooperation such as joint funding of peacekeeping schools on the continent, exchange of information, and protection of nationals. Cooperation with France to better understand the complex security environment in Africa, especially in the context of increasing terrorist attacks (10 Japanese citizens died during the In Amenas attacks in January 2013), has been key, as Tokyo wants to expand its economic presence there. In 2016, Japanese defense attachés were trained in France. In exchange, Paris would like to see Japan contributing to funding some security-related activities in the Sahel and West Africa, but also expect Japan’s backing for French entry to some multilateral security cooperation forum in East Asia, such as the ASEAN Defense Ministers’ Meeting Plus (ADMM+).

The two countries’ latest joint statements express ambition for a long-term security relationship through expanding cooperation in fields such as space (a Japanese X-band defense communication satellite was launched from French Guiana in March 2018), space-based maritime surveillance and cyberspace.

In recent years, France has been stepping up its security commitment in Asia, a move that meets Japan’s expectations. The 2017 Strategic Review of Defense and National Security thus clearly acknowledges the importance of the stability of the Indo-Pacific region for the national interest. A “nation of the Indo-Pacific region”, with 1.5 million nationals and a large exclusive economic zone, France maintains a military presence of 7,000 personnel, from Djibouti to La Reunion, New Caledonia and French Polynesia. French trade also relies heavily on maritime routes of the Indian and Pacific Oceans. In addition, two major defense equipment contracts signed in 2016 with India (for 36 Rafale fighters) and Australia (for 12 submarines) point to a long-term security commitment in the region.

In particular, France is keen on actively demonstrating its commitment to the freedom of navigation and rule-based order in Asia. It is now taking the lead in Europe in this respect. In 2016, the Statement of the then Minister of Defense Jean-Yves Le Drian at the Shangri-La Dialogue emphasized the need to discourage unilateral coups de force in the China seas, for fear that such actions might expand in other strategic areas like the Mediterranean Sea, and called for coordination between European navies to ensure a regular and visible presence in Asian waters. While not taking sides on sovereignty matters, Paris has thus consistently conducted its own quiet Freedom of Navigation patrols in the South China Sea in recent years, encouraging other European countries to join. In this respect, British troops and helicopters joined the Jeanne D’Arc Mission last year, and UK ships sailed along the French ones this year. After Brexit, France will be the only EU member state able to regularly deploy its forces to Asia Pacific. This renewed French commitment is matching Japan’s intention to stand up to any illegal features of Chinese maritime expansion.

Japan as an essential piece in the French Indo-Pacific strategy

The future direction of Franco-Japanese security cooperation will be related to the updated, comprehensive French strategy for the Indo-Pacific[1] under review in 2018. As it has limited means to defend its interests and contribute to regional stability, France is developing a network of strategic partnerships with India, Australia, Japan, Malaysia, Singapore, New Zealand, Indonesia and Vietnam.[2] During his visit in Australia back in May 2018, President Macron referred to a “Paris-Delhi-Canberra axis”. This axis is bound to expand, and may lead to an aspirational regional initiative focusing on the governance of the commons, including maritime security, with Japan playing an essential role. The unusual translation into Japanese of an official booklet from the French Ministry for the Armed Forces, on “France and Security in the Indo-Pacific”, is a strong signal of French expectations regarding cooperation with Tokyo.[3]

In March 2018, Paris signed with New Delhi a common strategic vision for the Indian Ocean, stating that third countries would be associated in the growing Franco-Indian cooperation through trilateral dialogue and joint exercises.[4] The Vision Statement between France and Australia, signed in May 2018, similarly refers to close cooperation with likeminded partners in the region, though trilateral or high-level dialogue.[5] The ultimate aim is to build up an open, inclusive and transparent cooperation architecture that will allow a shared maritime domain awareness in order to prevent or manage crisis resulting from environmental issues, natural disaster, or crimes at sea. A first Franco-Japanese maritime dialogue to be held this year demonstrates the French interest in closely associating with Tokyo.

Limitations and challenges ahead

This new French approach opens up cooperation opportunities for Japan, but also presents challenges with regard to Tokyo’s conception of its own Free and Open Indo-Pacific (FOIP) strategy. In particular, Japan’s initiatives and rhetoric are sometimes seen in France as being too confrontational toward China. Paris is also reluctant to join the Quadrilateral Dialogue that Japan pushed with Australia, India and the US, as it may be interpreted as an anti-China coalition of democracies. Rather, French officials highlight the importance of engaging with China and encouraging Beijing to play a role of responsible stakeholder while discussing the future of multilateralism and global governance. This perception gap on China is important and enduring, as Tokyo is still suspicious of Paris selling dual-use equipment to Beijing, despite the bilateral consultation forum on defense export controls set up in 2013 to reassure Japan. Moreover, Japan has been consistently asking France to clarify its stance toward China, while Paris considers “megaphone diplomacy” to be counterproductive.

Other differences between the two countries may also emerge regarding the nature of the security challenge posed by Russia, as Tokyo has been courting Moscow despite the Crimea annexation in 2014.

More generally, frustration may arise in Paris if Tokyo’s commitment to shift from checkbook diplomacy to a more tangible security contribution is slow to concretize, and – as Japan remains very much US-centered – in particular in terms of defense procurement. Finally, many Japanese officials still perceive the UK as a more capable security partner than France in Asia – and certainly as a more US-compatible ally than Paris. A general under-estimation in Tokyo of the advantages of deepened Franco-Japanese security cooperation may be a natural brake to the expansion of the strategic partnership.[6]

[3]. See “France and Security in the Indo-Pacific – 2008 Version” [in Japanese], French Ministry for the Armed Forces, https://jp.ambafrance.org.

[4]. Joint Strategic Vision of India-France Cooperation in the Indian Ocean Region (New Delhi, 10 March 2018). On the website of the Ministry of External Affairs of India: www.mea.gov.in.

Building Bridges over the Blue Pacific. Beyond Marine...
END_OF_DOCUMENT_TOKEN_TO_BE_REPLACED
Asia after the War in Ukraine: Re-imagining multilateralism and the risk of...