The Taboo of the Armenian Genocide, Part Two: The Politics of American Avoidance Repères sur la Turquie, No. 15, June 2016

The Armenian Genocide has been a topic of trials and tribulations in American politics for quite some time.  It has been an issue in Presidential campaigns, like that of now-President Obama: when he promised to recognize it. It has been the topic of votes, such as the most recent 2010 vote which failed to recognize the genocide. It has been a funnel for interests, lobbying, and foreign investment. With Germany recently recognizing the genocide and an American Presidential election at hand, speculation of American recognition is once again at a high. As politicians debate the issue, or avoid it altogether, the American political system moves forward. There are various key players in American politics, but in specificity to the Armenian Genocide issue, there are the Armenian, Turkish, and Israeli lobbies, and the constituencies they represent. 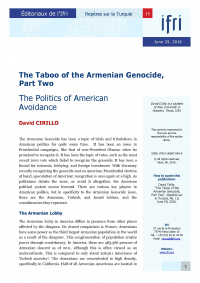 The Armenian lobby in America differs in presence from other places affected by the diaspora. Its closest comparison is France; Armenians have some power as the third largest Armenian population in the world as a result of the diaspora. This conglomeration of population creates power through constituency. In America, there are 483,366 persons of Armenian descent as of 2011, although this is often viewed as an underestimate. This is compared to only about 206,911 Americans of Turkish ancestry. The Armenians are concentrated in high density, specifically in California. Half of all Armenian Americans are located in just twenty congressional districts. The city of Glendale, California is made up of around 200,000 people; 40% of that population is Armenian, with Armenians also holding a majority of seats on the city council since 2005. Glendale voted for the recognition of an Armenian genocide Commemoration Day in 2016, unanimously passing the resolution. Where this expands to national influence is via the national representatives and groups sprouted from a localized majority. Adam Schiff was elected to congress in 2003, representing the 28th district of California which includes Glendale. Schiff has based a significant amount of his platform and time in congress on Armenian issues, such as the Armenian genocide. In 2007, Schiff introduced US House Resolution 106, a bill intended to officially recognize the Armenian genocide. He has also advocated strongly for Presidential recognition of the genocide, in 2016 saying, “Mr. President, for them and for their descendants, the word ‘genocide’ is sacred because it means the world has not and will not forget. To deny genocide, on the other hand, is profane”. This type of representation goes far, as do public figures such as the Clooneys and Kardashians, celebrities of Armenian descent who openly support the cause of recognition. Furthermore, organizations such as the Armenian National Committee of America and Armenian Assembly of America are quite active in their lobbying efforts of the United States government. They have succeeded in some fronts, such as having secured the highest amount of American aid of any country other than Israel up until the most recent years of the Obama administration.

However, its problem is just that: it is a localized effort. Local governments with large Armenian constituents support recognition, as do many senators and congressman, especially when from states with larger Armenian populations, but that seems to dissipate in national office. Then-congressman Ford in 1965 fully noted the genocide of Armenians and supported recognition; when he became President in 1975, he fought against a resolution declaring April 24th as ‘National Day of Remembrance of Man’s Inhumanity to Man’, in part recognizing the Armenian genocide. The resolution failed. This is not only a past history of evolution on the issue when diverted to a national position. Bill Clinton made a campaign pledge to recognize the genocide. So did George W. Bush. Neither did. In 2006, while still Senator Obama, after criticizing the Bush Administration for refusing to recognize the genocide, he promised, “As president I will recognize the Armenian genocide”. But when President, that sudden acknowledgement tends to disappear. President Obama has commemorated the events every year of his presidency, but has avoided using the word “genocide” in his remarks to commemorate the massacre, describing it as “meds yeghern,” an Armenian term meaning “great calamity”. As Obama's current Ambassador to the United Nations, Samantha Power, wrote in 2002, "No U.S. president has ever made genocide prevention a priority, and no U.S. president has ever suffered politically for his indifference to its occurrence. It is thus no coincidence that genocide rages on”. Hillary Clinton, the Democratic nominee for President, was a fervent supporter of resolutions recognizing the Armenian genocide throughout her tenure in the United States Senate; she also served as a senator from New York, one of the states with the largest Armenian populations alongside California and Massachusetts. However, as Secretary of State under President Obama, Clinton has chosen to oppose resolutions in favor of its recognition, referring to the killings as “a matter of historical debate”

To keep reading this editorial, please download the file below.

Naval Combat Redux: A Renewed Challenge for Western Navies
END_OF_DOCUMENT_TOKEN_TO_BE_REPLACED
Is the UN Security Council still relevant? France and Japan's views on the future of...