The major transformations that are occurring on the Chinese gas market have profound repercussions on the global gas and LNG markets, especially on trade, investment and prices. In just two years, China has become the world’s first gas importer and is on track to become the largest importer of Liquefied natural gas (LNG). 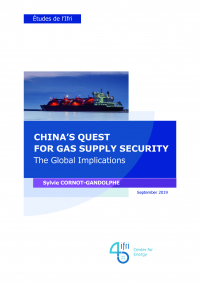 China alone explained 63% of the net global LNG demand growth in 2018 and now accounts for 17% of global LNG imports. The pace and scale of China’s LNG imports have reshaped the global LNG market. Over the past two years, fears of an LNG supply glut have largely been replaced by warnings that the lack of investments in new LNG capacity would lead to a supply shortage in the mid-2020s unless more LNG production project commitments are made soon. There is now a bullish outlook for future global LNG demand which has encouraged companies to sanction additional LNG projects, based on the anticipated supply shortage. China’s gas imports can be expected to continue to grow strongly, from 120 billion cubic meters (bcm) in 2018 to up to 300 bcm by 2030.

The United States (US)-China trade war has not prevented US developers from investing in new liquefaction trains so far but without China’s equity or contracts: out of the seven LNG export projects sanctioned between October 2018 and August 2019, three are in the US. However, since the imposition by China of a 10% tariff on US LNG in retaliation to US tariffs on Chinese goods, Chinese imports of US LNG have collapsed.

China also leads the global and Asian spot LNG purchases, and has become a key driver of the evolution of Asian spot LNG prices. Europe has now become a premium market for Atlantic LNG suppliers. European LNG imports have surged, notably LNG imports from the US, but also from Russia’s Yamal LNG. The surge in LNG imports has depressed European spot prices, which have collapsed to ten-year lows in June 2019.

The purchasing behaviour of China’s LNG importers has also an indirect impact on the storage market, notably in Europe. In 2019, low LNG spot prices and weaker spot demand in Asia have helped Europe to fill its underground gas storage (UGS) to more than average summer levels. Currently, China’s LNG imports peak in winter but the seasonality of China’s LNG imports is evolving with a second peak in summer. This peak is expected to increase in the future with new UGS capacity commissioned in the country that will need to be refilled before the winter. The expansion of UGS will help stabilize seasonal demand and price fluctuations in China. In turn, this will impact the seasonality of global LNG trade flows. Furthermore, as China is becoming the largest LNG market, the country is also expected to have more pricing power. The recent decoupling between spot and oil-indexed LNG prices and China’s political will to develop a China gas benchmark and eliminate the “Asian LNG price premium” could accelerate the move. Looking ahead, the Shanghai Exchange could become a key trading hub for China’s domestic gas market, but also a reference for Asian and global LNG prices, as well as for China’s imported gas by pipeline. It would reinforce the role of the renminbi on the energy market, which is Beijing’s objective.

To tackle security of supply issues, China has diversified its gas supplies, routes and modes of deliveries yet security of gas supply remains a major concern for Chinese policy makers. Growing gas import dependency, domestic winter supply tightness, but also the trade war with the US have led the Chinese government to reinforce and improve its security of gas supply policy. Russia is playing a key role in this perspective. As a buyer or an investor, Chinese participation in key gas export projects will shape future global gas trade, but also energy and economic development in the related countries.

The EU’s Renewables Expansion Challenge Towards 2030:...
END_OF_DOCUMENT_TOKEN_TO_BE_REPLACED
Neutrality and non-alignment after the Russian Invasion of Ukraine...