The Russian-Iran Partnership in a Multipolar World Russie.NEI.Reports, No. 37, Ifri, March 2022

The strengthening of the partnership between Russia and Iran depends on overlapping security interests; bilaterally, regionally and on the world stage. 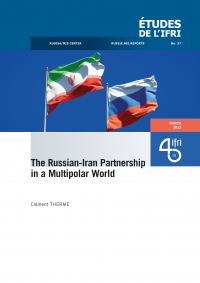 The Russian-Iran Partnership in a Multipolar World Download
0.75 Mo

Tehran has pursued a regional policy program that is largely in line with Russia’s interests, whether these relate to Syria (from 2011), the Caucasus, Central Asia, or Afghanistan (since 1991).

This security dimension was already one of the foundations of the bilateral relationship in the post-Cold War-period. It has now appeared in regional dealings between Tehran and Moscow. In addition, the decline of US international predominance, which has been apparent since the 2000s, has allowed Russia and Iran to develop a shared ideological discourse in opposition to “Western values”.

Beyond this shared ideological basis, Tehran has developed a true “Realpolitik” whereby it relies on Russian foreign policy to relieve US pressure on Iran that is aimed at regime change or, at the very least, a change in the behavior of the Islamic Republic. In other words, in seeking to preserve intact the main ideological tenets of its regime, Tehran has added a new dimension to its relationship with Moscow.

Since 1991, this relationship has become a matter of survival for a regime that faces both popular opposition at home and external pressure from Washington: pressure that increased during the Trump administration of 2017-2021.

Clément Therme is an Associate Researcher at the European University Institute in Florence and an Associate Member of the Centre for Turkish, Ottoman, Balkan, and Central Asian Studies (CETOBAC) at the School for Advanced Studies in the Social Sciences (EHESS).