Catching Up or Staying Ahead. Japanese Investment in the Mekong Region and the China Factor Asie.Visions, No. 99, May 2018

There is no denying that the Mekong region has become an economic battleground where Japan and China are competing to gain and sustain economic influence in the region. 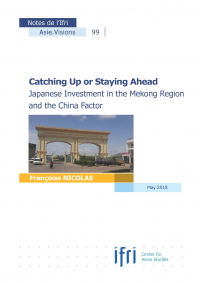 Catching Up or Staying Ahead: Japanese Investment in the Mekong Region and the China Factor Download
1.32 Mo

However, each country has managed overall to create or maintain its own sphere of influence in the so-called CLMV (Cambodia, Laos, Myanmar and Vietnam) thus reducing the risk of direct head-to-head competition. Even within one single country, Japan and China tend to be involved in different areas, in different types of activities and through different instruments, thus avoiding real confrontation. Japanese investment in the CLMV exhibit a number of characteristics that set it apart from Chinese investment.

First, a major feature of Japanese investment in the CLMV is its concentration in Special Economic Zones. Secondly, in addition to cheap labor, some Japanese firms also seek to make the best of Cambodia’s and Lao’s proximity to Thailand, following the so-called Thailand+1 strategy, and transferring the most labor-intensive part of their production process to countries where labor is much cheaper than in Thailand. Indeed, as the historical basis of production for Japanese companies, Thailand lies at the heart of vertically integrated regional production networks. Thirdly, Cambodia, Lao PDR, Myanmar and Vietnam are not exclusively perceived by Japanese investors as potential sources of cheap labor. Due to the rise in their GDP per head over the past few years, they are also increasingly perceived as potential markets.

Infrastructure development is arguably the area where competition, between Japan and China is most direct in the Mekong region. Japanese companies and government agencies have had a long head start in infrastructure investment in the region. In particular, ODA-backed infrastructure clearly helped Japanese manufacturing companies to construct production networks on the basis of division of labor among different countries.

In an effort to better connect its southern provinces to the Mekong region, which constitutes a natural backyard, China has also recently engaged in infrastructure investment, and even more so over the past few years in the context of the recently launched Belt and Road Initiative (BRI). As a result, the Mekong region has become a battleground between the two big regional powers.

Behind economics, however, the two countries are also competing for political influence, and their commitment to development promotion, and in particular to infrastructure development, may be instrumentalized with strategic objectives in mind. While Japan’s interest in assisting infrastructure development in the region is nothing new, the country’s approach has apparently changed under China’s pressure and has become more “strategic” and to a large extent “politicized”. This is perhaps where the impact of the China factor has been the largest on Japan’s stance vis-à-vis the region.

Rapprochement in Times of Crisis: War in Ukraine and the...
END_OF_DOCUMENT_TOKEN_TO_BE_REPLACED
Neutrality and non-alignment after the Russian Invasion of Ukraine...