China's Social Credit System remains a poorly understood combination of rating schemes and blacklists, but the consequences for individuals and businesses are very real. 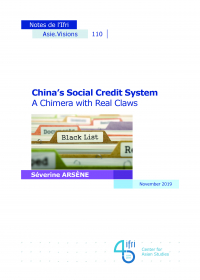 Since the State Council published a “Planning Outline for the Construction of a Social Credit System (2014-2020)”, all administrations and localities in China have been busy figuring out ways to develop social credit systems relevant to their own jurisdiction, while a few corporations have also been experimenting with private social credit ratings, more akin to loyalty schemes, in conjunction with the policy.

From this hotchpotch of experimentation, two distinct instruments are taking shape in the so-called public system: first, personal credit ratings managed by localities, and secondly, blacklists of individuals and companies managed by sectorial administrations (the Supreme People’s Court, the Tax Department, Department of Agriculture, etc). Arrangements across administrations and corporate partners enable the implementation of rewards and punishments attached to the blacklists, while personal ratings carry only perks.

The overall goal of the system is to strengthen law enforcement, in a context where the judicial system fails to properly deal with misdemeanors and where people can get away with repeated infractions. Ratings and blacklists are meant to create additional leverage to encourage and coerce citizens into complying with laws and regulations.

This analysis describes the different features of the often-misunderstood Social Credit System, and uses the metaphor of a chimera to discuss some of its problematic aspects. The chimera, in ancient Greek mythology, is a fantastic, monstrous creature with limbs from different animals, and it has come to symbolize a mismatched assemblage of various parts of a different nature.

Comparing the Social Credit System to a chimera emphasizes its patchwork, decentralized and bureaucratic character. Thus far, the system is an assemblage of heterogeneous indicators and enforcement mechanisms, which differ according to the geographical location individuals finds themselves in, and the kind of personal or professional activities they are involved in. Secondly, the data collection and management is mostly done at the local level or within specific administrations. Contrary to widespread misunderstanding, the system uses data already collected by administrations in their ordinary activities, and not directly data from the surveillance apparatus. It is generally quite low-tech, as such simple lists do not need big data or AI-style processing. Moreover, only the blacklists, rather than the raw data, are channeled onto national platforms for integration and publication, often on a monthly basis and certainly not in real time.

Another angle that the chimera metaphor highlights is that the very idea that all dimensions of one person’s interactions with laws and regulations at various levels can be rounded up into a single indicator is a fantasy. This is the case of personal points systems at the level of municipalities, but even more of the initiatives by private companies that propose credit ratings as a commercial service, based on a vast and heterogeneous range of data. It is these points systems that have most excited the imagination of foreign commentators. Commercial credit ratings use big data and AI technology, and private companies are likely to develop increasingly sophisticated tools for the visualization of public blacklists. The lack of transparency and high risk of algorithmic bias mean that more high-tech does not make these constructions any less chimeric. However, the implications for reputation and risks in terms of misuse of personal data are real.

With blacklisting, on the other hand, more and more individuals and company representatives find themselves confronted with punishments that restrict their mobility, their ability to take loans, or to access certain kinds of jobs, for instance. This coercive mechanism purposely challenges notions of data privacy and proportionality of sanctions, and bears the risk of enforcing extralegal norms at the local level. However, the Social Credit System only amplifies previously existing shortcomings of the rule of law in China, such as excessive data collection or vague norms that can be instrumentalized for commercial or political purposes. This political and regulatory background makes the Social Credit System stand out from global trends, as using points systems (for driving licenses, for example) and blacklists (criminal records) are increasingly common governance instruments around the world.

The Social Credit System has real-life consequences, for individuals as well as for businesses with a foot in China. One has to be wary of myths and yet prepared to pay attention to the concrete impacts of these ratings and blacklists, by looking at the localized, specific measures and countermeasures that involve a variety of actors pulling and pushing the levers of a complex administrative machine.

Neither surveillance nor algorithmic consumerism. Towards...
END_OF_DOCUMENT_TOKEN_TO_BE_REPLACED
Citizen Mobilization: A Solution for Refugee Integration in Europe?