The March 2011 accident at the Fukushima Daiichi Nuclear Power Station turned Japan’s energy policy on its head, shedding a harsh new light on Japan’s energy policy and power supply system, and throwing into relief six major problem areas that had largely escaped scrutiny before the disaster. 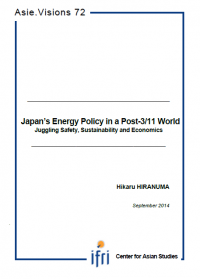 (1) Fragmentation of the power grid under the regional monopolies of Japan’s 10 “general electric utilities” and the resulting failure to develop the kind of wide-area transmission system needed to transfer electricity from regions with a surplus to those suffering shortages.

(2) The low electric supply capacity of entities other than the 10 regional utilities, making procurement of electric power from other sources difficult.

(3) The lack of effective mechanisms for curtailing demand at times when a reliable electric supply is jeopardized.

(4) The inability of customers to choose a power source or supplier.

(5) The failure to manage the energy risks associated with a shutdown of Japan’s nuclear power plants.

(6) The urgent need to confront the risk of severe accidents and other hazards associated with nuclear power facilities.

The pre-quake Strategic Energy Plan announced by the Democratic Party (DPJ) in 2010 put an emphasis on nuclear power as the mainstay of Japan’s energy supply and offered little guidance for addressing these issues. The plan was subsequently rejected, and a new policy was announced by the DPJ to eliminate nuclear power from Japan’s energy mix before 2040. The coalition agreement between the Liberal Democratic Party and the New Komeito Party, which defeated the DPJ in the December 2012 general election, backtracked from the “zero nuclear power” policy, which constituted an important shift from the nuclear-dependent policies of the pre-Fukushima era.

In April 2013, the LDP government of Prime Minister Shinzo Abe approved a document titled Policy on Electricity System Reform emphasizing the need to make use of a wider range of energy sources, and in April this year, the cabinet adopted an updated Strategic Energy Plan aimed at reducing reliance on nuclear power as much as possible and building a flexible, diversified, multilevel supply-and-demand structure.

Many challenges remain to be overcome, however, such as accelerating the use of renewable energy, securing stable and lower-cost sources of fossil fuels, holding down rising electricity costs, and overcoming opposition to restarting nuclear power plants. Challenges related to the liberalization and unbundling of Japan’s power sector are also a lingering cause for concern.

The problems that emerged in the aftermath of 3/11 exposed the existing electricity system’s deep vulnerability. Sweeping reforms will be needed to overhaul this system and reduce reliance on nuclear power by diversifying energy sources.

Electricity system reform will thus be of vital importance. Such reforms will be advanced in a three-stage process under the April 2013 Policy on Electricity System Reform. However, this scheme seems imperfect at best and a number of lingering concerns remain regarding its consistency and efficiency. Electricity system reform is indispensable to rebuilding Japan’s post-Fukushima energy policy and ensuring the success of the Abenomics program of economic growth. Japan must thus carry out drastic electricity system reforms, without being swayed by vested interests.

Hikaru Hiranuma is Research Fellow at the Tokyo Foundation, Japan

Building Bridges over the Blue Pacific. Beyond Marine...
END_OF_DOCUMENT_TOKEN_TO_BE_REPLACED
Asia after the War in Ukraine: Re-imagining multilateralism and the risk of...