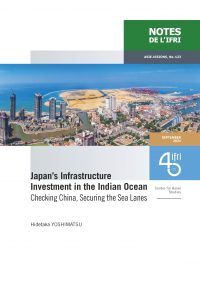 In particular, Japan began to consider the IOR a major destination of investment in maritime infrastructure represented by port facilities. Japan’s increasing engagements in connectivity development are seen in quite a few areas in the IOR such as the ports of Trincomalee and Colombo in Sri Lanka, Mombasa Port in Kenya, Matarbari Port in Bangladesh, and infrastructure facilities on the Andaman and Nicobar Islands in India.

Japan’s engagements in infrastructure and connectivity development in the IOR had much to do with China’s infrastructural push under the Belt and Road Initiative (BRI). Chinese state-owned enterprises have committed to the development of ports and terminals in the region, and the management of port facilities contributed to the increasing presence of the Chinese navy. The IOR offers crucial sea lines of communication (SLOCs) for Japan as Japanese tankers from the Middle East and Europe pass through the waters of the Indian Ocean. China’s increasing maritime presence in the region is likely to be a potential threat to Japan’s sea-line security. Moreover, China’s growing maritime presence leads to undermining Japan’s efforts to maintain a rules-based maritime order.

Japan encounters various challenges in pursuing these strategic objectives of countering China’s growing maritime presence and enhancing the securitization of SLOCs. The first challenge is the formulation of effective initiatives and policies to compete with China’s presence in infrastructure investment in the IOR. Japan needs to strengthen ‘soft infrastructure’, which consists of institutions and procedures that prop up physical infrastructure, such as human capital development and intangible management knowhow, as well as normative standards and principles in infrastructure investment. In this respect, Japan’s commitments to the Asia Pacific Economic Cooperation (APEC) and G20 produced formal policy documents regarding quality principles for infrastructure investment to which the Chinese government has paid due attention.

Moreover, Japan needs to deepen its strategic partnership with India, a country that shares similar concerns about China’s maritime advance in the IOR. India is a crucial partner for Japan as a member of the Quad involving the US and Australia, which has developed since 2017 under the strategic vision of the Free and Open Indo-Pacific (FOIP). The Quad holds a strategic objective to ward off China’s growing geopolitical presence, and maritime security and infrastructure investment have been regarded as key policy agendas for the grouping. A substantial challenge for Japan is how to integrate India in the US-led coalition of democracies, which pursues shared interests in maritime security and infrastructure investment. Japan needs to understand India’s subtle diplomatic position and assist its gradual integration into the US-centered strategic coalition.

Lastly, Japan has to pursue the possibility of collaboration with China in infrastructure and connectivity development. Given that Japan and China have different comparative advantages in infrastructure investment, the effective use of aid funds offered by the two countries under policy coordination will bring about synergetic effects in the economic growth and social upgrading of recipient countries and the comprehensive development of extensive adjacent areas. On this point, Japan must meet the challenge of coordinating a collaborative orientation with confrontational strategies in intensive Sino-US rivalry by forging a common front in domestic politics.

The Political Economy of the Metaverse
END_OF_DOCUMENT_TOKEN_TO_BE_REPLACED
Critical minerals: How to secure stable and resilient supply chains? Views from Europe...